Scandal in the West Wing: A Tale of Two First Ladies 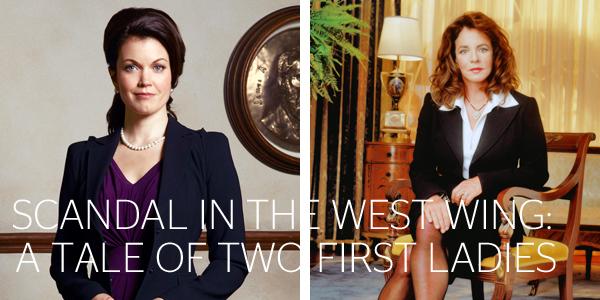 Scandal in the West Wing: A Tale of Two First Ladies

With real-life scandals mounting by the day and seemingly set to simmer for some time in the west wing of the White House, fans of the hit ABC political drama Scandal might think the promotion for the much-anticipated second season finale is going a bit overboard.

And while most of the drama is revolves around Scandal’s principle fixer Olivia Pope (Kerry Washington), there’s an equally heated, though classically second-fiddle, drama unfolding around its First Lady, Mellie Grant.

In last Thursday’s run-up to the finale episode, Grant (Bellamy Young) offers up to the American public the indecent admission that the President, Fitzgerald “Fitz” Grant (Tony Goldwyn) has been having an extramarital affair while in office. The admission, while not shocking to fans, set up what will be one of the finale’s big questions: Will Fitz run for a second term? And if he does, what does the future hold for Mellie?

If the question sounds familiar, it’s because it is.

The last great political television drama, NBC’s The West Wing (1999-2006) had a very similar scenario in the run-up to its second season finale back in 2001. The scandal was the revelation of the President’s multiple sclerosis diagnosis; his mistress, though metaphorical, was Chief of Staff Leo McGarry –but the question, literally: Will the President run for a second term?, and resulting seasons of dramatics was brought on by the fury of the First Lady, this time played by the inimitable Stockard Channing.

So, is it fair to look to West Wing for hints about the future of Scandal? It may come down to Sorkin versus Rhimes. Clinton versus Bush. Or, Grant versus Bartlet.

The similarities between Grant and The West Wing’s resident First Lady Abbey Bartlet are numbered. Both attended Harvard University (Grant later moved on to Yale for her JD, while Bartlet stayed at Harvard for her MD); both are slim, outspoken brunettes, Mothers to three children and both admittedly gave up accomplished careers to support their husbands, of which they both make a point to bring up in a crunch. Though both are shown to be loyal to a fault, and are often portrayed as carrying the heavy weight of their own ambitions, criticism by those seen and unseen and the balance of expectations as wives of the Commander In Chief - it is, for now at least, fair to say that Abbey has faired better.

Scandal’s Fitz and Mellie, have a tumultuous marriage at best, and are never shown to be particularly romantic (or, in most episodes, even so much as kind) towards each other. In fact, the major “scandal” of the series is Fitz’s on-going affair with Pope and it seems to be an accepted truth that the Grant marriage was based in political strategy rather than love, though how much viewers have truly seen of their 'past' remains to be seen. And although Fitz is certainly capable of being compassionate (most frequently with Pope), he’s somewhat aggressive and even misogynistic when it comes to his wife, laying into her several times in both seasons, including this tongue-lashing from the second season premiere: “Your job is to plant gardens and decorate rooms and let them blog about your clothes. You’re ornamental, not functional. So don’t come into the Oval and try to use your brain because no one cares.”

“Mellie's only move is to find a way to make him care,” Young says in an interview with The Hollywood Reporter. “The stakes are, quite simply, losing her identity. As a wife, as a mother, as a partner, as a politician -- to no longer be Mrs. Grant is to lose life as she knows it.”

Even in the most tenuous episodes it’s hard to imagine The West Wing’s President Josiah Bartlet speaking so dismissively to his wife, who is treated not only as his partner, but also as his intellectual equal. Even when Abbey clearly oversteps her bounds in regards to pushing policy, or violating medical ethics codes (technically, to his benefit but nonetheless forcing her to voluntary surrender her medical license), or blaming him for their daughter’s politically-motivated kidnapping, there is always rift and tension but never the level of disgust and distrust that permeates Scandal’s first couple.

They also diverge in regards to their political ambitions. In Scandal’s first season, Grant makes plans to leave her husband when he admits he's apathetic about the Presidency and wants a more private, normal life. The West Wing’s Abbey is more fulfilled by her career as a medical doctor, and though she’s educated, eloquent and often involved in promoting and trying to develop policy—primarily in the area of women’s rights—the political aspects are clearly a role she would easily hand off. Where Abbey frequently expresses her frustration with the political process, as well as her belief that, due to his inevitably declining health, the President would not seek a second term, Mellie Grant seems willing to do whatever it takes, even to her own detriment, to preserve Fitz's place, and thus her own, in history.

The West Wing's second season finale ended with President Bartlet announcing, in dramatic fashion in the midst of a heavy thunderstorm, his intention to run for a second term. Though it seemed legitimately up for debate at the time, it was only the second of what would become seven seasons and had only begun to hit its stride. If we're looking to the past for a hint at Scandal's future--it's a long campaign and hell hath no fury like a first lady scorned.