How do I spend downtime at work? More work...

I used this class as an opportunity to pretend I was working on a real client project. My boyfriend helped me out and posed as the client.

My best guess at time, plus the real time I spent

Plus 1-2 hours of onboarding that generated the brief. Thanks Dylan :)

I chose to build-in time for a second draft. It's unlikely I'd get this right on the first try, and I wanted to give the color palette a solid chance for discussion just in case! The couple was up front about the fact that they hadn't settled on a color scheme yet.

Keeping that in mind, I didn't want to make anything too "themey" in case it clashed with decisions they made about their wedding later on.

The couple also mentioned not wanting "something you see 500 of on Pintrest," so I specifically budgeted time for looking at what was all over pinterest - aka research. I wanted to know what I shouldn't be making! Much of that research gave me "template" vibes, so I knew a completely custom illustration would be the way to go.

Since I had very little actual content, but a pretty wide field to work with, I did use the skeleton method as a way to help figure out the client's reactions to ideas without getting too far in.

Cost breakdown: I had to use some very round numbers for tracking my time. I knew that at least some of these hours were going to be me fussing with the software, since I'm still learning.

However, I do have formal art training. I also chose not to include printing services at this time. I had no idea where to start. Simply put, I didn't want to bite off more than I could chew!

Less than three hundred seems a little low, but five hundred is way, way too high for me! For a small piece like this, I think my final quote would be around $375.

If that number was still out of reach financially, perhaps an extremely simple design would suffice. Or, for a higher quote, I could bundle in print & prep services to save them time (and stress!) by handling the entire project all together. A big thing that drives my artwork, personally, is accessibility. I want people to be able to afford art!

A few notes on the design itself:

The front does not say 'save the date' because I also drafted the back of the card. I intended it to be sent as a postcard "from" their wedding destination, eliminating the need for envelopes.

The three notes he gave on the final draft were:

1) plant silhouettes didn't make sense to him.
2) didn't like that the light blue wave was in 2 pieces.
3) was interested in putting text on multiple stripes in the sky.

I adjusted those things, and I think I ended up with a pretty strong design. Still not 100% pleased with the text placement, but it's something that I want to print a proof for and see what it looks like in real life - eventually :) 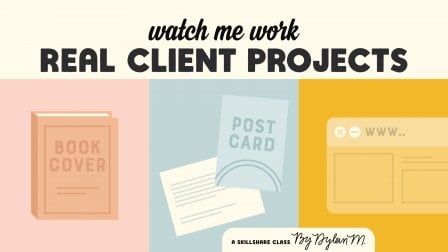