Using the sketch provided, I’ve created a couple different images of the same character. My goal was to practice various textures in a fun way.

I focused on creating the impression that my lines were soft and light – I used light strokes with wispy ends to achieve this. For the hair on the head, I drew it in chunks, which minimized how many lines were drawn. This ensured the finished product wasn’t messy looking.

I also tried blocking out the hair. I created a solid mass using black and went back in with white lines to define the shape.

For both the beard and stubble, I used the same kind of light lines but made sure they followed the contours of the face.

First thing I did was draw in the nose, lips and eyes. From there I marked, in blue, the contours of the  face. This would help me in my next step, creating scars, freckles and scales.

To draw the scars and freckles I kept the same idea in mind – make sure that these subtle textures conform to the shapes underneath. Since skin wraps around the forms beneath it, anything on the skin needs to do the same.

The scales were a bit more tough, I had to remember that they not only need to wrap around the forms, but that they also overlap themselves.

As always, I start with basic outlines and blacking out shapes. I want a denim look for the centre piece and leather for the arms. His shirt is a light material – maybe a cotton or linen, which means that it’ll be flowy in comparison to the crisp, heavy jacket.

Since I have both a denim coat and a leather coat at home, I had a better sense of what these materials look and behave like. This affects the way I draw and add details. For the denim, I added stitching and seams all over the coat. The material, since it’s so thick, seems to buckle in places where there are buttons or reinforced pockets. I drew in little lines to symbolize the buckling.

There were a few empty spots on his coat, so I added in some tears and patches. I also practiced placing an image on the front of this shirt.

Here are a few of the different versions I created of the same character. 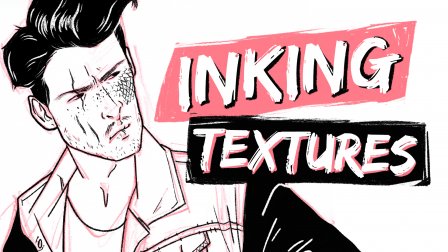