Also, it should be noted that I'm backing into this a little bit and I'm using a project that wasn't developed specifically for this course but something I created for a client and have used in the videos as a case study for this course.

From each of the movies I created a list of scenes that I wanted to highlight in each poster, here's the one for the Voyage of the Dawn Treader:

I also created these rough layouts showing that each poster would have a slightly different structure:

I've also created a Pinterest board of some colors that inspired me while thinking about the colors for this project. Here's a snippet:

Originally I thought that I would use a green for the first poster so the emotions would look something like this:

The Lion, The Witch and the Wardrobe - Hope

Voyage of the Dawn Treader - Excitement

I hit the ground running and did a couple of VERY loose sketches for the first poster:

I started working through the first poster, with the green color. Here's what it looked like early on:

If you want to see more of me drawing it, you can watch this vimeo process video:

By the time it was done I wasn't very happy with how the colors were coming together. There was way too much contrast in the hues, especially with me using some pretty saturated colors to begin with. They were just clashing way too much. I decided to move away from the idea for a green and choose something different instead.

I tried lots of different things, brown, yellow, red, orange even but nothing was working. There was still simply TOO MUCH color. In the end I used a neutral gray to allow the blue, white and purple to really pop off of the page. It also allowed me to shift the emotion of the first poster to something that would work better anyway.

The content I chose for the first poster wasn't working with the emotion I was trying to convey. Everything was about the points in the movie where things were really cold and hopeless, even with the trimphant image on the top it wasn't enough. Switching to a gray worked better both as a design choice and a contextual choice. In the end the emotions look more like:

The Lion, The Witch and the Wardrobe - Despair

Voyage of the Dawn Treader - Excitement

Here's the final poster before adding some final revisions and more detail too it:

****Don't be afraid to continue to evaluate and edit your color choices as you work through the project.

For this one I didn't end up expanding the color palette at all because I knew I wanted to use the same colors and since these are intended for screenprinting I needed to limit the number of colors used overall.

I knew I wanted the second one to be primarily purple and the last one to be primarily blue. To help shift the emotions in these too to have a more positive tone I added more contrast and more of the saturated colors instead of the large amounts of bleak gray and white in the first one. Here's the finished second one:

For the third one to add even a bit more excitement too it I added more contrast in the background colors by varying them more often and lots of variation of the purple and blue colors to really create some excitement in the color:

You can see that overall I added a little bit more textural detail with the halftone screens as well as more detail overall to each of the posters. Right up to the end I continued to tweak the colors, moving the blue green closer to a teal blue, making it more of an analogous color to the purple. This decreased the contrast in the hues since they were closer on the color wheel, allowing me to increase the contrast in the brightness and saturation of the colors, which you can see in the final product:

Let me know if you have any questions about the structure of your projects or what all you should be posting, hopefully this provides a decent reference. 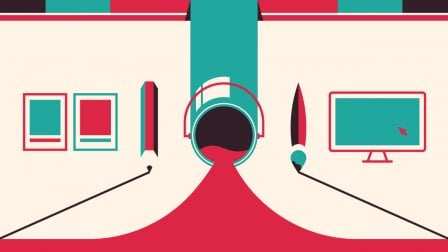