So I was originally going to try to add some grain texture to the Caliconut drawing that I completed in the "Give the pen tool a day off" course but as I started working with it, the thick stroke and grain were not complementing each other as much as I wanted them to. I decided to drop trying to add texture to that image and work on a drawing of Russel from Disney Pixar's movie "Up" that I had done for Mof1's Epcot Challenge.

Here is what the grain texture on the Caliconut looked like before I dropped it:

Obviously it still needed some work but I stopped when I decided the more texture I added the less I liked it. Although the texture did not work out I do not consider it time wasted.

While I was playing with the grain texture on this drawing I was struggling with the lack of control that the blending modes give you over the color range of the grain texture (I should also add that I was working in CMYK and I was frustrated that the blending modes weren't working like they were in the videos). I found that the solution for me was to duplicate the shape as demonstrated in the video, change the fill color of the shape to whatever I wanted the grain texture to be, and then add a mask to the image where I created black and white gradient shape and applied the gran texture. This method was a little more tedious than the one in the video but I was able to achieve much more intense highlights (even on lighter base colors) and add cool color effects to the shadows:

I took this knowledge and applied it to my next effort which I think turned out a lot better! Apologies for the wrinkled sketch, my evil Weiner Dog decided to take a nap on it. 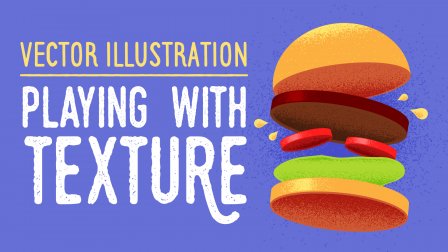