Rocket Coloring based on Warhol

The original uncolored illustration came from Getty images. In order to color it, I took these steps: First, I searched Pinterest for an image from which to create a color palette. I chose Andy Warhol's Moonwalk poster. Next, I opened the Moonwalk image in Photoshop and applied the Filter - Pixelate - Mosaic. From the large pixels, I made a color palette in RGB mode and labeled each swatch in hexagonal format. Then I converted the file to CMYK mode, noticing the difference in the color gamut, and labeled the converted five swatches with CMYK labels. Then I tried the alternate (more fun) method of creating a swatch palette and imported the original Andy Warhol image to https://color.adobe.com. I moved the color selectors around until I got approximately the same five swatches that I had chosen in Photoshop. Next, I created and downloaded the .ase file. Next, I opened the vector illustration in Illustrator, cleaned out the existing color swatches, and loaded my WarholAstronaut.ase file. Using the five colors in the palette, plus black for the background, I colored vector image the image show. 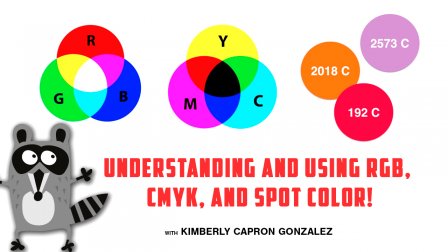