My examples are of both good and bad user experience. Robinhood and Webull are both applications that are made to help the user track, invest and trade stocks / cryptocurrency. I chose these two because of the drastic difference in usability even though they are made for the same purpose and display similar content.

Robinhood follows the second good UX rule of clarity and simplicity while Webull attempts to include any possible option at any given time. Webull overwhelms the user to the point of frustration and expects them to learn the locations and functions of the app. On the other hand Robinhood has an ease of use with a clean and clear interface. Robinhood displays the same information, but the layout allows for the content to be digested.

As an example, here is a screen from the Robinhood app displaying the information for Blackberry. The user can immediately see the most important information, followed by the price movement, then the charts. The cart displays specific prices only when the user engages it. The screen continues to provide further detail as the user scrolls based on importance. The CTA to trade remains pinned to the bottom of the screen and the spacing with recognizable icons makes it easy to navigate.

The Webull interface is noticeably different. Here we can see that the visual hierarchy was not considered there is a lot of information on the screen at once. This gives perspective on how much information was hidden and deemed not immediately important by Robinhood's team. All the information that is shown in Webull is included in Robinhood. The ability to quickly find and digest information is hindered by the massive amount of content on the screen.

Not shown on this screen, but sometimes Webull even clutters the screen with ads for their promotions. The button to close the ad is extremely small to top it off.

The two applications are made to perform the exact same task, but one results in delight and the other in frustration. From personal experience, I started using Robinhood, was unhappy with some of their business practices and switched to Webull. I ended up so frustrated with Webull that I went back to using Robinhood and realized how well they had created their UX. 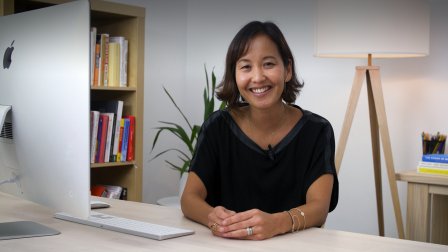 Intro to UX: Designing with a User-Centered Approach
Cinthya Mohr