Results not exactly as demonstrated in the class :D

Sooo, I know that my renditions do not look much of anything like the lovely projects in the video or in the student projects area, but I'm going to be brave and submit anyway.

I've been working on these while in the midst of the record-breaking heat wave in western Canada and the watercolours were drying almost before I could get them onto the paper. It meant using a lot more water which made it challenging to get the lovely delineations and white spaces between segments etc.

As a new user to watercolours, it was unnerving but I finally decided to just relax and play with the techniques, letting the end results be what they were going to be. I know I still have so much to learn about composition and colours, and even though the paintings are not what the projects were intended to be I learned a lot from the class, which allowed me to feel brave enough to try and adapt to what the crazy hot temperatures were doing to the paints!

This is a fifth whimsical floral piece that was so much fun to create and was influenced by what I've been learning in this class around using colours in ways I might not normally think about. The other big take away for me was being more relaxed and willing to experiment - not needing things to look "real life" and incorporating objects in different ways. For example, if I was to do this one again, I would think about using the infinity symbol as the body of the butterfly rather than as a separate piece of imagery in the painting. 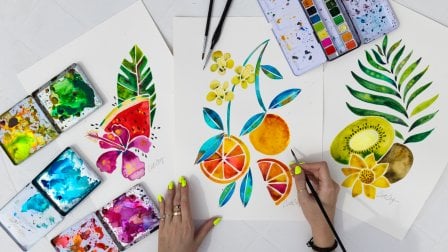