I'm not very good at these description things, but basically I made this sculpture about 5 years ago before I knew anything about sculpting:

I'm hoping to remake it using what I have learned from the book Creature Sculpt and this class!

There are numbers on the wing sections because I obsesively number EVERYTHING. Here's a couple of other views: I'm aiming for a sort of "Stopped midflight because he's just noticed you" kind of feel to it.

Next up is to tweak the armature (remove unnecessary overlapping mesh etc) and apoxie the tail for strength!

Next stage! Blocking out the sculpture: This is the first time I have ever properly blocked out a sculpture first, I rarely add clay for a basic form, I tend to sculpt in detail as I go, adding detail here and there until it's done, and never in even proportions, for instance if I may start on a leg, do the whole thing and then be bored of legs so I'll do a bit of the face, then an arm, maybe the other leg. you get the idea. But I can see how great it is blocking it all out at once, you get a better feel for the thing and it's easier to see where everything goes (I may even get the legs the same size for once!) I forgot to update so this next stage is quite a jump from the last one! As you can see he has more muscle definition, the ribs are slightly overdone at the moment, his chest scales will cover up a fair part of those anyway, wings and feet still need more work, only one side of the wings done so far. The tail still needs more work, I had it tapered nicely, then I did a lot of moving the piece around and even repositioned the wire anchoring it into the base so he stands more upright, so the tail got a little smooshed. I also gave him somewhat of a face, it's really brought him to life :D I want to keep him looking kind of friendly.

Also I just realised I should put up a few more photos of the sculpture he's being remade from, comparison shots and the like. I'll get on that!

Things to do next: Defining, refining, smoothing, tapering, and so much more!!

I'm glad this class has no deadlines to meet! Been busy, been away, etc. I've been slowly adding little details and stuff every now and again and I just noticed the difference between the last photos and how it looks now! He has a lot more muscle definition, some parts have had extra smoothing out, the wings are all clayed over, I've also altered the wing membranes a little to make them more natural, but there's still plenty to do! He looks skinny from this angle now but that's because his body is obscured by the wings joining the body. I can't seem to get his feet right at the moment, they seem to end up too big or too small, I have an idea of what to try next though. His cute face is no more!! But I'm getting there! Things to do next: A whole load of smoothing out on most of the sculpture, fix/change the feet, smooth wings and add wing detail, reposition juuuuust slightly more upright. I do have a question for Emily though, what do I do with the back of the wings? I'm planning to do them how you do dragon wings in Creature Sculpt, with the stretched skin effect, but that only shows the front of the wing. The way I see it in my head the back would have to stretch in the same places as the front, but inward, if that makes sense...?

OK that's all for now! The wings are probably the biggest change, I'm not sure if I've gone a little overboard with them though! Added seperately baked claws to the wings and feet, moothed out more lumps and bumps, The back of the wings still needs work, here's a picture of them and a close up: As you can see they have been over scraped in places until the wire mesh beneath is showing through, that will need fixing, same goes for the front. I think I may have overdone these fold-wise, they look a little unnatural. Plus there are loads of scrape marks that need smoothing out! He must be doing sit ups or something because those abs are getting BIG!! :D

His "arms" need work too, they're a bit misproportioned.

But that's it for this update, still plenty to do, keep up the good work everyone! Here's what's new! Ears have been remade, they're now bigger, thicker, more bat-like, and fit to the head in a much more natural way. I also added a few scales and some back spikes. And added what I'm calling a "swoosh" cuz I dunno what else you would call it :D Plus the usual adding, removing, thinning out and thickening up different parts. I think I may be just about ready to put him in the oven and move on to painting prep. Eep!

Just a quick update, no pictures this time.

I put him in the oven, hooray! However, much to my horror I discovered I had made him too tall for my tiny little oven, so he had to be cooked on his back, I'll have to keep that in mind next time, it squished two back spikes and altered a wing shape slightly, but I should be able to epoxie those things later. I managed to do the dreaded painting and I didn't ruin it! My confidence in painting gets a +1!

The pictures don't quite show the contrast between the blue and the gray but that's ok. My finishing spray gave a slight shine, more than it usually does, I think I may have sprayed a second coat too soon, but it made the skin more natural looking so that was a bonus :D Some of the details up close. I will definitely do more sanding next time. I'm happy with how the swoosh turned out too, I'll try to add more effects in future, they really seem to bring sculpts to life. The back of the wings turned out well too, they were bugging me somewhat, but I have learned from it and know what I will do differently next time, yay!

I'm so happy this turned out so well, this class has been amazing and I will definitely continue to use it as an invaluable resource. I've already started on several new projects, and I enjoy them more and more with each one! Thanks again and again Emily!!! 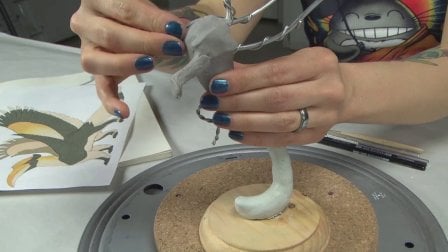