Apologies for the dreadful photos - I'm travelling in my camper van while doing this so light isn't the best!

I only used my cheap paper for these projects (Hahnemuhle block, 200gsm) which I really don't like so reserving it for practice pieces. Despite it being a block, the paper still ends up wavy and also the masking fluid ended up ripping the paper.

All were painted with St Petersburg watercolours. I also used a Posca white pen for some instead of masking fluid, which quite often doesn't give me a nice clean white - more like a semi transparent white unless I push hard and then quite often end up with a big blob!

I struggle a bit with glazing - I'm not very confident in putting on a strong colour so end up having to glaze too many times which I think doesn't look as fresh - something for me to work on.

I've uploaded only the practice pieces from the workshop and my Project piece, although still working on the scone.

Looking forward to the other classes :) I'll definitely be applying the techniques learned here to my sketchbook work. 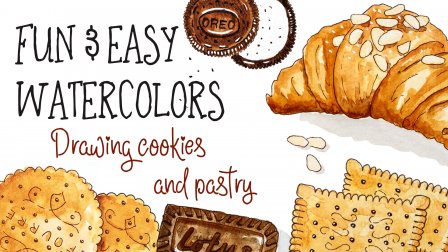