One of the places I can try to describe to you is Puerto Rico's Carolina district. In this district you can find many interesting souvenir  shops and fast food restaurants as well as hotels that are right on the beach. Let's start with the airport. When the plane touched down at sunny Puerto Rico's airport we hurried to find the carousel that our bags were coming through. We (my family) took  the escalator down to the main lobby floor and waited for our bags to arrive. About  fifteen minutes later the bags started to appear. When ours appeared we grabbed them and placed them on a carriage and proceeded to the front door to locate a taxi to take us to the ESJ azul Towers hotel. After waiting about twenty minutes outside  in the tremendously hot air an air conditioned van taxi showed up and we instructed the driver to take us to the ESJ azul  Towers hotel.Leaving the airport we passed a lot of open fields and highways. We then turned off the highway and into the main road to the hotel. On the left hand side we passed the main grocery store in Carolina, called Pueblo. A store that is open twenty four hours a day for the locals and tourists to shop. It also gave you a picture perfect view of the planes coming in to land at the airport. Also next to the shop was another hotel with its own indoor parking  area on six levels. A little further down the street was a Chilli's Restaurant and a place where the locals held cock fights between chickens.

On the right hand side of the main street there was a Hyatt hotel tucked neatly inside a compound behind a row of tall world flags. Moving further right we also saw a Walgreens pharmacy and several other stores split on a two level building. Meaning that to reach the pharmacy you would have to climb the stairs to the second level. There was also a record store and a costume store on the same level. But most people only went to the pharmacy. Continuing on we passed a diner  which served breakfast, lunch and dinner as well as desserts like ice cream and sundaes at very reasonable prices. There was also a diner called Platos which served lunch and dinner to there customers. Their specialty was Esplandes with fries or with rice and a drink. The one thing I really liked about Puerto Rico was the fact that there was always loud music playing every where you looked by the locals and the people themselves were very  friendly and open to tourists. A few steps down the street we passed a Chinese takeout restaurant that had just moved into Carolina and already had a pretty good crowd inside.  Along the same side as this restaurant there were two other new restaurants that just opened up and they had their workers standing outside  of the diner handing out menus  to people passing by. Close to the entrance of ESJ there was a restaurant called Pepe's which served real Spanish cuisine such as Fehita's and other local meals. This restaurant was an open air diner with a sidewalk terrace where people could pass by very close to the people eating their dinner.

When we finally arrived at ESJ azul we signed in at the front desk in the lobby and received our keys to our room on the tenth floor. I also noticed that there were a few people walking from the lunch cafe through the long lobby of the hotel admiring the many changes that were made throughout the hotel over the years. One of the noticeable changes was that now the guests could now access the beach directly without using the basement door. Now people could come and go from the beach as they want all day long. As they go from the beach to the pool depending on the heat of the day. Another change that was made in the hotel was that the staff had moved their bar out in the open for the people to have free access to day and night. They also moved their little market from the end of the hall to the middle of the lobby and made it an open market for all. The biggest change was that they painted their interior lobby in a bright color of white and blue. This I think increased the light inside the lobby during the day. Walking towards the rear entrance of the hotel we waited for our lift  to take us to our room. We then took the elevator  upstairs to our room on the tenth floor. Which over looked the beach and the pool area as well as all the other hotels that lined the beach.The room itself was a studio with one bedroom, a king size bed and a huge closet, bureau and its own television. Outside the room in the main room there was also a washing machine and dryer combo tucked neatly into a closet that was next to the bathroom.The main room came with a pullout sofa bed a televison, and a six drawer bureau for clothes . As well as a dinner table and a small kitchnette equipped with the necessary utensils for preparing food and a phone for the front desk. After storing our bags and sorting out our clothes for the week in our room we decided to go down to the lobby and out the front door and walk out into the arid heavy tropical air to the entrance of ESJ. Which was watched by a security guard twenty four hours a day. We decided to continue on the right hand side of the street which was shaded and walk towards a small grocery and fast food  store for a quick take out  meal and a few necessities we would need for at least the night and the  morning. Walking down Carolina Boulevard we could see the hotels from the front such as ESJ Hotel and Casino which was  connected to our hotel by a walkway and the Intercontinental Hotel  Along with this one there was also the Beach and Surf Towers hotel that also had access to the beach along  with a number  of others that were stretched along the beach. On the other side of the street there were condos and apartment buildings that some of the locals lived in. Each one had their own underground parking area.

Continuing on we also passed by a small car rental store and a few souvenir shops for those looking to pick up a gift for someone back home. We then stepped into a little grocery and bought items that we needed to get us through the night and morning.The rest we would get from the main store Pueblo. Leaving the grocery we went stepped  into a cool conditioned Wendy's fast food restaurant and each of us ordered something different like an ice cream frosty and combos to go. Close by There was a KFC, a Ponderossa, Taco bell, and a Long John Silver restaurant nearby as well as a Pizza Hut and another small Chinese takeout place all within a few meters of each other. I guessed the thing is you could from one fast food place to another and never be hungry all day. After gathering our goods we turned  and walked back to the hotel which was only about fifteen minutes away. Content in the thought that we  had enough to sustain us for the night  and morning and probably the next day we decided to skip the main store and head straight to the hotel. Returning to the hotel we passed the taxi stand where the drivers were sitting outside playing cards and dominoes to pass the time. As we entered the long drive way to the hotel we passed a number of people  dressed up and heading out to see what Carolina had to offer them in terms of night life and gambling. Returning to the hotel and entering the lobby we saw a few people milling around the bar  having drinks and sharing stories in Spanish. Walking to the elevator at the back of the lobby we waited for the lift. When it came we pushed the number for our floor as the car rose up. When it arrived to the tenth floor we existed the lift and entered our room. We then opened the door and placed our bags on the floor and just just relaxed in the sofa and side chairs for a few minutes. A little  later I went and opened the balcony door and  sat outside in one of the chairs to enjoy the cool night air and watch a few people still walking on the beach and the last of the guests leaving the pool area before it closed for the night. Also to gaze a while at the lights of the other hotels that lined the beach area and at the distant lights of Condado flickering on and off in the distance. Also to know that I had safely made it to Puerto Rico as I watched the lights of distant planes in the sky arrive at Carolina one after another.   This was my view of my first day in  Puerto Rico for you. 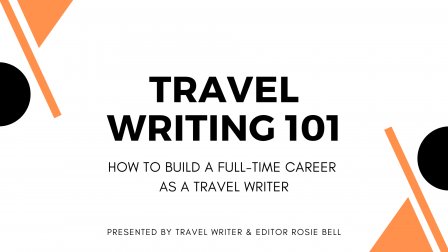 Travel Writing 101: How To Build A Full-Time Career as a Travel Writer
Rosie Bell