I happent to have been commissioned to do a digital portrait painting. I'd like to use what I learn on this class as I progress and see how it turns out.

For reference on my current skillset, feel free to refer to my deviantart page: artofrivana.deviantart.com

I have a commission to create a portrait and this is the reference I used. I actually already made a rough sketch before this but the next thing I want to do is play with the composition a bit.

So this is what I want to go with:

Updated the reference based on the composition I want to go with from my previous post.

Really loving the posterize tip. Here's the updated sketch based on the values tutorial. I removed the accessories for now since I will add them later on. I also decided to change the background a little bit to look more of a V-shaped lighting because I did not quite like what it looks like in the posterized version.

Did the guide line stuff. I think it helps even though not exact yet. But I am not planning to take the exact likeness as the character actually looks quite different.

Now I am starting to take the character into mind and getting into the details.

She doesnt have eyebrows and is actually a warrior type so I tried to make her look less skinny:

Here's after I added all the character specific details and polished it a bit more. I have to admit, I am not so good at accessories.I also applied some of the finishing touches that were suggested in the tutorial. The tattoo is a stock photo and not drawn.

The artwork is still not done though as I have to color it but thanks to this class it looks better than I have ever imagined. It's not perfect and I will probably do more adjustments

Here's the colored version that I did. I applied the same concepts that Gabrielle mentioned in the edges and finishing touches part.

Update: Another work done using the same pointers in this class: 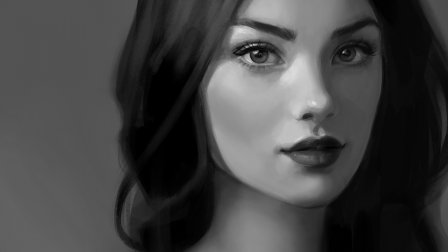