Update X: Class is over, but I might as well finish this project.

I didn't get this done in time, and I'm still not sure I like it, but it's important that I finish what I start. So here's my final copy of the rock poster for Porter Robinson. 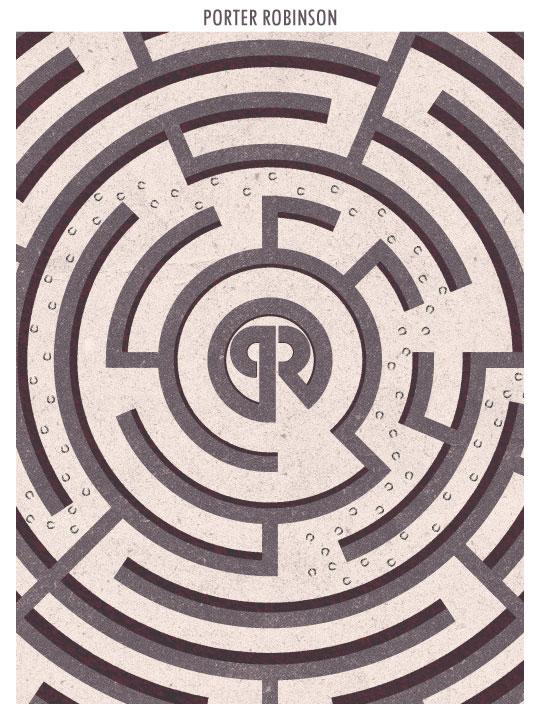 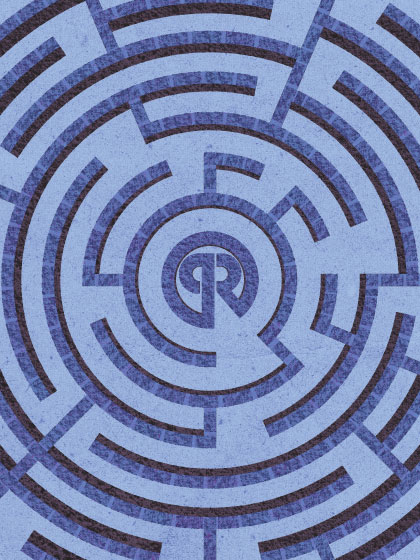 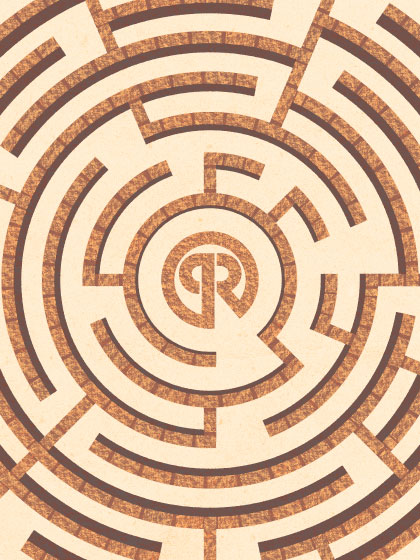 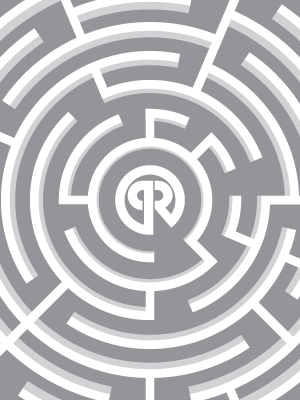 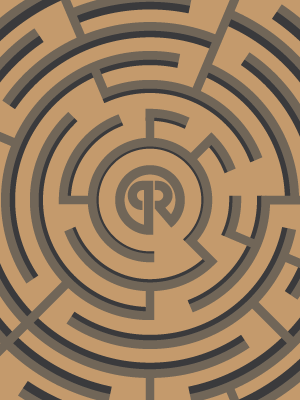 Update 6: Reworking of the labyrinth idea, still trying to decide on colors and textures 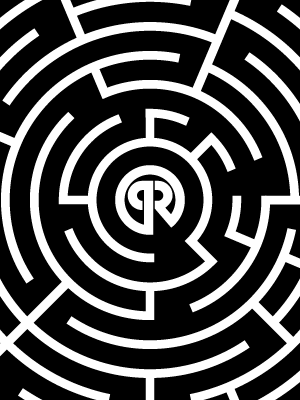 Unsatisfied with my pervious concepts, I decided to try something totally new. I've decided to leave any ideas about Chapel Hill or anarchy off the table for now, since it doesn't come through visually in Porter's existing styles. Since Porter always uses his logo, I started from there and thought about how I could build a simple geometric pattern around it. The concept became obvious, and I mocked it up in Illustrator.

The new poster concept: a labyrinth. 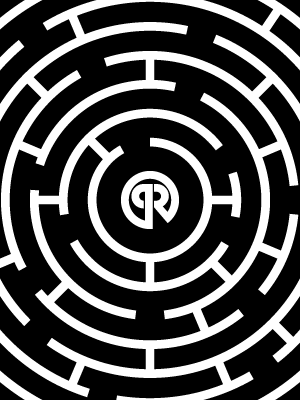 I spent most of the past weekend busting my ass at a conference, and I haven't progressed much on my sketches. I'm already past due for the second round of sketches. My designs aren't near final. And in truth, I don't really like them.

I've seen a log of great sketches and posters taking shape in this course, and I've got two main observationed:

Maybe I chose my artist poorly, since his existing style conflicts so strongly with anything DKNG has done. To take full advantage of this course, I would have to ignore the previous art style used by Porter Robinson. But then I'd fail to be "compromising with the artist", which is an important lesson to take away from the class. Quite the dilemma.

Maybe I can find another compromise between Porter's styles, DKNG's styles, and my own. But right now, I'm not very confident in what I'm producing for this class or my ability to make something good.

So I'll just remind myself of the most useful phrase I ever heard from a cartoon character: 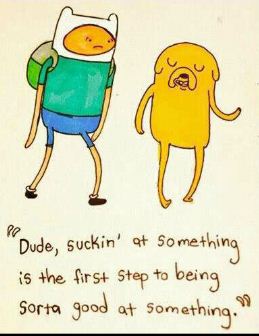 I've made Illustrator mockups of sketches 2 and 5, using different shades of gray to show where either shifts or changes in the main image would be. 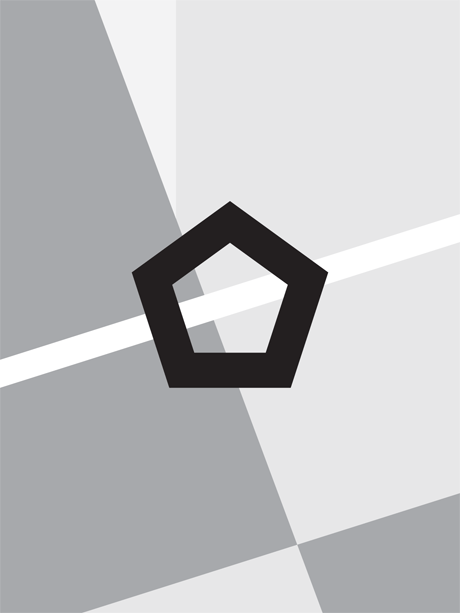 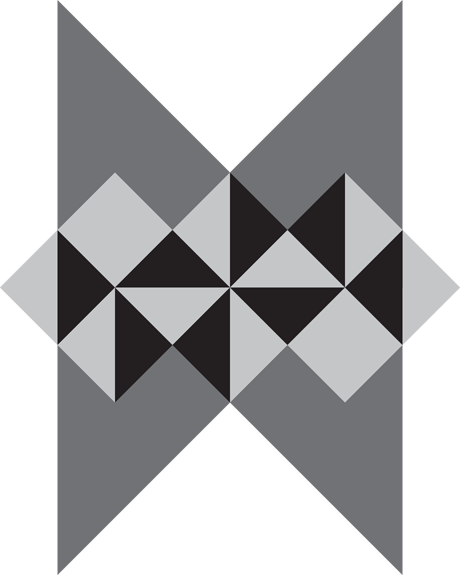 I haven't had time to create Illustrator examples like I did for my first sketch, but here are 4 other quick sketches that lay out of geometry I've thought about. In all of these sketches, I expect each shape to show either a shifted version of a source image or a piece of a different image entirely. 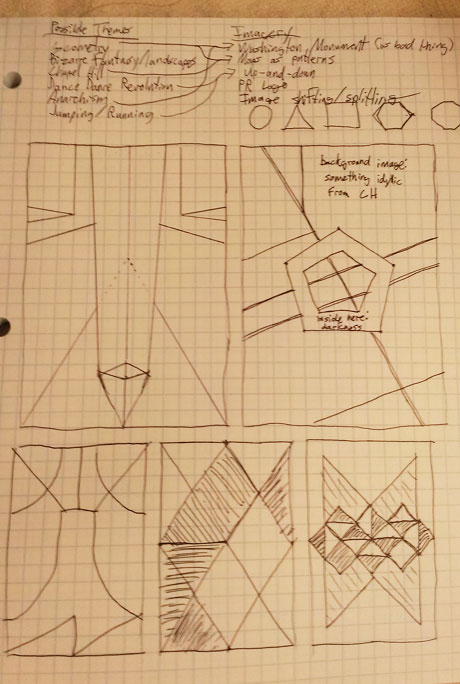 These sketches, admittedly, could use some fleshing out. But it's a start. Each one is abstractly inspired by something from my research. I already mentions how #1 (top left) is inspired by an inverted Washington Monument, alluding to Porter's anarchism. #2 (top right) is inspired by a simplified map of Chapel Hill, NC (featuring Rosemary and Franklin Street running left-to-right through the center, and Columbia running top-to-bottom) with a Pentagon shape knocking out part of the center. The highway-inspired lines would be divisions along an image that will but cut and shifted. The Pentagon would be a dark color or some other dark image, leaving a bit of a dark mark on the otherwise lighter poster. 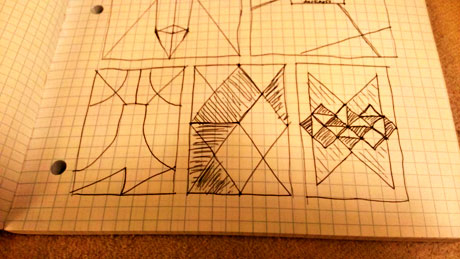 The three along the bottom here would also cut and shift elements of a main image, or contrast two separate images along the drawn lines. The inspirations for these sketches, from left to right, are 1) a map of DC exaggerated into a monster's face, 2) an argyle pattern, which would be a common style among the snootier classes of Chapel Hill, NC, and 3) arrows from Dance Dance Revolution and a bow tie (which would've been commonly worn by anarchist Murray Rothbard).

I don't know yet which sketch I want to move forward with. I need to start looking at images I could use and the colors I would incorporate. Since each sketch is based on simple shapes, I could experiment with each in Photoshop/Illustrator before making a final choice.

I've been brainstorming ways to integrate my observations of Porter's life, personality, politics and existing art style into a gig poster. It's been a tough syntehsis, since a lot of it seems unrelated. I shouldn't try to force anything together, but I've also got to get this done on time. (Doesn't help that I've got a real job, too!) 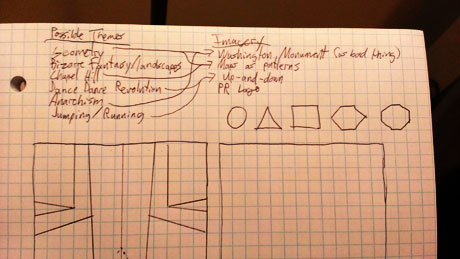 One constand in the art is the use of geometry to divide imagery, often one single image. So geometry is my starting point. I've been working on one concept sketch that takes as inspiration an inverted Washington Monument (Porter's an anarchist) for the main geometric shape. I've built other shapes around that. 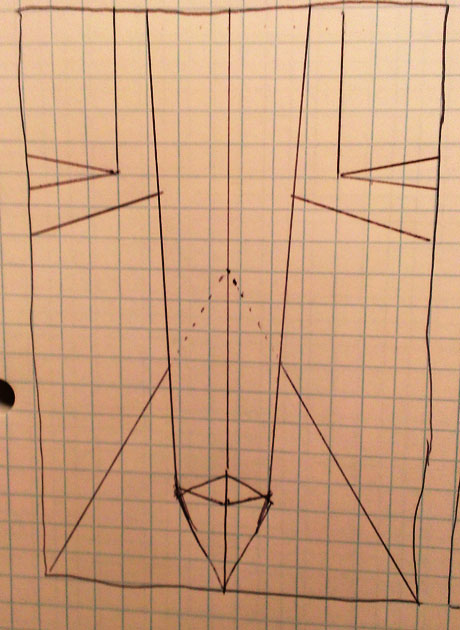 I've expanded on this idea in Illustrator with some thoughts on the relative shading of each bit of geometry, and some other shape elements. This is my first sketch, and I'll be adding more before the night is through. 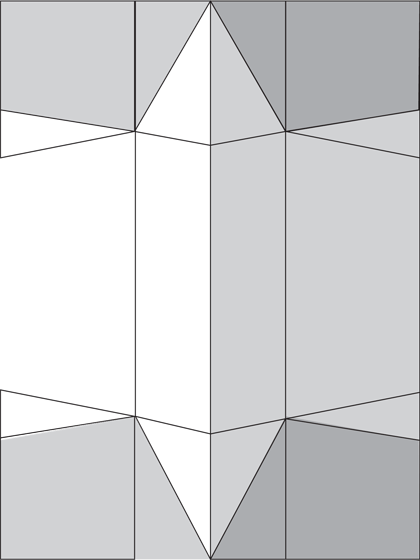 I've spent the day listening to Porter Robinson songs and watching what videos I could find. This video for his song Lanuage showcases some of the stylistic elements I keep seeing in the posters, combining sort of natural/fantasy elements with geometric shapes and colors.

I also watched a mini-documentary about a college tour Porter did and got a sense of his person, his behavior while playing, and his performance style. Lots of jumping, lots of people screaming "PORTER!", and a lot of his logo/wordmark appearing behind him on stage (and on stickers placed inside fans' cleavage). He uses that a lot--virtually every bit of artwork I've seen features it. I'll probably have to include the logo in my piece too, as he'd probably insist on it if this were a real gig poster I'd been hired to do.

The sense of character I got from watching the documentary should help a lot. He's living a life very outside of what I'd consider a normal experience for a resident of Chapel Hill, NC. A man could happily waste away his days in that small college town, but the documentary showed not a bit of that place. Porter doesn't seem like he'd really belong there, and it limits how much I can use my own knowledge of the town in my artwork.

Other than the obvious inspiration from Porter's existing art, I wanted to showcase some other images I found on Designspiration that hopefully shed more light on the style I'm aiming for.

There are a few reasons I'm choosing Porter Robinson.

The graphic style used in Porter Robinson's posters and album covers to date is different from style I typically use, so it will also be a fun challenge to try something new. 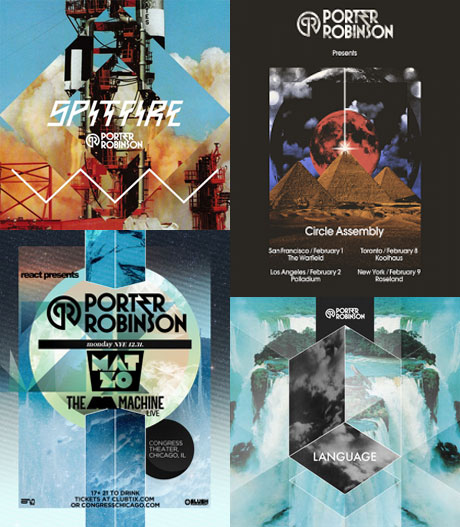 It's got a bit of a techno-retro feel with heavy used of geometry. Many things I design are oftern minimalistic or heavy with illustration, but very rarely do I get to create surreal worlds in Photoshop. I'm going to have a lot of fun coming up with concepts for a gig poster that fits this style!