When I saw the words “vintage-inspired” and “mixed media” in the class title, I wasn’t expecting such a detailed and realistic approach.  I almost skipped over the class, but I thought I would give it a go.  Part of the reason that I think I shy away from this approach is the time factor.  I want to sit down and have something painted very quickly, and this style doesn’t exactly allow for that.  Or so I thought.

I started off with a dahlia, but I didn’t feel like hunting down a reference and trying to sketch it out first.  So I made up my own version.  Then I started with the light layers and gradually built up the flower and the leaves.  When I was done, this was the result:

I think I would have been happier to leave it like this, but I felt like I needed to try the mixed media part.  So I broke out the watercolor pencils.  And I finally looked up some references for dahlias.  My thought was to try to push some of the darks and lights, but to me it ended up kind of muddy:

In the middle of working on the dahlia, I wanted to do some red poppies for Memorial Day.  This time I grabbed some reference photos first and sketched out some buds and flowers facing different directions.  There was a rather short window of time to work on them, but I still tried to work in layers, slowly building up the details.  I was much happier with how the poppies turned out.  Not hyper realistic, but I feel it mirrors more of my own style when it comes to painting flowers.  There were some dry brush effects that happened by accident and the darker red on the bottom flower scared me a little when I first put it down.  But I really like how it turned out. 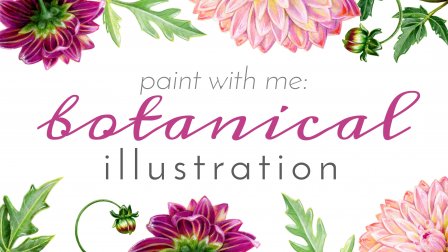