To develop the skill of creating geometric animals from sketch to full vector in Adobe Illustrator, I chose to illustrate a polar bear.

Polar bears have a range that stretches far along the coasts of the Chukchi and Beaufort seas.

I wanted to pay specific homage to the indigenous people living in those regions as well, so I spent time researching traditional Inuit tattoos and discovered a rich history of women tattooing women to mark specific events or to indicate heritage and location.

The markings on my polar bear illustration incorporate traditional Inuit symbols for mountains and oceans (the zig-zag pattern and the lines of dots), transitioning into adulthood (the double-line crown), where the polar bears live (the lines at the chin and the crosses on either side of the mouth represent the area near the Beaufort Sea), and what they eat (the Y-shapes and diamond shapes on lines represent seal-hunting tools and the "stitching" pattern in the outer circles represent caribou sinew). I didn't want to blindly co-opt the symbols without considering what they mean to the people they represent.

For more information, you can visit the following links:

- https://twitter.com/sarah0rogers/status/689493166915846144 (this is where I found location indicator information for facial tattoos on Inuit women)

My initial sketch is rough and wobbly, but it served well as a research collection and a basic idea of what I wanted to incorporate.

The first represents the traditional colors of the Arctic, the ice, the water, the white (though it is sometimes yellowish) of the bears' fur.

The second represents traditional femininity mixed with the strength of the bear. It also blends the royalty of these bears (the largest bears on earth) with the strong and beautiful traditions held by Inuit women.

The third represents the blood of the animals needed for the polar bears to survive, as well as the fate of the bears if they continue to lose their hunting grounds and suffer from a diminished habitat due to climate change.

The fourth represents a psychedelic triad that plays on traditional color theory (combining the primary colors for a touch of playfulness) as well as referencing the festivals and the protest songs that many Native Americans are still writing and performing to this day.

I also wanted to experiment with the "optional textures" that the workshop providers suggested.

I had a lot of fun developing these pieces and practicing my Adobe Illustrator skills. Many thanks to the workshop providers - DKNG Studios! 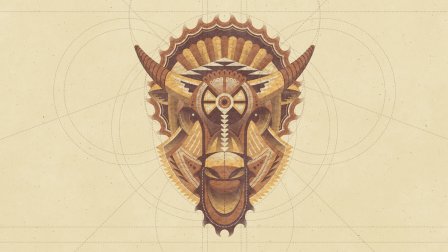 Illustration for Designers: Create Your Own Geometric Animal
DKNG Studios