Played around some more with these: I experimented with using a mid-tone (gray) and then a black background for the arrangements, so see how that would affect results.

#1: With this first one, I selected all mid-tones from my color choices. I expected the result to be very bland. Surprisingly, the contrast between the mid-tones (green and red) and colors that were only slightly different in tone (orange and grey) made for a pretty interesting result. The red and green look pretty much the same as each other, as do the orange and gray. The purple and red are the same tone, and so the tree disappears into the mid-range bushes in this arrangement. In other words, what starts out as a 5-color arrangement (gray, purple, orange, red green) ends up, in the B&W version, as basically two: gray and darker gray--kind of a waste of color? But not a bad design (except for the disappearing treetops).

With this next one, I added the extremes of light-toned yellow and dark-toned-blue to my mid-toned background plan. I could see that a sunset-type landscape might feature a bright middle area like this. What doesn't work is the dark blue--it really jumps out in the B&W version. The colors don't make sense to me for some reason, either, so I made a slight change in my third attempt.

Same thing, but with blue tree-trunks. What a difference this small change made! By adding another bit of the dark blue, suddenly there is more balance in the B&W version. The color version, too, is improved, as the confusing bit of red is removed... an argument for limited palette designs, perhaps?

For these, I used a black background as my base. I used the same color scheme as for #3, but substituted a black background, to see what importance the background serves. I still rather like this one, but there is perhaps too much contrast between the lightest valued yellow and the darkest value black--I prefer the effect of #3, in both the color and the B&W versions.

For this one, I used less of the big contrasting yellow, limiting it to the trees and a balancing horizontal strip. I selected the darkest color I have, the blue, to see how that would look. I think the dark blue almost disappears in the B&W version, but I can see that that might be ok for some subjects?

For this last one, I left everything the same except the foreground. I used a mid-tone green instead of the dark blue. Bizarrely, the orange and green ended up looking the same in the B&W! This is odd, because the same combination of orange and green in #1, where I used a mid-tone background, did not look the same. This is very startling. I wonder if it's the lighting or something?? I am not happy with this one--there is too much sameness with all the mid-tones together in the center. The only interest in this one is the pattern of the yellow, forming a right angle of contrast against the mid-tones and black (if that makes sense).

Created six pairs of settings of the landscape. I made a note of what value each color appeared to be and found that referring back to that was very helpful in understanding my results.  I'll put in comments for each pair. (I will add each pair individually, to make sure I don't lose my changes as I'm having trouble getting things to upload correctly.)

In this version I only made a slight change--I swapped one of the orange trees for a green one. The green is quite noticeable in the color version, but in the black and white version, it disappears against the purple background because the two colors are the same value.

#3. In this pairing I just switched the middle panel from purple to red. Again, this is very noticeable in the color version but you can't tell they are different at all in the black and white version.

#4. In this version, I thought I'd see what would happen if I used colors all around the same value for the mid-tones. Not surprisingly, the result is very bland in the black and white version-- the yellow treetops stand out, because the yellow is the only color that differs from the mid-tone. (The dark blue is noticeable, as it has a dark value, almost black, as well.)

#6. I decided for this one that I would try to select colors that would contrast in tone levels enough that you could see all the different shapes, even in the black and white version. For this one, I limited the color choices, as I only have one color, yellow, that shows up against the mid-tone and dark-tone colors. I rather like this combination of colors from a design perspective.

My biggest surprise with these was the orange color. It seems so brilliant (to me, even more than the red) and yet it is lighter than the red and considerably darker than the yellow. I would not have expected that!

It is also amazing how the purple and red look so much alike in the black and white photos.

I definitely want to study these more carefully! 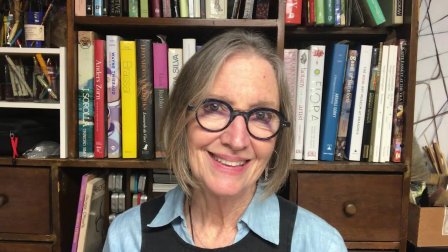