So for my project, I wanted to make something that was a little more masculine so I picked out some black and grey plaid flannel to complement my Sony a7S.

Since the flannel is a little bit heavier and thicker of a material than what Diana used in her videos, I didn't really want as wide of a strap. Instead of the 18" wide piece of fabric, I used one that was about 6" wide instead. The strap ended up being about 2.25" wide once the seam was sewn and the tube inverted.

The Sony a7S is a little bit bigger of a camera (and my lens is a little heavy) so I opted for the large leather end pieces. I found a dark, sleek black leather for my leather pieces. I also wanted some hardware that was easily removeable but strong and not so hard that it would scratch up my camera. I found some black plastic swivel clips at the craft store that seem to work really well.

The other side of the strap attaches via a keyring to the lug on the camera opposite the grip.

Overall, I really like how the strap looks and feels! It's super comfy for wearing all day and it really matches my personal taste. 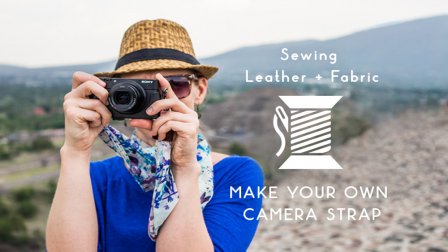