Over the years of being an artist, I've found that one of the areas that I'm pretty weak in is working out perspectives in a drawing, so I knew that starting with the basics would be helpful to me.

Here is my journey through following this course.

Starting with the absolute basics, I drew a horizon line and then on separate layers in my drawing software, I sketched in some little people and lined them up as suggested in the lesson. I would then move the horizon line up and down, as well as moved the people around in various different orders, just to see how it would affect the perspective.

Once I had the basics down and watched the lesson on drawing without knowing perspective lesson, I was then ready to move onto learning how to draw one point perspectives.

Again, starting with the basics, I drew a simple scene of a road, as shown in the lesson.

And then did some perspective sketches with some basic cube shapes.

And lastly, the bookshelf.

Going into this lesson, I already had a vague idea of how one point perspective worked, but it was nice to go back to the basics and have it broken down and explained in a really simple way.

After that it was onto the one point sketch lesson. For this lesson I was followed along with what was being drawn in the video.

It's a pretty rough sketch and I can't draw vehicles to save my life, but I still learnt a lot from this lesson. I did try and ink this piece, using different line thicknesses to effectively show the differences between objects that were closer and objects that were further away.

I then went onto using some of the other reference photos to try and put what I had learnt into practice.

I purposely picked ones that looked interesting and a little bit tricky. I really like how the top two came out, I felt as though I had a clear understanding of how all of the lines converge with the vanishing point. I did struggle with drawing the railway track, I was unsure on how to draw the perspective for that bend, but again, I picked it because I knew it would be difficult.

I then went and watched the bonus lesson on one point perspectives, just to see where I was on the right track (hehe) and where I needed to improve.

The railway track was interesting as I didn't realise that when objects start to bend, they then change into their own vanishing point.

Unfortunately, due to current events, I'm not able to go out and about as much at the moment. So for the assignment at the end of this lesson, I just tried to draw what I could see in my room.

It's a pretty rough sketch, but I felt like I was starting to understand 2 point perspective a lot more as I was sketching this piece out.

Then it was onto the two point sketch lesson. Once I had the idea down from the drawing shown in the lesson, I then went onto sketching 2 point perspectives using some of the reference photos.

Once again, I then watched the bonus lesson on two point perspectives, just for an extra bit of revision.

Next, it was onto the last section of this course, three point perspectives.

I followed along with the basic examples shown in the video and found it really helpful.

Going into this lesson, I had a vague understanding of how 3 point perspective can be used to warp objects and give them a real sense of height/depth. I felt I understood it more after watching this lesson and I really like how it can add drama to a piece.

I was pretty excited to move onto the sketching lesson for this part of the course.

While following along with this lesson, I actually set my canvas up in the same way that I did for my assignment pieces. So I took the reference photo, changed the opacity and then traced over the key elements and then I sketched out a piece based on the same photo. I also decided to ink the sketch this time, once again, using different line thicknesses to show which objects were nearer and which were further away.

I mostly focused on the buildings for this piece and kept the foreground pretty simple. Overall, I'm really happy with this finished piece, I think there is definite room for improvement, but I already feel as though I've improved a lot.

Thank you for uploading this course, it has really helped me a lot and I've already been putting it to use in my illustrations, not only with scenes, but also applying it to drawing characters, which has given my art that extra bit of style!

Thanks again and stay safe!

Aiming to do art for a living 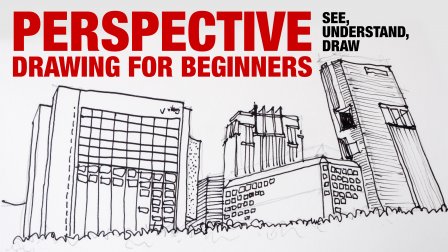