Thanks you for another incredible course! This one was excellent, with so many helpful tricks on how to create believable skin tones, hair, and eyes. I have been painting faces for years, but it was always a struggle to make consistently nice skin in a digital medium, and this technique took all the guesswork out of choosing colors. I followed along with the project demos pretty closely for now.  I definitely tried to make them my own, especially towards the end when I got comfortable with this style, but I figured I could follow them up with some original ideas for the course challenge projects later on.

There was a moment when I was painting this one where I thought it looked awful (that moment when you start painting the skin mod layer and it looks kind of alien), but I kept at it and I'm so glad I did! I love how he came out.

The female face was probably the easiest of all the faces for me. I find women easier to paint because they have a softer look. I also decided at this point to keep experimenting with hair styles and feature the one I liked the best.

No wonder this guy is a villain; he was a pain to paint! I don't really do unsympathetic, mean looking characters, and this project was really a struggle. I do like the finished look, especially when I played around with beards and mustaches, but I think this is one area where I need a lot of practice.

This was actually the second attempt at the character. The first one wasn't really working out, so I took a break from it, and when I came back I decided to simply start over instead of fussing over it. It turned out to be my favorite of the bunch too!

Last but certainly not least, this guy was such a blast to paint! Using a chunky brush instead of a soft one added so much character, especially on someone already so exaggerated and stylized. This is the kind of work that I've wanted to make since I was a kid. These classes have been such an amazing leap forward in quality and consistency for my digital art so thank you so much for such an awesome course! And I definitely feel as though I painted cool stuff ;)

Traditional artist with too many hobbies 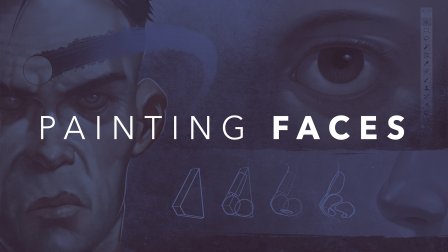 Painting Faces with the Power of Photoshop
Hardy Fowler