PVC and Bedsheets in a white room

I got to shoot 3 actors at my apartment (pictures and 3 demo reels, or videobooks). Since my white background was not there i managed to adapt using a white bedshet, suported by 2 PVCs stands of about 2,5m height and an extension boom, for painters, to hold the bedsheet in place. The background was about 5m away from the models and i was using a 85mm 1.4 all the time (mainly at 2.8), putting all those imperfections in the bedsheet out of focus. The lighting were 2 LED panels by aputure, one in a cheap softbox (keylight) and the other at 10% (backlight). I also used a room lamp, behind the subjects, just to add a little color to the seamless background (a 100w bare bulb with a CTB in front), but mainly there was nothing lighting the background, i simply adjusted the distance between the lights, my subject and the background, to get that grey tone. To correct all the green from those leds i added Minus Green in front of them. The last touch came with a 5in1 reflector mainly on the silver side (but also using the blackside as negative fill).
What i got to learn was that as long as its possible to get distance between the talent and the background, then its possible to achieve professional results, even in a small white room. As much negative fill as possible also helps to cut spill light, 5in1 reflector and black backgrounds in light stands (and 3 microphone stands) did the trick. 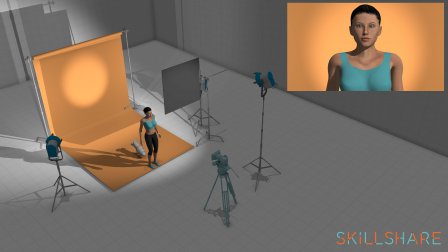