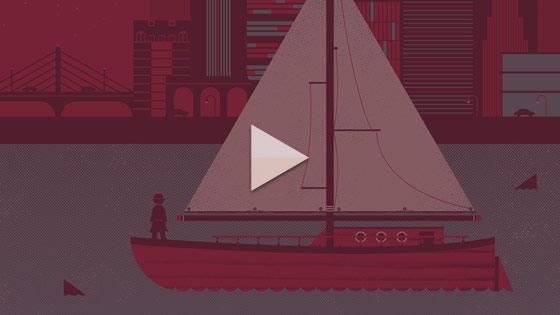 Being that this is a DKNG class, I figured I would make a run at creating a process video. I've been wanting to do this for a long time now and doing it I learned quite a bit just by watching myself work. To create this I used Screenflow, which is pretty cool. The only thing I don't like about it is the way it packages all the asset files into one package and makes the videos a proprietary format. I lost several hours of footage because the file didn't save correctly.

Give it a Watch 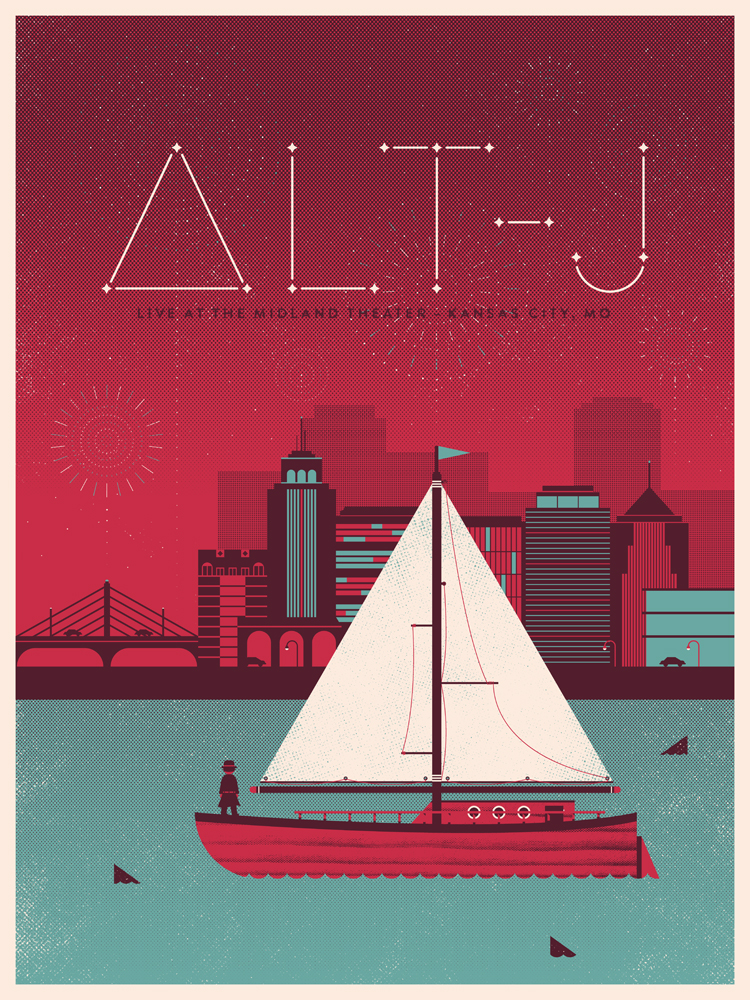 Adding texture in Illustrator is pretty difficult compared to Photoshop I took a lot of time just exporting PNG files over and over again. If anyone has suggestions of how to better preview bitmap texture application in Illustrator, please let me know. I'm really happy with where it's come out, thanks to all of the great folks and feedback here. If you have more feedback please let me know, I plan on continuing to look at it for the next week.

Here are a few detail shots as well: 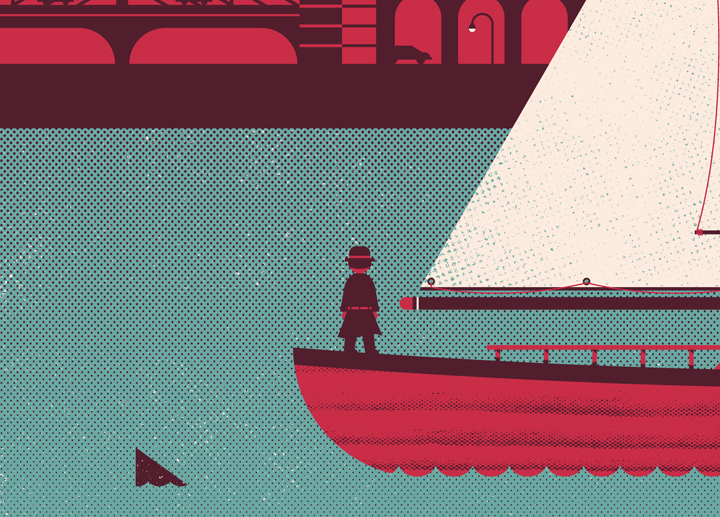 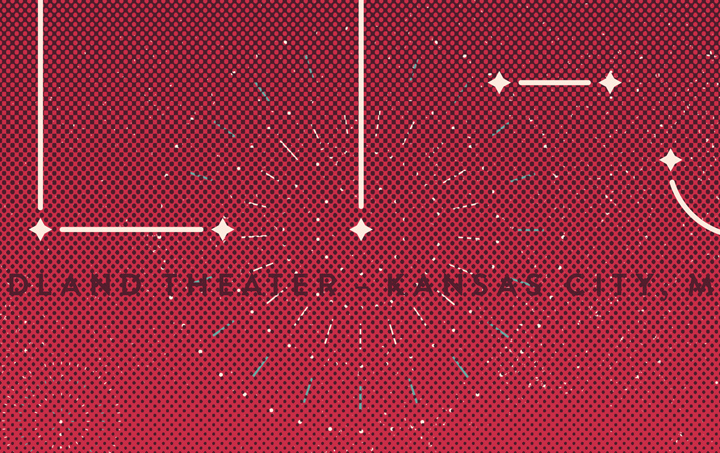 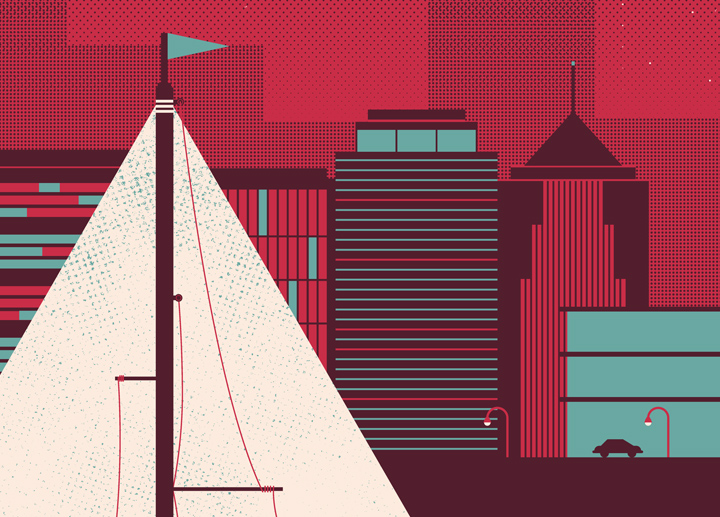 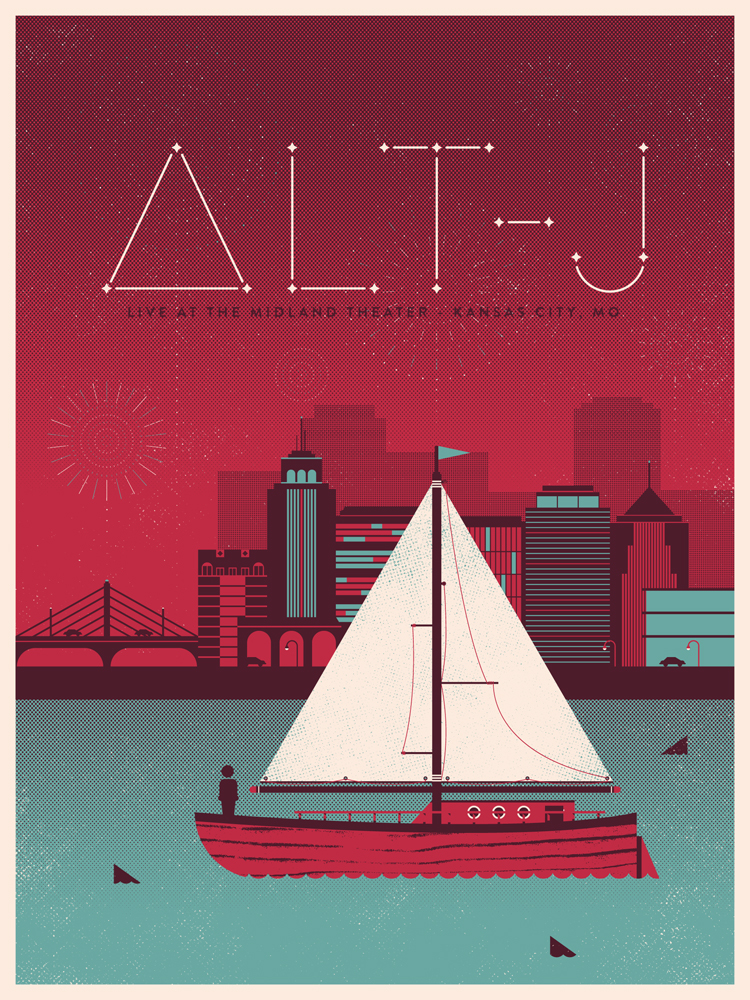 More work put into this thing. Still only at 2 colors. Not sure about all the texture and if it's working or not, would love some input. Still thinking I need to workout the guy a little further too. 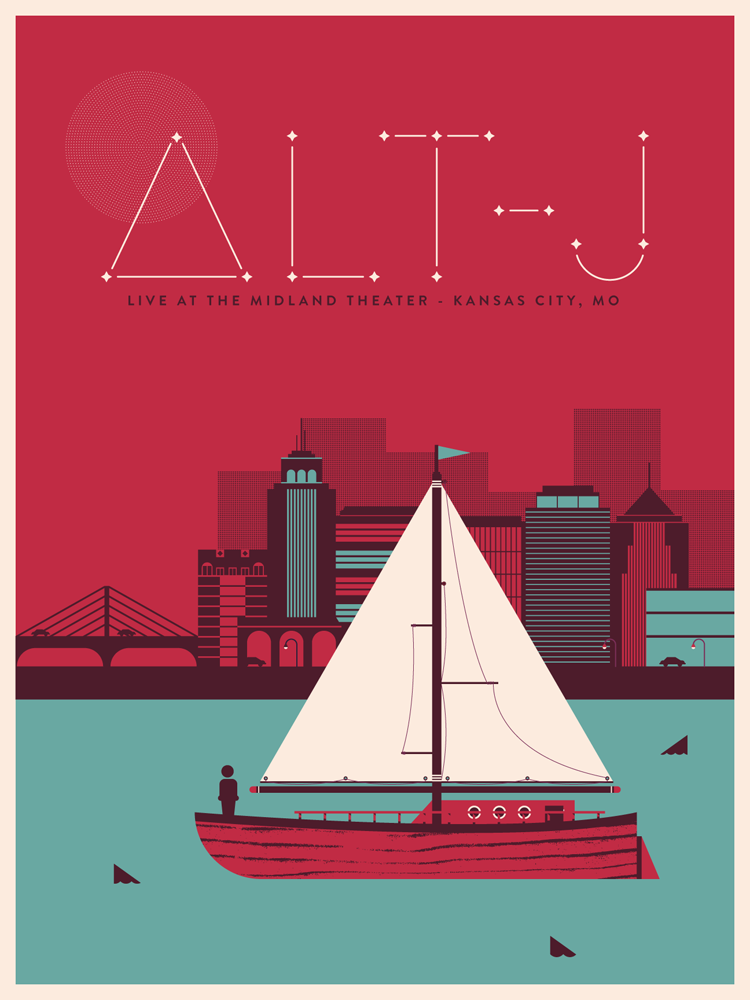 Getting some great feedback on <a href="http://drbl.in/gOIn"> Dribbble</a>, going with my initial tendency toward the right one. Tweaking colors just a bit to get the overprint right and going to try and stick to two colors. Starting to think about textural details, might be a bit too early for that though.

Thanks for the feedback on color guys! I thought I had explored the heck out of it early on, but taking another look at it really helped. Here are some additional looks. I like the left and right ones even better and am glad to get away from the purple, I was limiting myself by locking into it too early. The right one could be 2 colors even, the left would be 3. Not sure which I like best.

Also thinking that maybe I could add some half-tone fireworks in the sky in the background to liven things up a bit. Thoughts?

I've been spending some time in Illustrator on this thing so far. Here's what I've got: 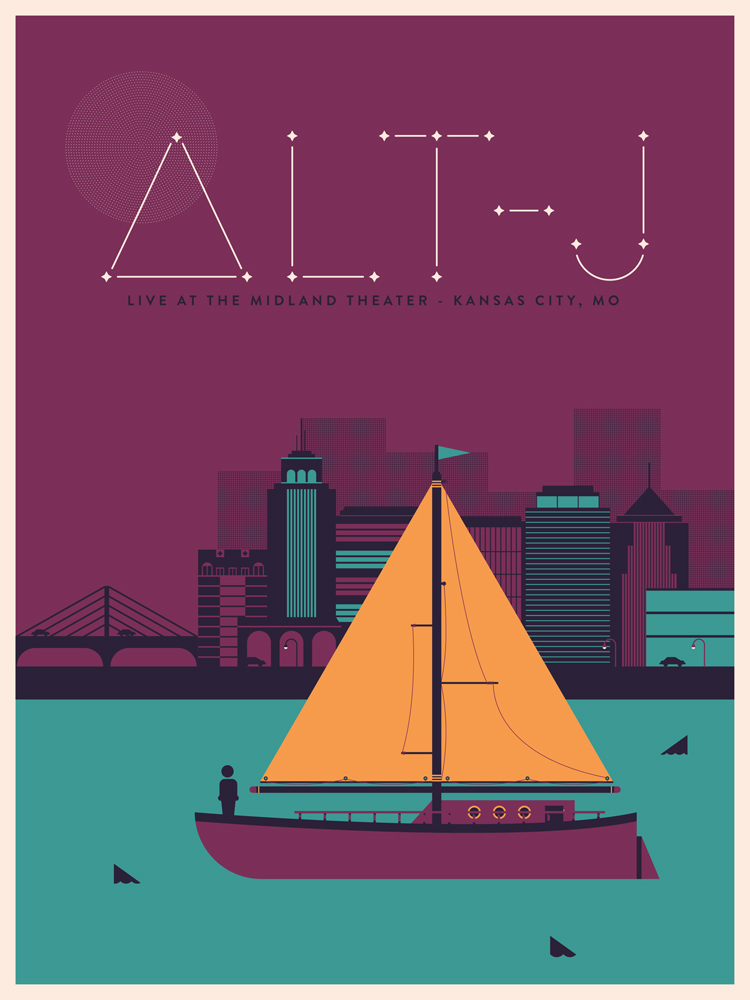 Still more detail to add for sure, the person is still just roughed in and I think overall it could just use more small details. And then some texture across the board.

I struggled with color for a while because I didn't want to go with a straight night time dark blue or anything. I wanted to make sure I was letting some of myself show through in the design and I tend to like a brighter color palette so I started with purple and went from there.

So far it's just 3-colors with the dark purple simulating an overprint of the blue on the light purple. I wanted to challenge myself to see if I could set this up for screenprinting or not. I think this will become increasingly difficult as I start to add texture because the colors are quite tone-on-tone to make for good shading. I can easily move to a full-color situation, I'm just not sure what the best way to go is.

Here is where I'm at with a refined sketch based on feedback: 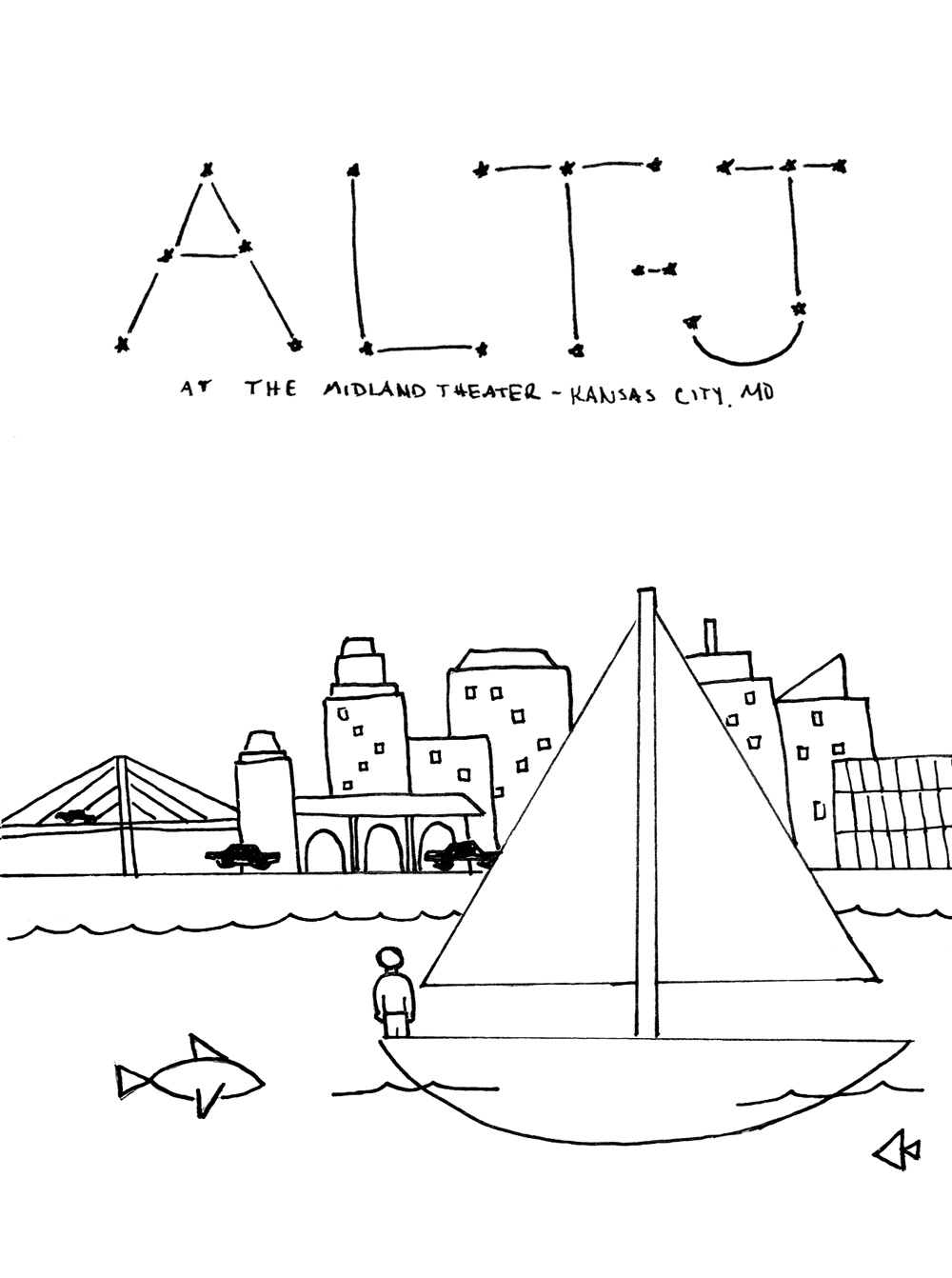 A lot of times I don't refine my sketches even this far and jump straight from thumbnails onto the computer to start creating. I wanted to challenge myself this time to figure out some of the compositional issues by hand before moving on. I think it helped me out quite a bit and was probably a lot faster than me wasting time tweaking for hours on the computer.

I'm digging the boat on the water and the incorporation of the triangle ∆ more than my previous sketches. I also made an effort to work in triangle shapes in a few other places. The letter A, the bridge, the top of the building on the right, the fish, etc. I am contemplating windows on the buildings lit up to form triangles as well, not 100% though.

I think I would still like to bring the boat down just a bit and bring the horizon line up just a little as well.

As I experiment with style I will explore just how much detail to add in. There may be a moon, clouds and other stars in the sky, more fish in the water, more detail on the boat, etc. I am just going to have to get going and make some of those decisions as I start work on the computer.

Here are two other sketches that I did to get to the one above, I am obviously not very good at drawing by hand, but the process helped me generate some more ideas as I was working through it. I definitely have thoughts flowing more freely when I have a pencil in my hand instead of a mouse: 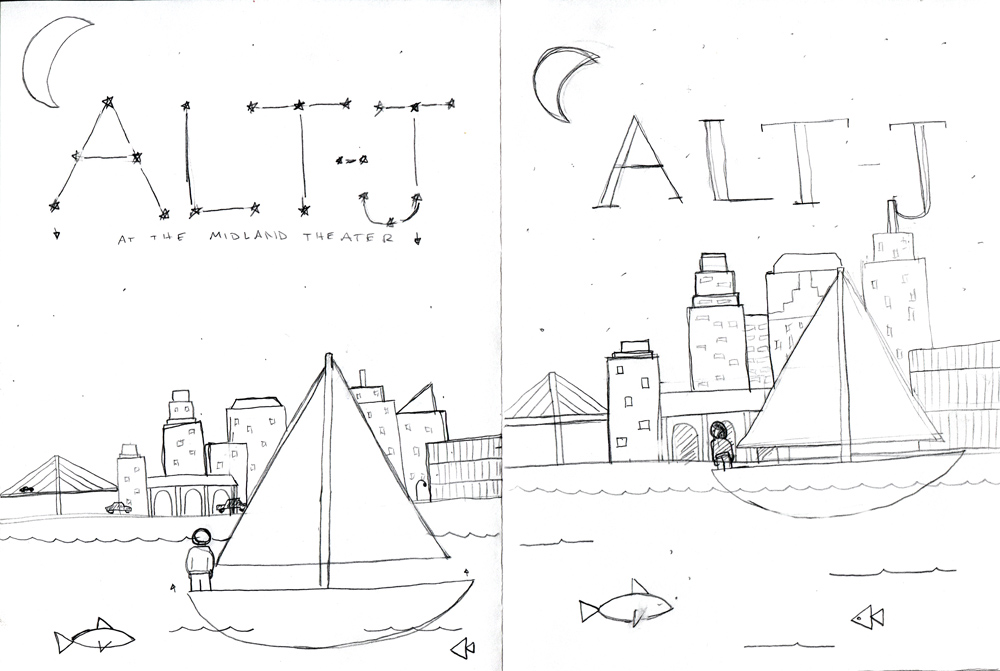 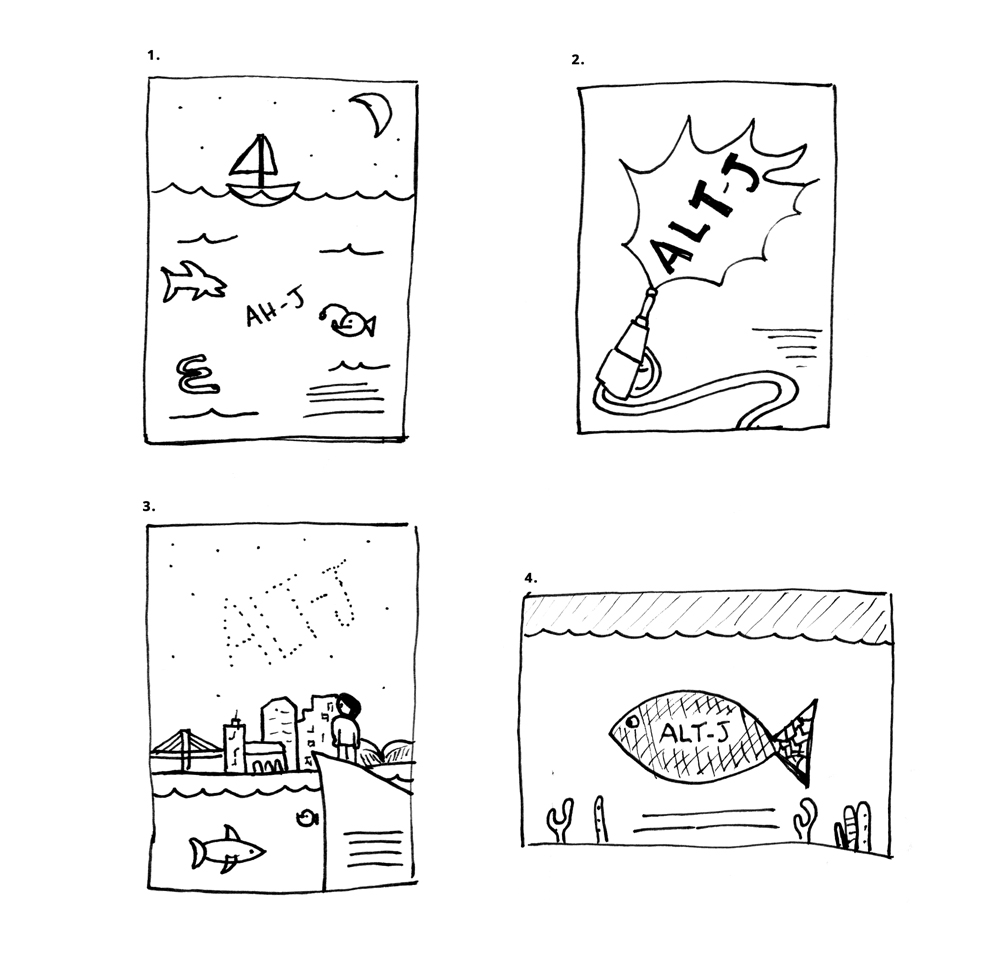 Above are the 4 thumbnail sketches that I think are working the best for me right now. See my research and reference below for my sources of ideas and inspiration.

1. I see this as the hopelessly lost on the ocean, but not alone. sort of idea. Just a boat floating out in the middle of nowhere, but there is also life under the sea happening as well.

2. This one is inspired by a point in the Fitzpleasure video where a maniacal gentlemen is pumping gas into a car, but the car is filled with water. He could be filling the car with water even. So I thought maybe a gas nozzle spewing out flames would be an interesting visual that kind of references back to some of the dynamism in their music.

4. Just a huge fish swimming in the ocean with the name of the band in its scales. The scales would be a tessellated pattern of triangles.

Alt-J is a British indie rock band who have actually been around for five years or so, but just last year released a debut album. It's hard to classify their music (besides just "indie rock") because it has parts and pieces of folk, hip-hop, atmospheric, electronic, rock and pop music. I think their first album has been received moderately well and they are currently on tour in the Europe and headed to the US.

BONUS FACT: I was checking out the post from Kelly Clawson whom is also doing an Alt-J poster and learned that Alt-J is the keystroke combination on a Mac to produce the Delta Symbol that the band uses in their materials ( ∆ ).

I've been a pretty big fan of Alt-J since the first time I caught a few seconds of Tessellate. I have actually been wanting to create a poster for them for a while, then this opportunity came up. I'm located in Wichita, KS, which is of course far out of the way for any band other than Kid Rock. But, luckily, they are coming to Kansas City in a few months so I figured I would make the poster for their concert at the Midland Theater.

I haven't really had a chance to dig into the meanings behind a lot of their songs, but I took some time and watched their music videos and read through the lyrics in more detail. They're actually quite a bit more serious and emotional than I had expected. Their music is about the torments of life and love, and is kind of like only coming up from underwater to gasp for enough breath to go on living.

I haven't been able to find much of their current promotional materials, except for horrible things like this: 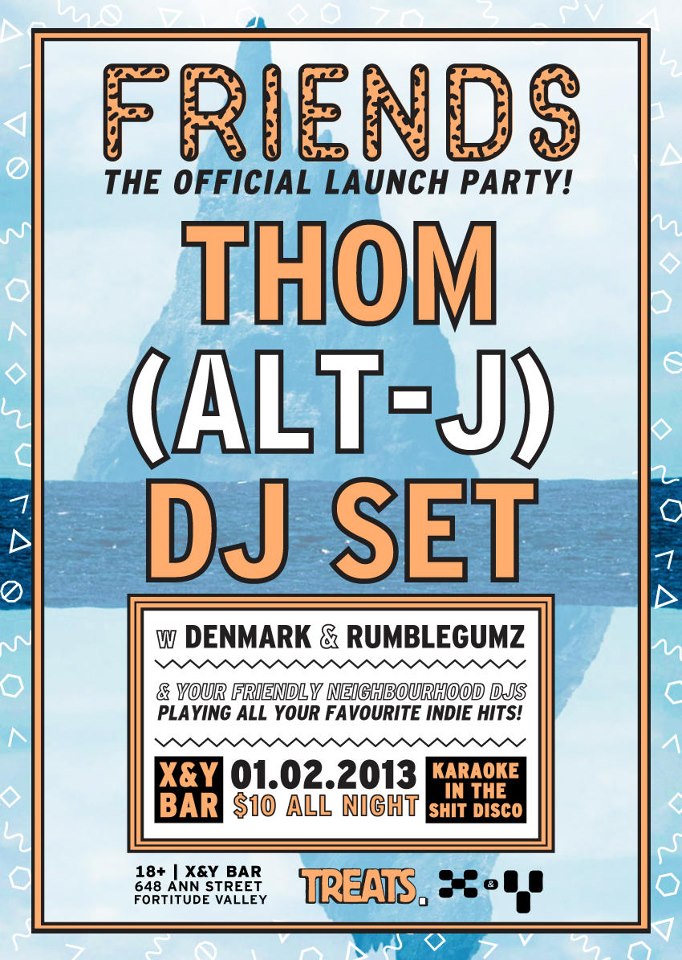 They have a few recurring themes in their music though. They actually use a triangle symbol on their album and even in place of their name on many occasions. The triangle comes up in their music as well, particularly in the song Tessellate. With lyrics like:

Triangles are my favorite shape
Three points where two lines meet
Toe to toe, back to back, let's go, my love; it's very late
'Til morning comes, let's tessellate 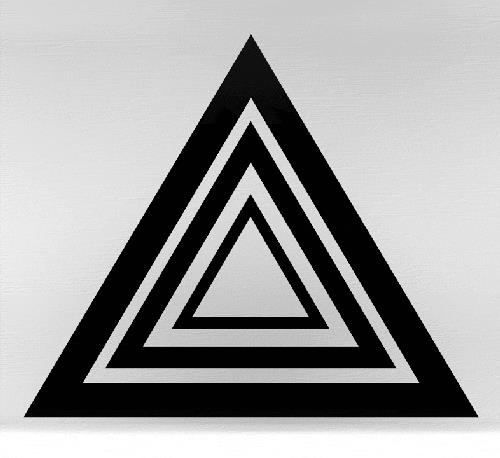 They also have several references to being underwater and have creatures or people swimming or trapped underwater in several of their videos.

I have a few ideas and am currently working through sketching out my thoughts, but I've done some initial style digging and have found a few things that I think fit the feel and mood of their music as well as some of the emotions that it stirs up for me when I listen to them. 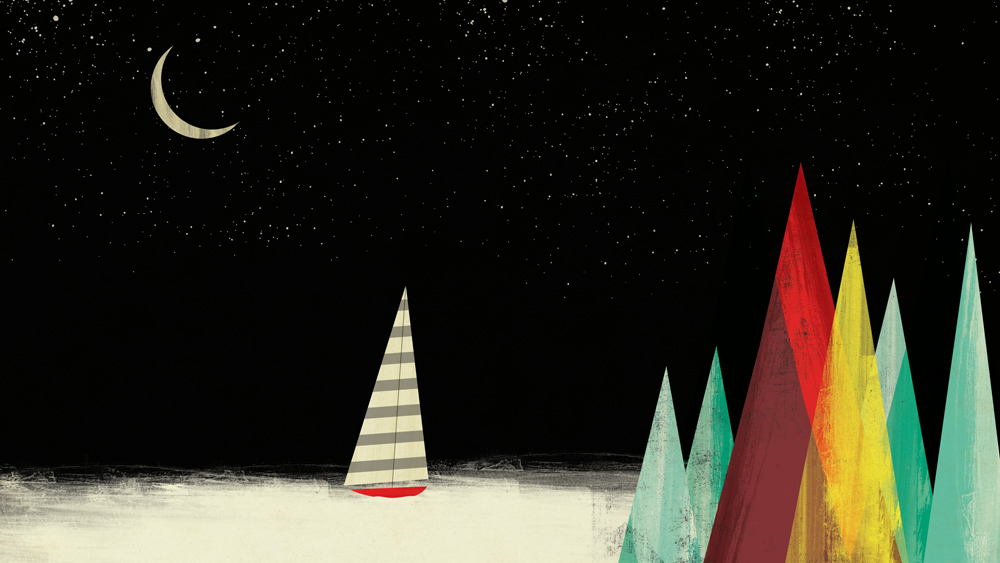 This is a piece by Andrew Bannecker that feels like the emptiness that I hear in some of their songs. 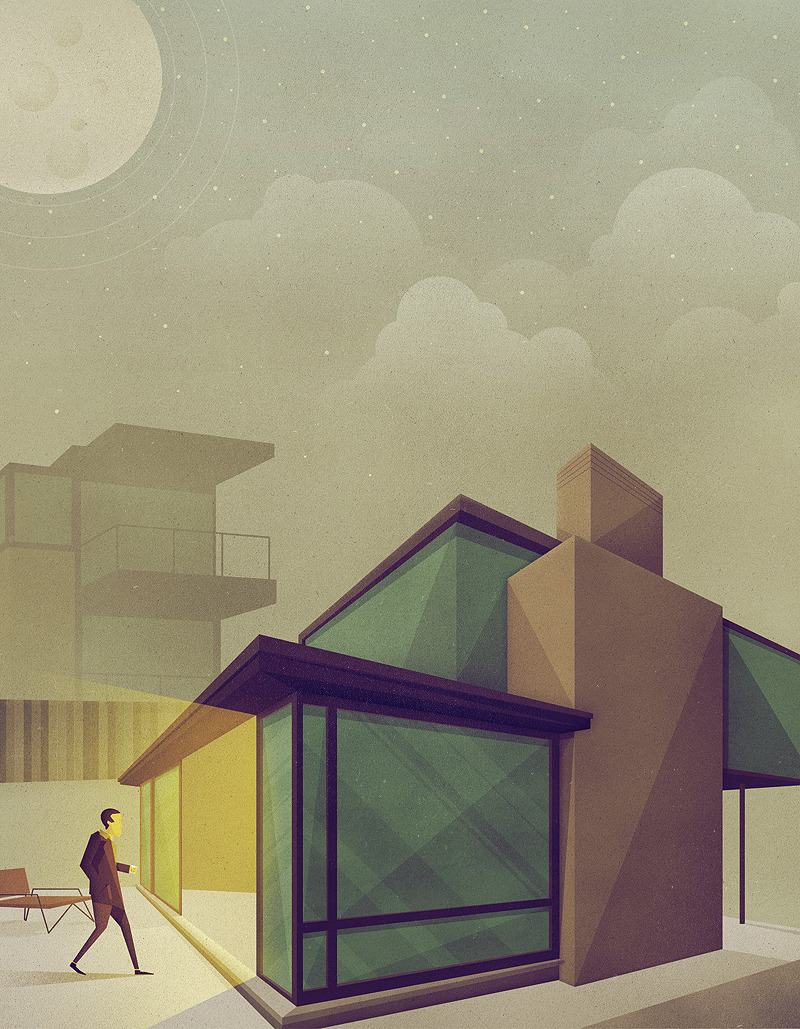 Justin Mezzell is an extremely talented illustrator and I love all of his work. I dig the colors and the use of light as well as texture in this piece. 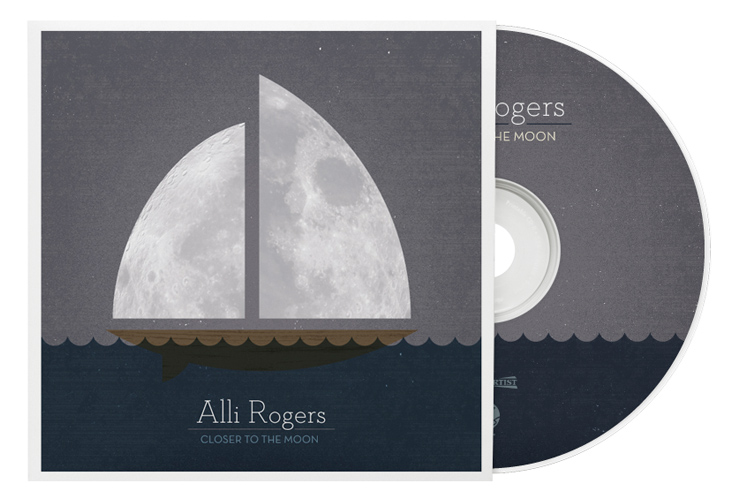 I love the emptiness of this as well as the water in this piece by A. Micah Smith. I'm digging the idea of a boat loast on the ocean.

Another one that has some references to futuristic cities that kind of resembles some of their use of electronic instruments and music. The city in the center of this one by Colin Hesterly adds some life, but again it feels empty at the same time because of the expansive horizon line. 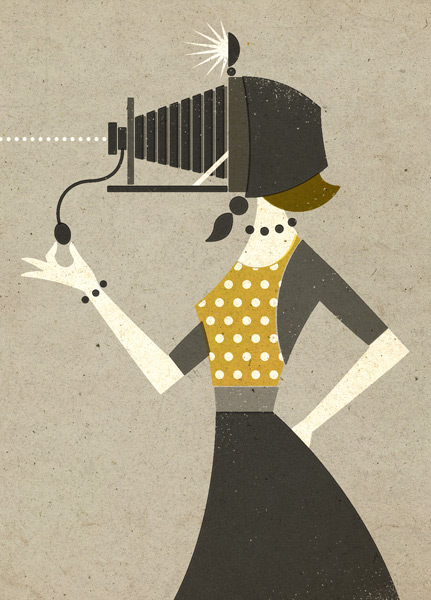 In their videos they have some strange visuals most of the time. I love the quirkiness of this illustration by Zara Picken.

I'll be finishing refining my sketches and ideas over the weekend. Really looking forward to this!