The prompt that I got totally stuck on during Inktober this year was 'Bulky'. I got so stuck that I pretty much gave up on the rest of the Inktober prompts, which was unfortunate since it was only day 3...

So after finding this class, I decided to go back and give it go, and I'm SO happy I did! Wow, I never imagined getting out of 'bulky' something that I absolutely loved to draw and had so much fun with in the development process.

Here is my mind map explosion and it was quite a journey. It took a long time before ideas began connecting with other and making sense, so you really have to just throw everything that comes to mind on the paper and it may not be until much later when you'll realise the significance of the thought.

My final realisations for 'Birdcage' and 'Wind in the Curtains' came right at the end, a day or two after I began jotting down ideas and after making initial sketches of net snare traps, which the visual I had for came after thinking about forced animal labour... and so on.

These were my first thumbnail sketches, trying to figure out the form I had in mind. Eventually, I realized I was trying to draw a net snare trap so then I went and looked at some reference images on google.

After I drew these I felt sure I would never upload them to the project since I thought they were really ugly and not worth sharing. Now I look back on them almost a month later and I can see how actually they are not SO ugly as I had first judged them to be and actually kind of interesting because I can follow how my mind was working and adapting the ideas with each new thumbnail... AND I don't believe I would have ever reached the point of drawing a birdcage if I hadn't started by these circular, cylindrical, and teardrop shapes. So just as Marie-Noëlle says, the process and journey have just as much value, if not more than the 'final piece'.

My second set of thumbnail sketches where I came to the idea of a swinging birdcage and played with some compositional and tonal ideas.

More developed sketches, trying to figure out how the curtains would blow out of the birdcage. For these I checked a lot of reference images on google and Pinterest, and when I still couldn't find a perfect reference image for curtains blowing out of a window, I decided it was okay to just make it up a bit. I think in the end it doesn't have to look exactly accurate, just believable.

And the 'final piece', which I'm mostly happy with. Many things didn't work out quite so well as I'd hoped, such as the linework. I need to practice making thinner, straighter and lighter lines with my Chinese ink brush. And the watercolour turned out a lot different to how I'd planned it on the small test card on the left side, but I also like its lightness in some way and I actually love how the black ink from the border seeped into the watercolour, which I wouldn't have seen if it hadn't dried so light in the end.

Mostly I'm just happy that I managed to make something out of a prompt which had thrown me so far off track I'd basically given up on making anything for Inktober... AND I'm actually excited to make the final piece again, now that I have all the development work ready to use. I think that makes the difference when you invest a lot of time and thought into building a concept that you're in love with because then you won't stop being excited by it and you can just go on experimenting and creating works that excite you.

Thank you Marie-Noëlle for this wonderfully supportive and enriching class!

one step at a time 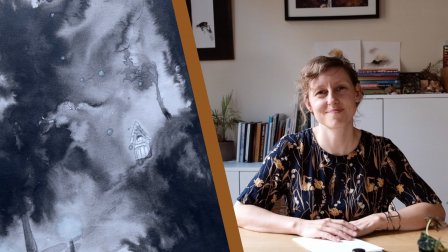