This class was great. I learned a lot from the DKNG guys and really enjoyed networking with some other great designers and artists. This project was a lot of fun, and I'm eager to take what I've learned and apply it to future projects.

Here is the finished piece. My plan is to print it digitally. 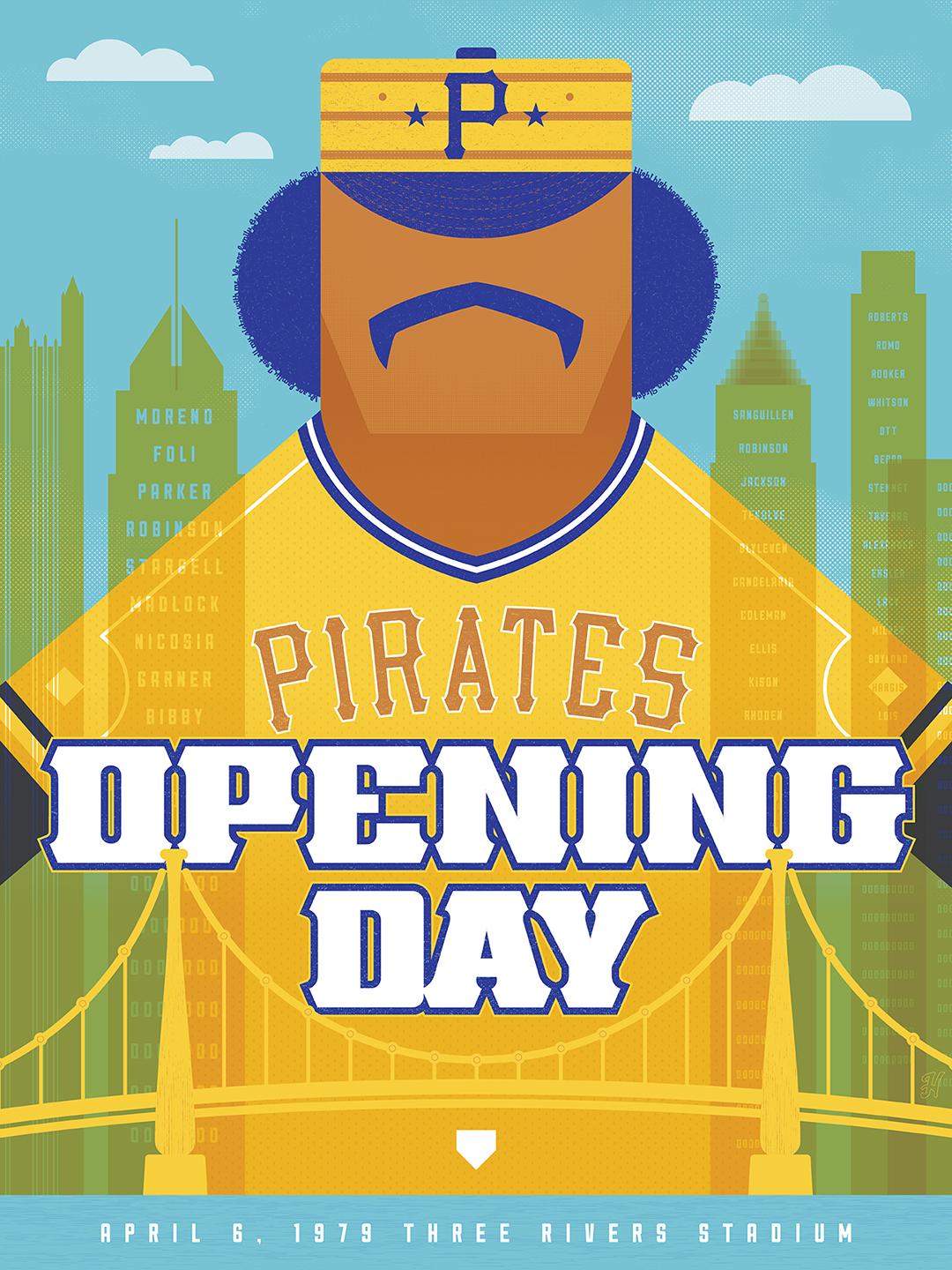 I wanted to include some closeup shots too, so you could see the various textures a bit better: 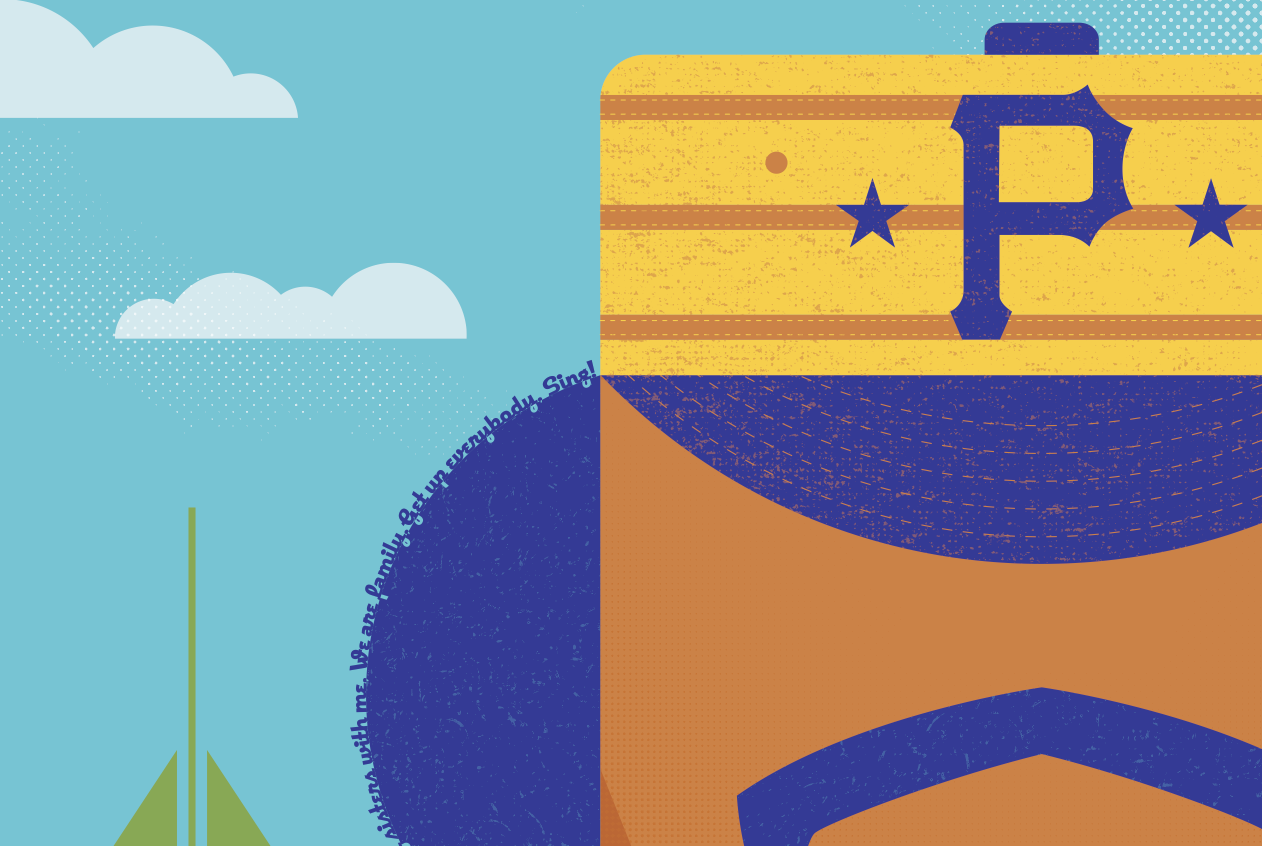 My logo is hidden on the bridge: 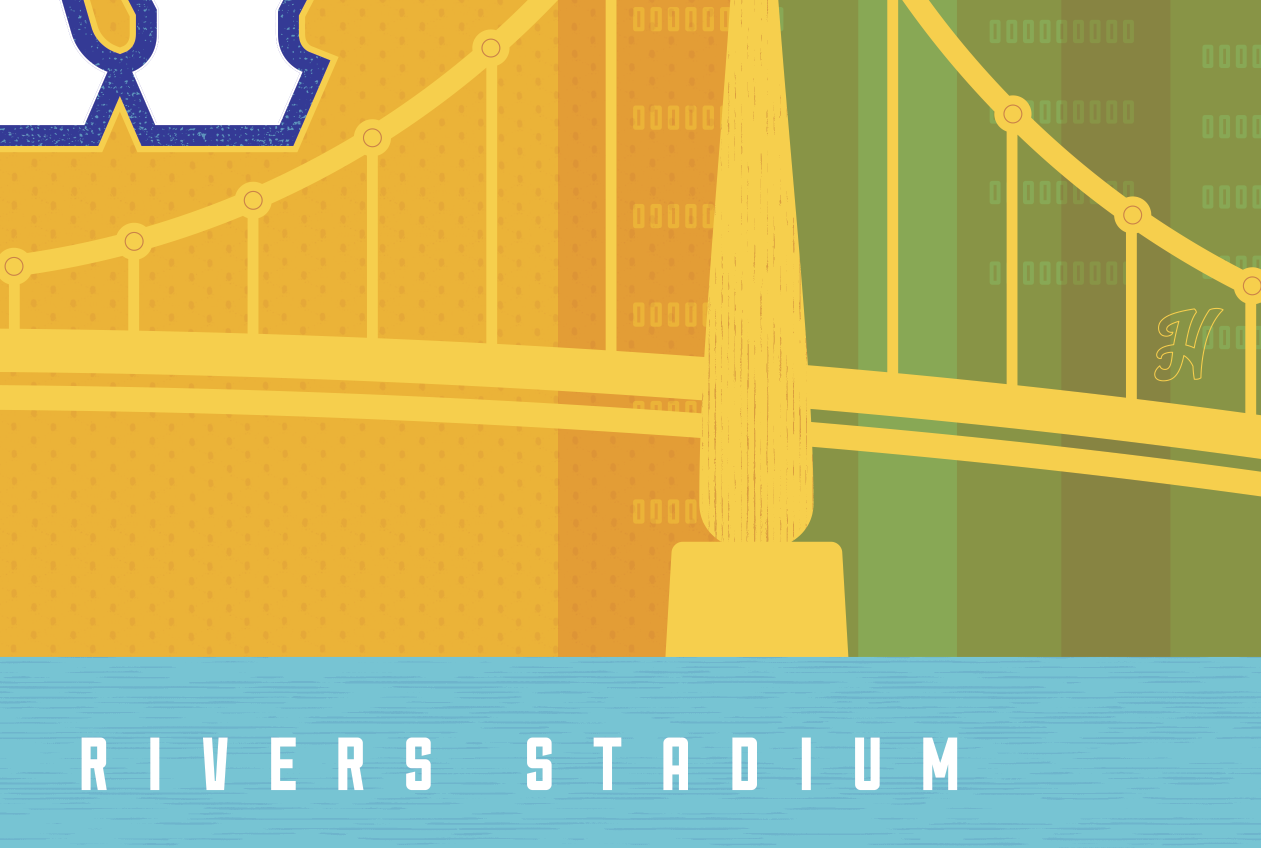 I liked how the names of the players looked with the different textures and when overlapping the jersey: 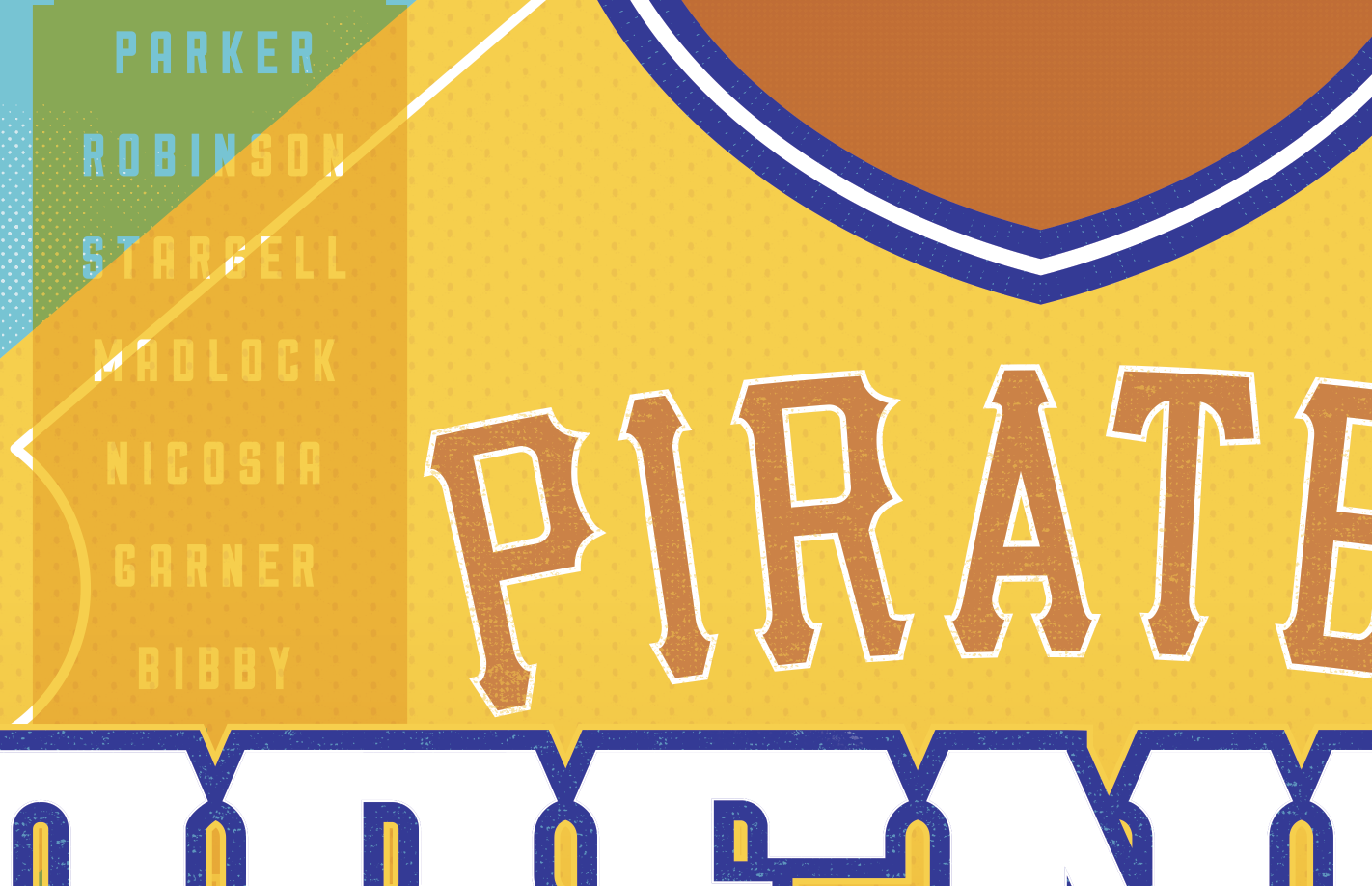 The player used in this poster was loosely based on former Pirates centerfielder, Omar Moreno. I had the privilege of meeting him after a game last season. 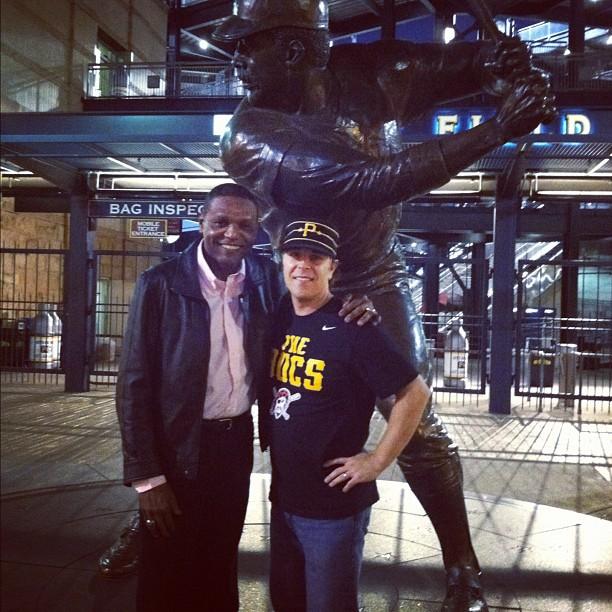 Thanks for following my project!

Here is what I have so far. I'd still like to add more texture to hair and face, and maybe some to the purple areas of the main headline as well. 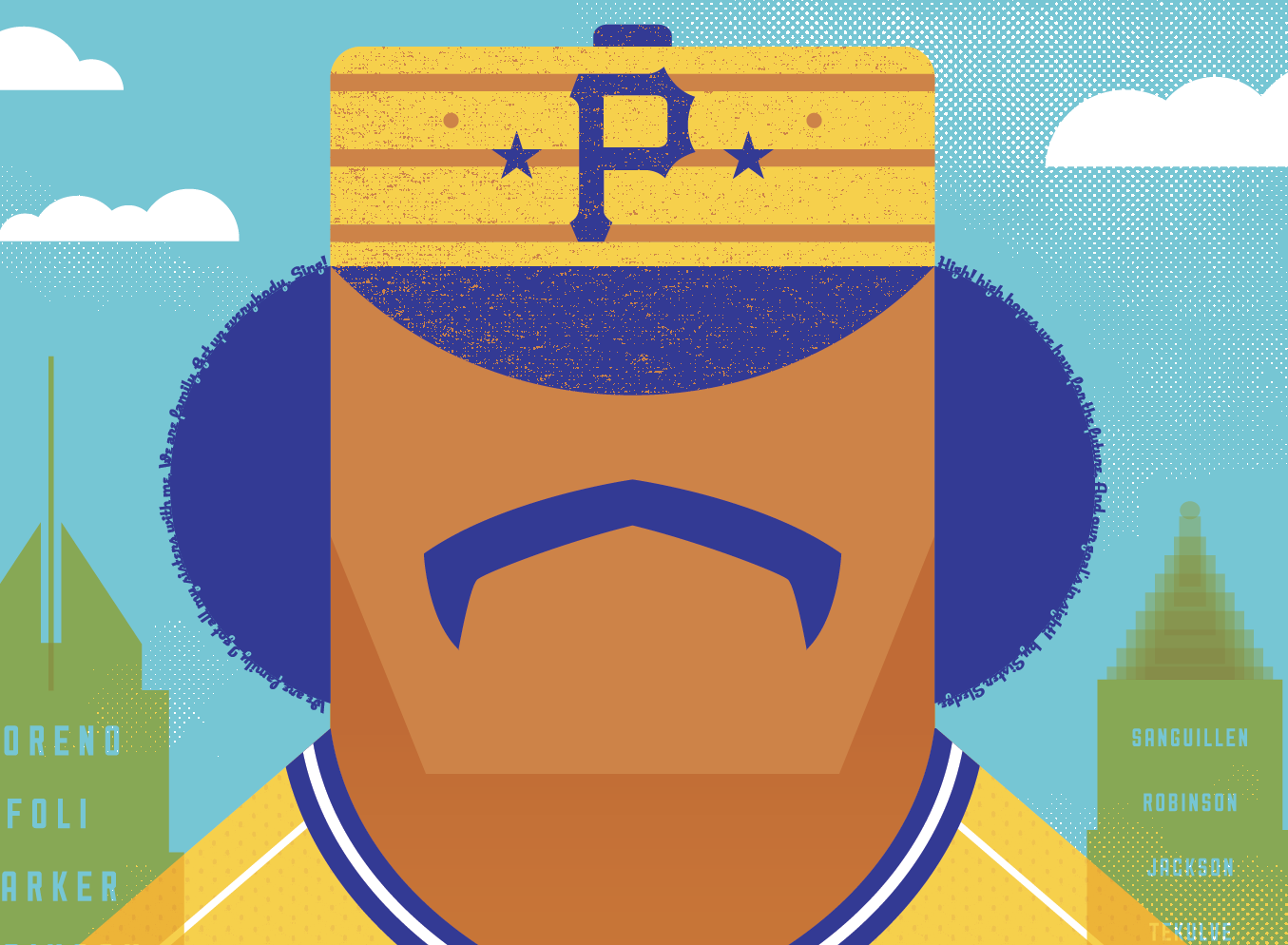 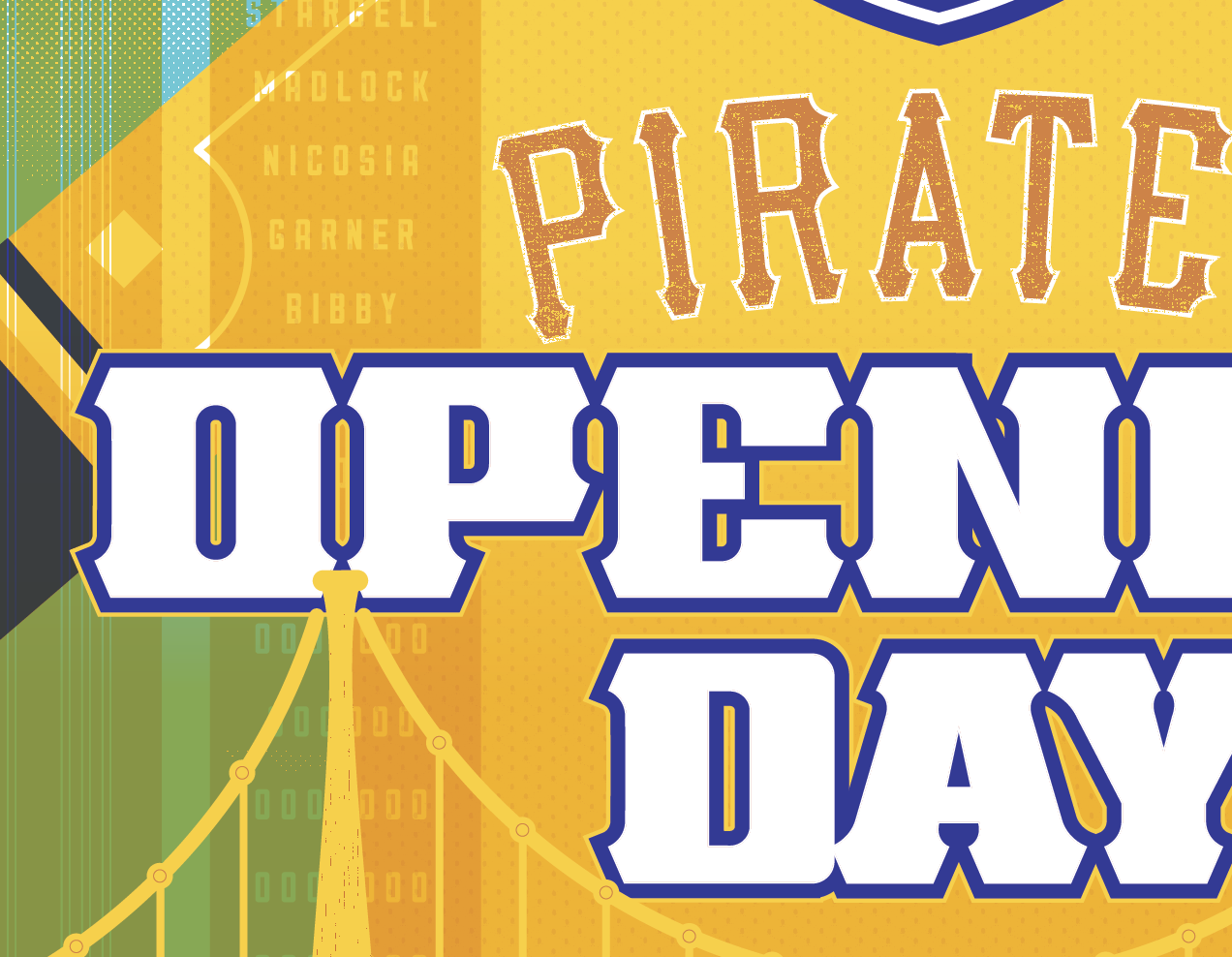 After receiving some feedback (thanks Dan!), I reduced the color scheme down to 4 colors, and by using the "multiply" transparency, was able to achieve some additional hues. I am digging the new colors–I think they look more vintage now, without sacrificing too much brightness. I'd love to know what others think about it.

I also spent some time on the hair, punching it thru the ovals on either side so that more of the sky would "shine through." I also added the rest of the Pirates 1979 roster on the buildings. (Baseball fans might like to know that the names on the Highmark building on the left would be the starting lineup in the World Series later that season.)

Next I really want to add in some halftone texture, like the DKNG guys showed us. 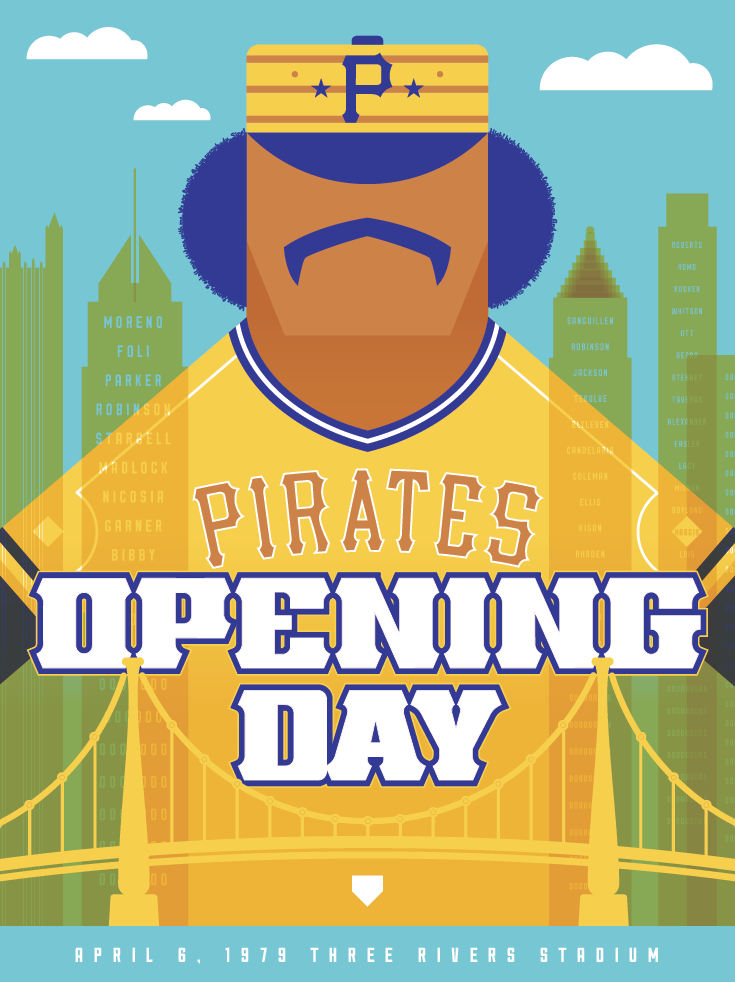 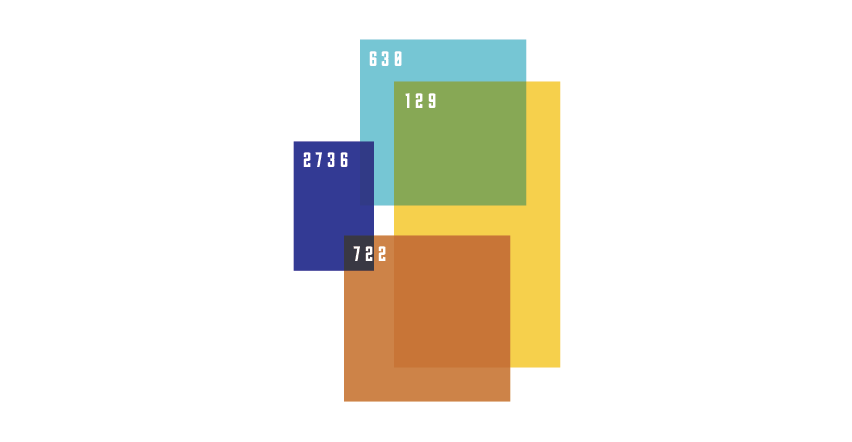 Based on some feedback I received (thanks Nathan!), I completely reworked the headline type to better match the Pirates logotype that you see on the player's jersey. I definitely want to keep working on the colors, but I am very happy with the way the type turned out. I really feel it helps pull everything together better. Please give me some feedback, even if you disagree!

Next I plan to look at the overall color scheme, and then hopefully wrap this thing up. 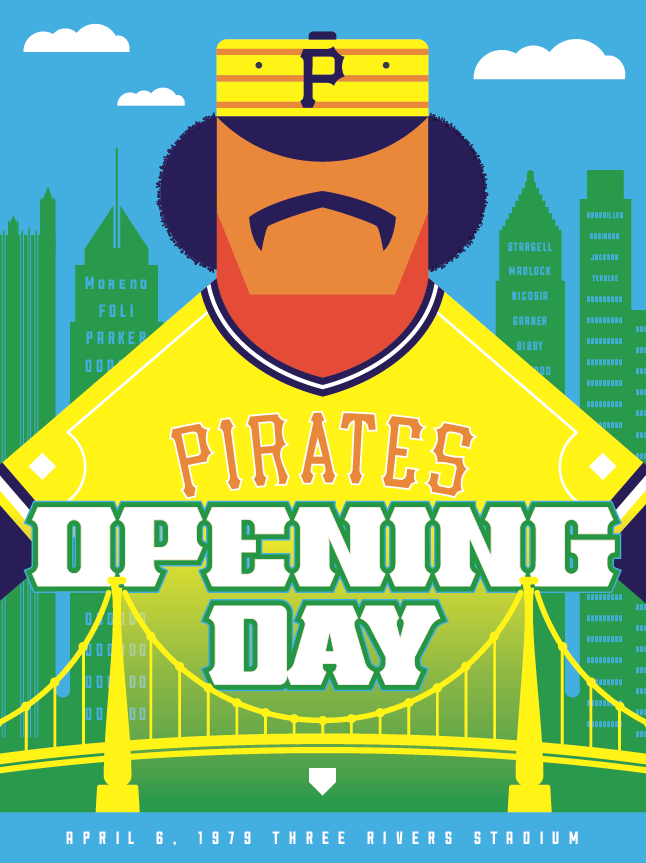 I've added the rest of the roster to the buildings as well as windows and some other details. Baselines have also been added to the diamond shape of the player's jersey to signify a ballfield. I've also adjusted some of the colors within the headline. I'm considering adding stars to the ballplayer's hat, since that was something the Pirates did during that era. 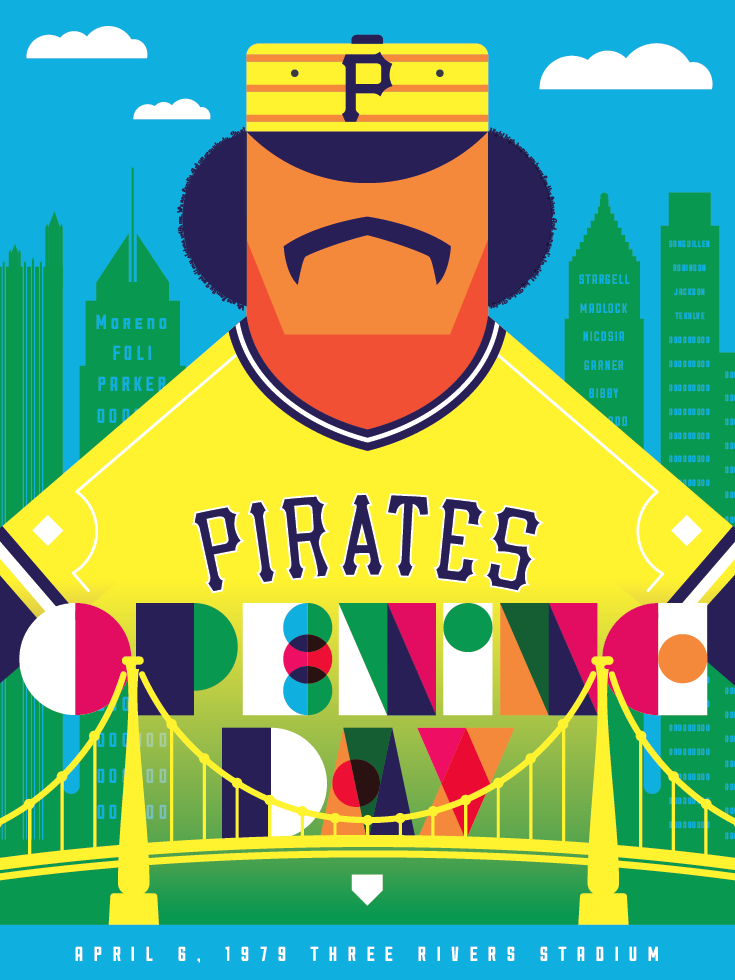 Below is a comparison of what you see above alongside a version with a few more elements: The Gateway Clipper in the river slightly behind the bridge, as well as festive balloons floating into the sky. I think I'm leaning towards the cleaner version on the left. 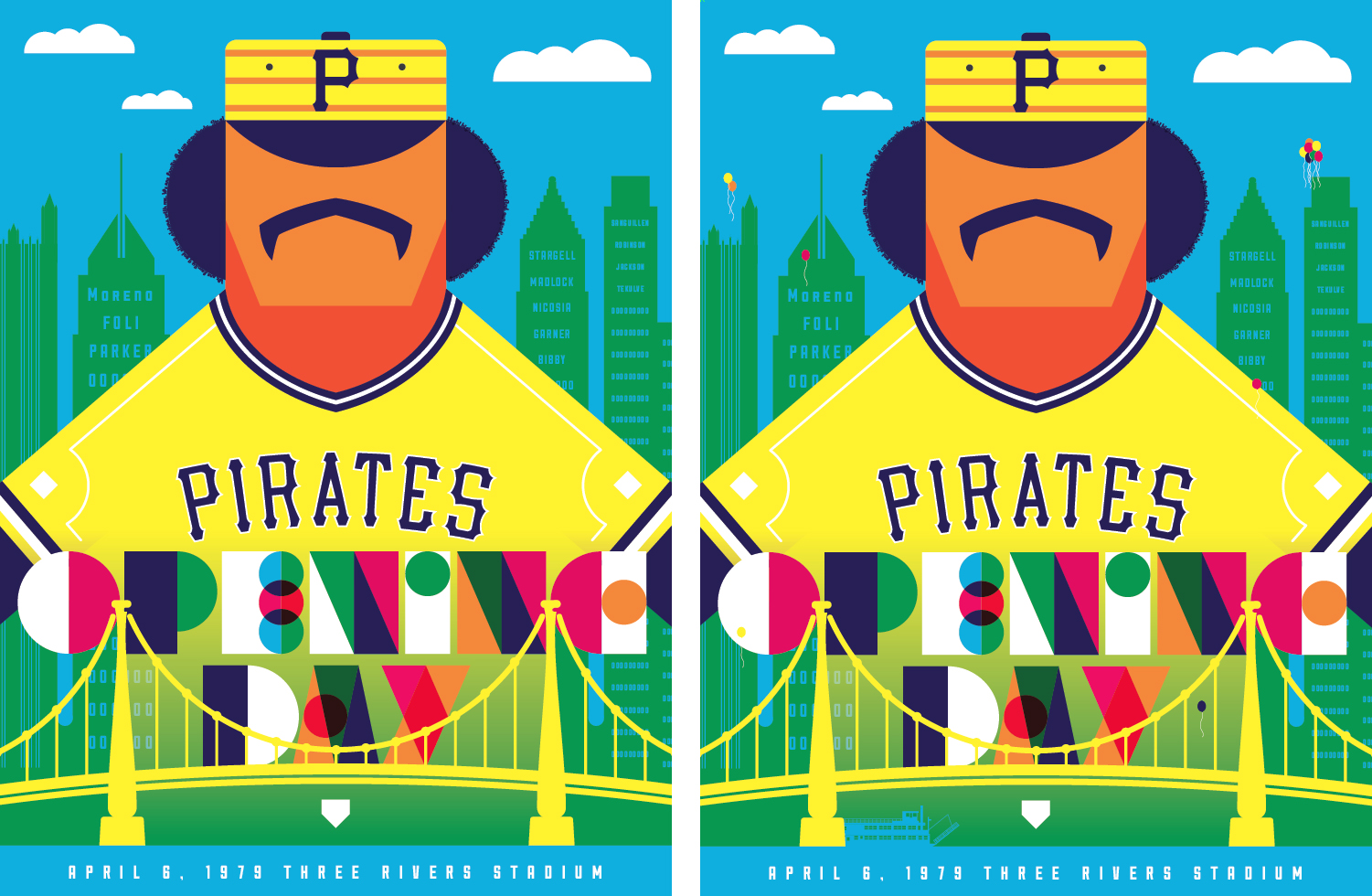 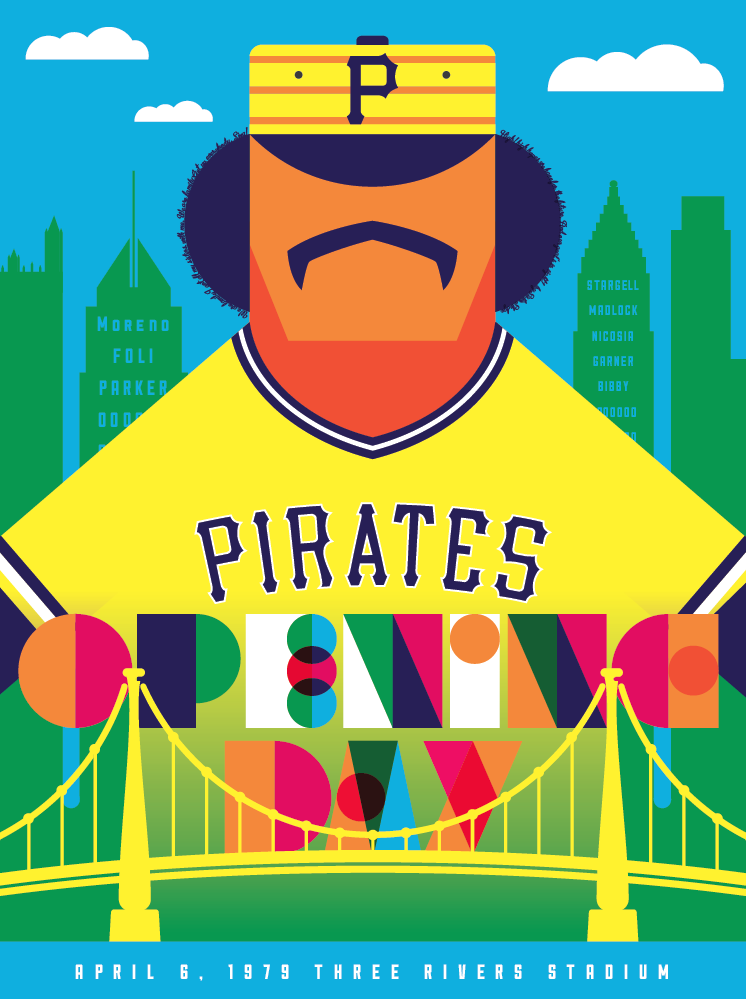 Details
The outer texture of the hair is actually comprised of lyrics from the Sister Sledge song, “We Are Family,” which was adopted as the theme song for the Pirates in 1979. I've also begun to add windows to the buildings in the background. They contain the names of the players in the Pirates lineup on Opening Day. The bridge stanchions are made of baseball bats. 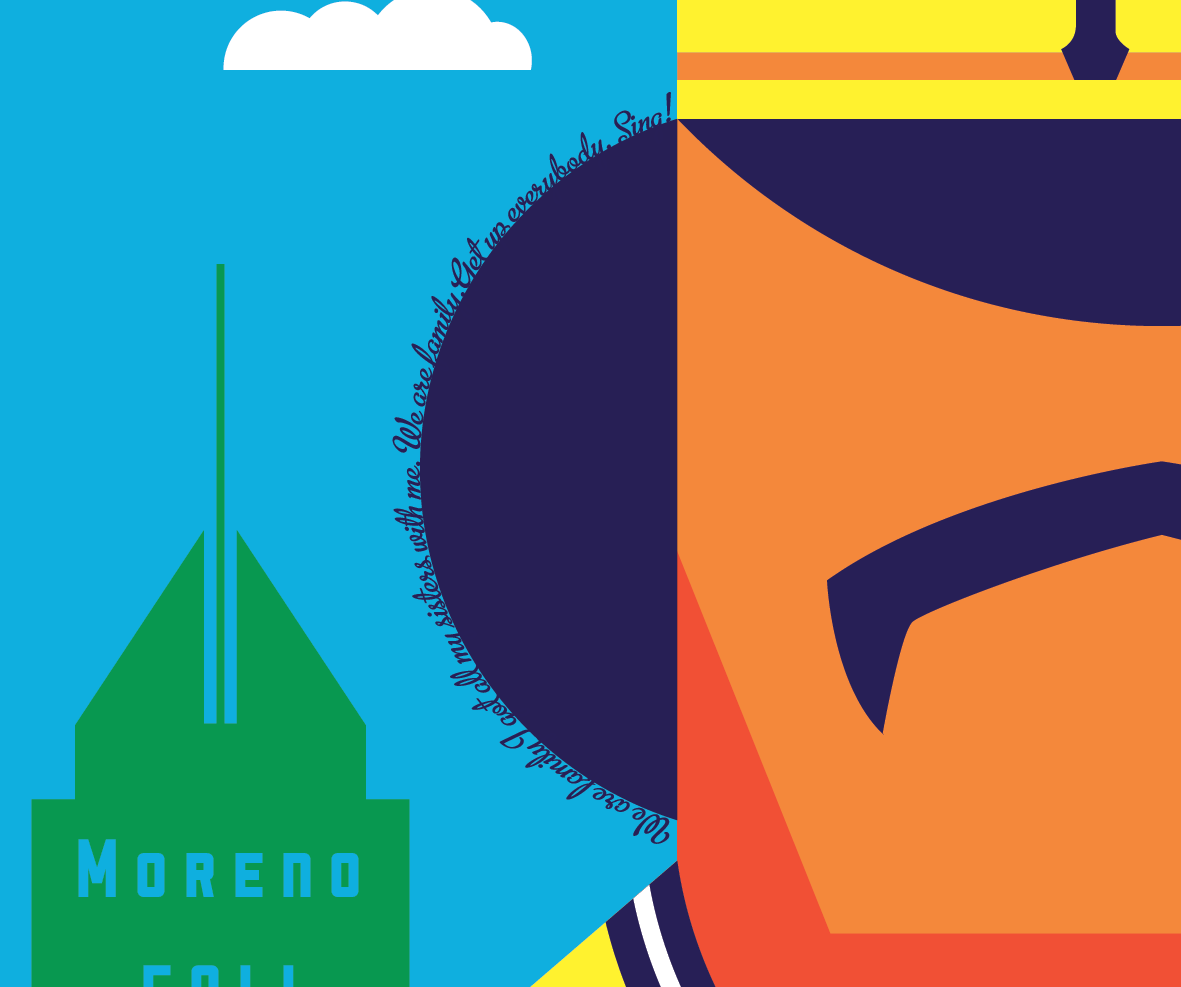 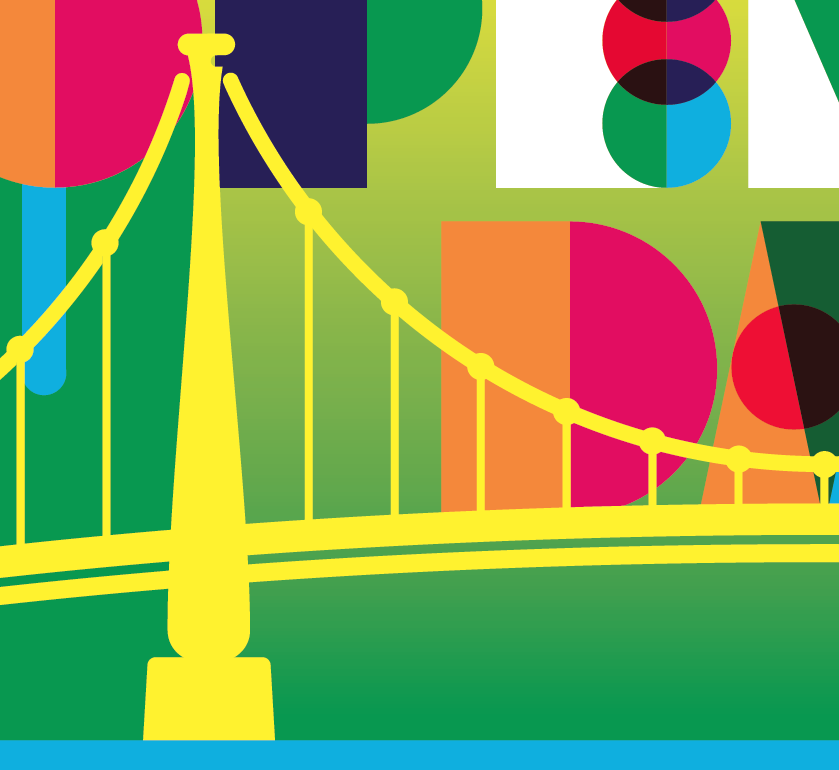 I'd like to add a few more personal touches that are meaningful to Pirate fans before I move into the final stages of adding texture. I'm still considering swapping around some of the colors of the words “Opening Day.” Any feedback is appreciated! 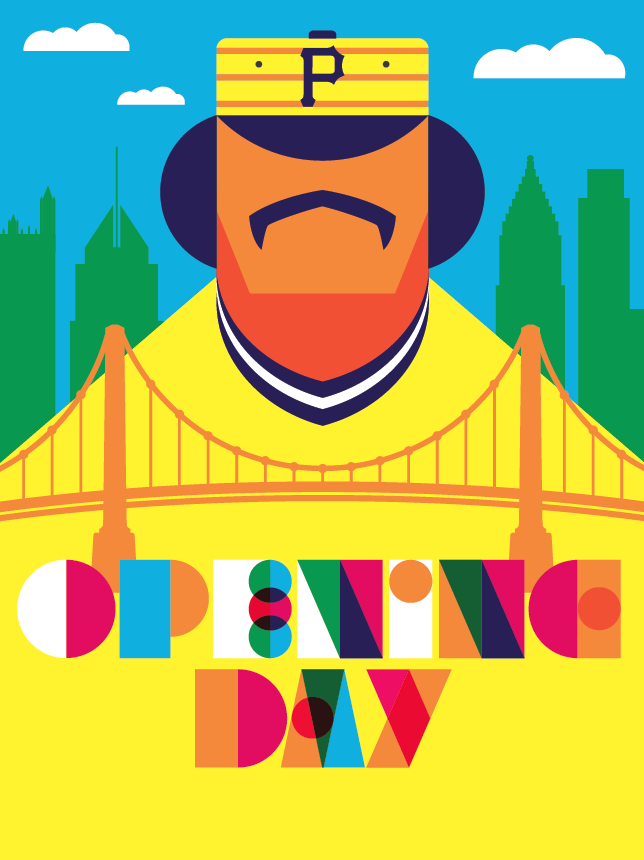 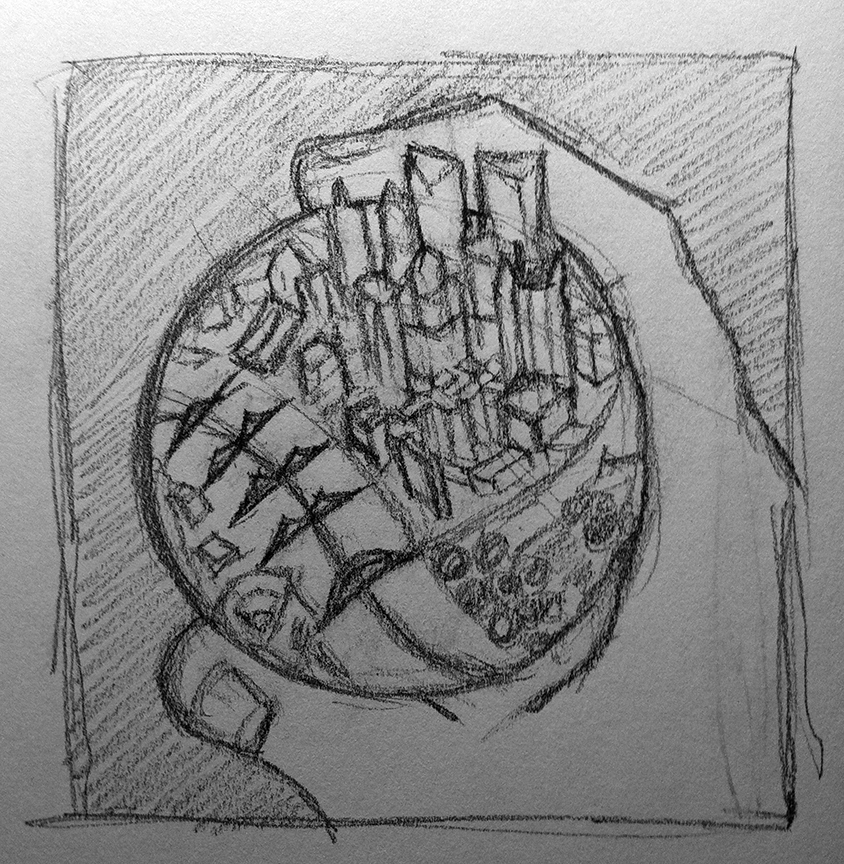 For this concept, I wanted the Allegheny River and bridges over it to represent the laces of a baseball. It's my way of saying Pittsburgh is a baseball city. 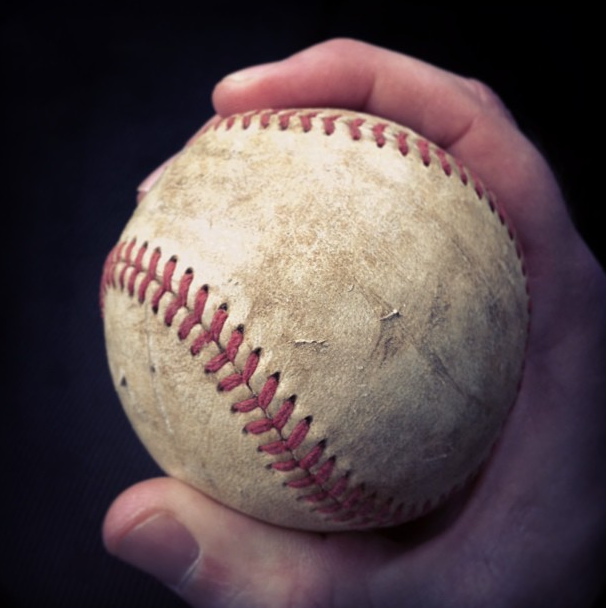 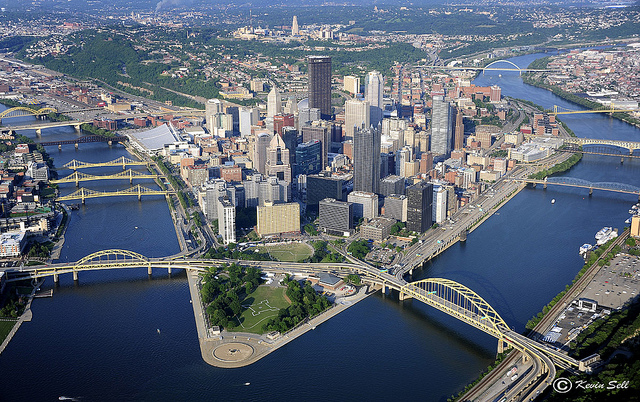 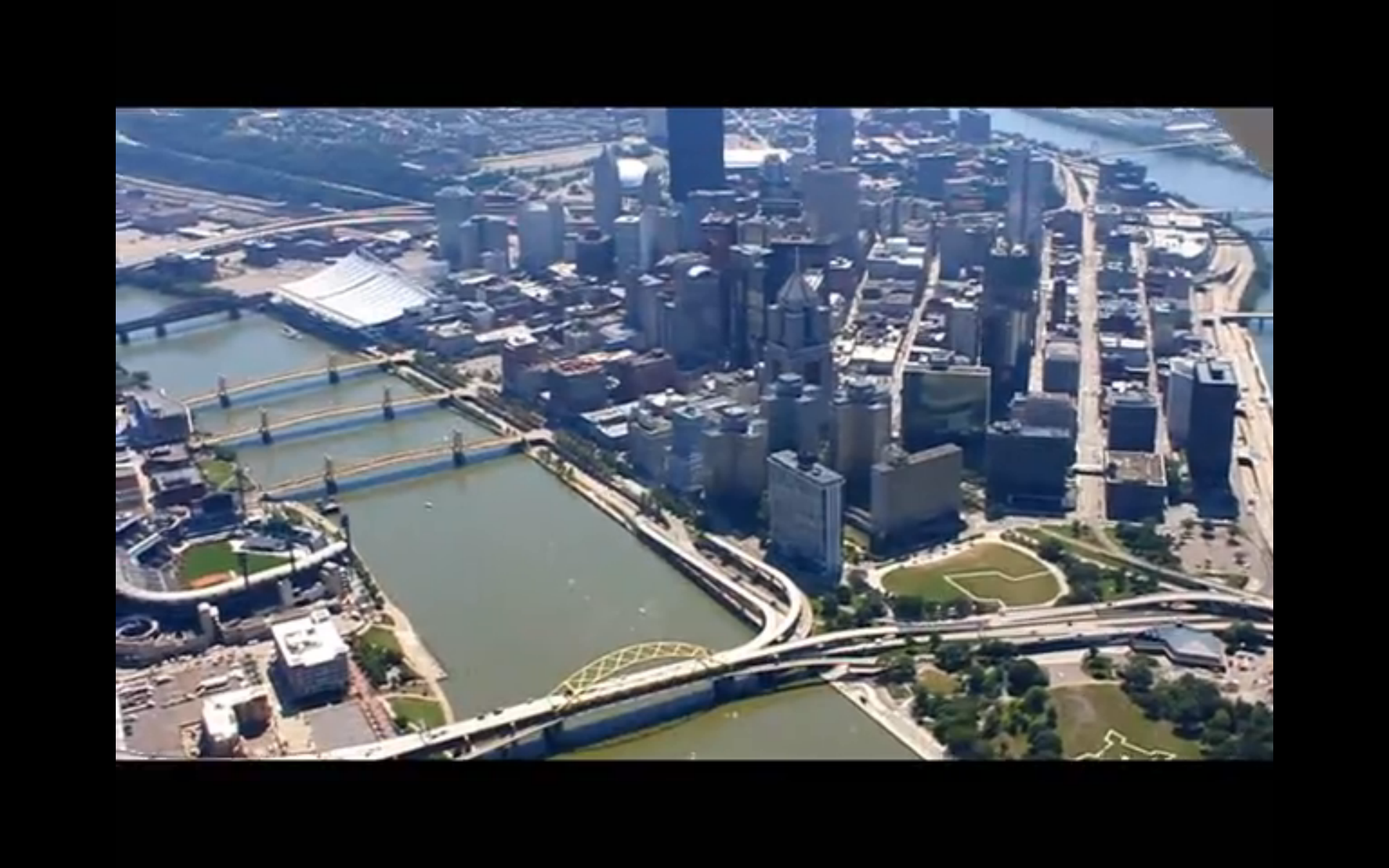 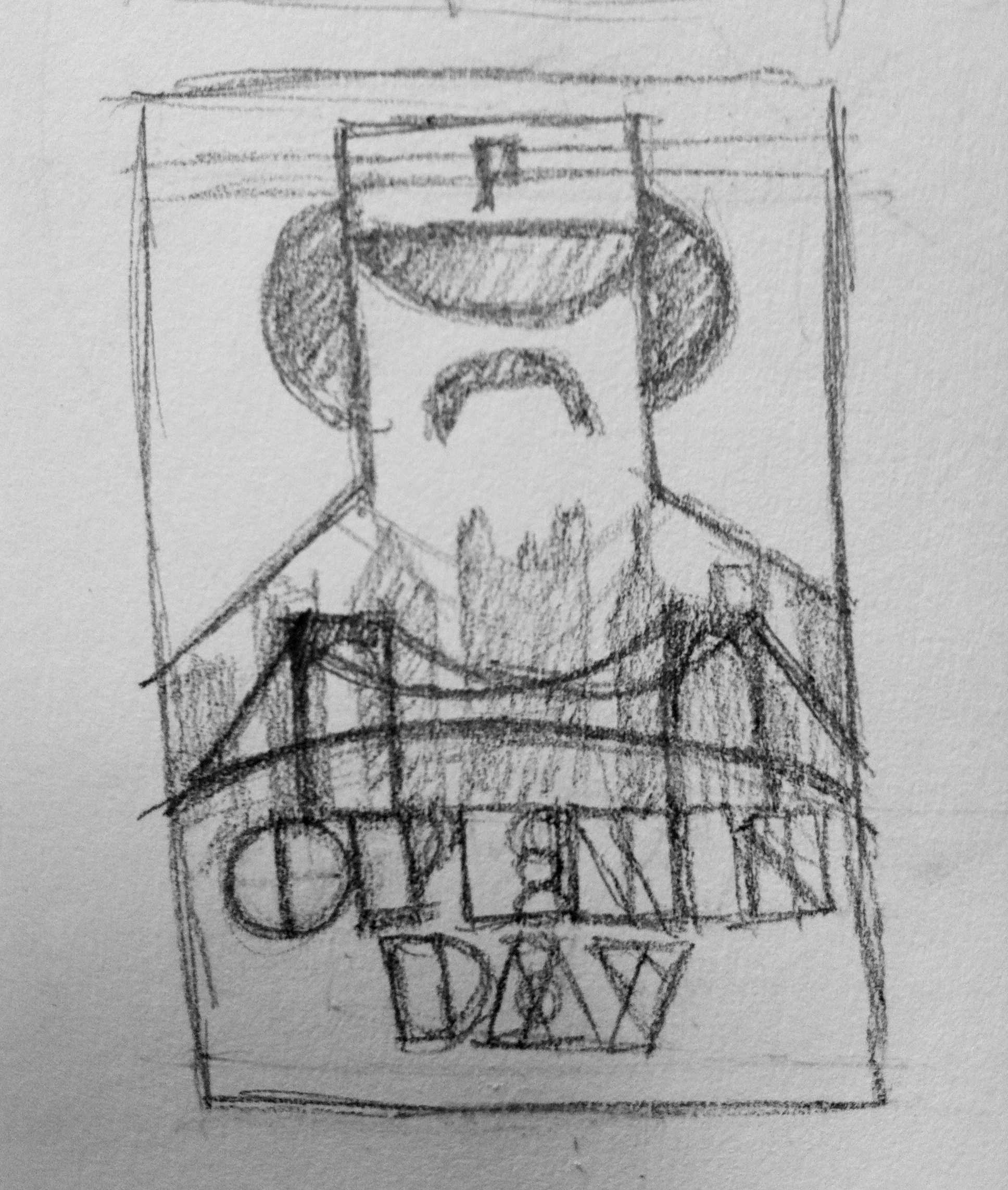 So the background silhouette is a very simplified version of the baseball player, Omar Moreno. Contained within this art's borders is a cityscape in the background, with the Roberto Clemente 6th Street Bridge spanning the poster and the words Opening Day in the foreground. I think I'd like to add the words Pittsburgh Pirates, as well as the date for the first home game of the season.

I want this concept to reflect the crazy style, color, and typography of the 70's, not the typical baseball-looking nostalgia we've grown accustomed to seeing (admittedly, I do love that stuff, too).

Here is some visual inspiration I've found so far: 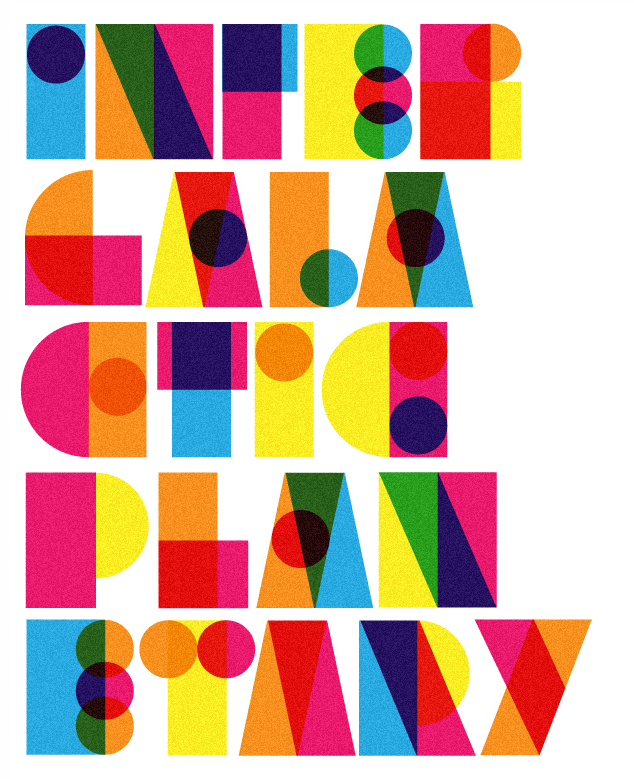 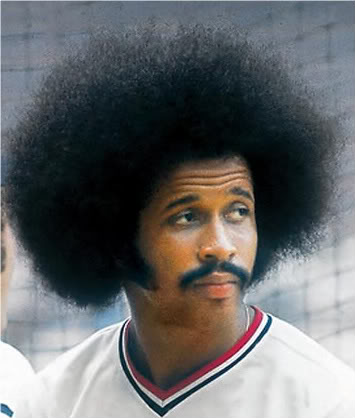 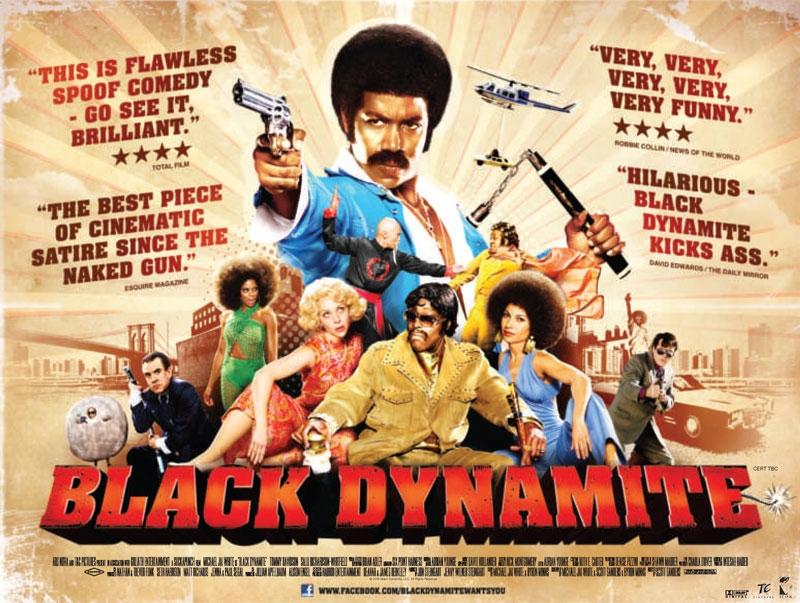 I think Omar Moreno's look is a perfect fit for this era: 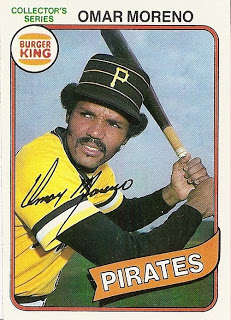 I really like the idea of a central figure silhouetted against the background with the scenery taking place within it's borders like this Star Wars piece done by Olly Moss: 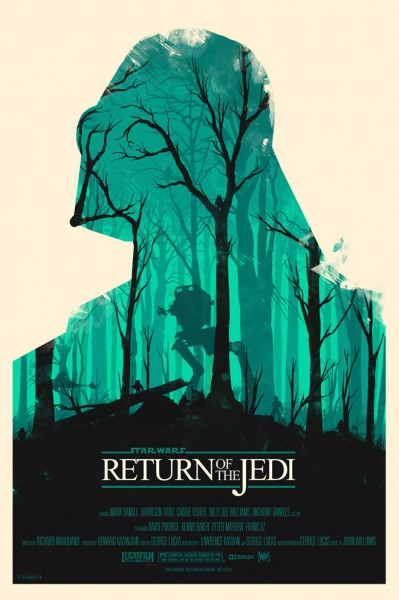 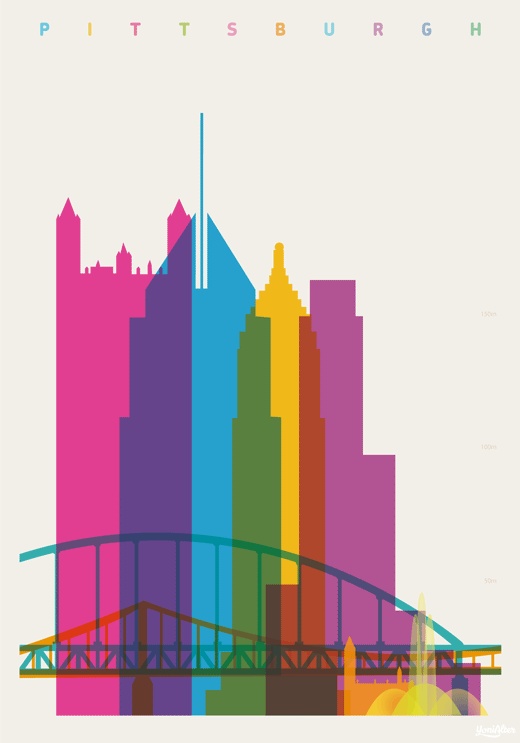 I grew up in western Pennsylvania in the 1970's and 80's. Some of my earliest memories are of my dad listening to baseball games on the radio as worked outside in the summer heat, or tuning in via our tiny black and white television set. This was the era of bright colored uniforms, cookie cutter stadiums, huge afro hair styles, and disco music. I would play wiffle ball in the backyard with my friends from sun up until sun down, emulating the batting stance of every player I knew, especially my beloved Pittsburgh Pirates.

The summer of 1979 was a special one for me. I was signed up for Little League for the first time. The Pirates had the makings of a pretty good team. Sister Sledge had just released their first hit album, We Are Family.

For my poster, I wanted to take a personal trip down memory lane of the '79 Pirates by announcing their opening day game at Three River Stadium. It would be filled with hope, not knowing yet that they would go on to win the World Series that year.