One Week Of Random Thoughts

I love putting together little books like this but I never really know what to put in them. I started with slightly heavier paper because that's what I already had on hand and just went with the 4 1/2" x 6" measurements provided. As it happens, my paper measured 9"x12" so it was easy!

I also couldn't find my gluestick so I used white liquid white glue and a brush to get a thin layer. I had to clamp the book overnight but it holds really well. The paper was already stiff so it didn't make a difference in painting.

I had actually been meaning to run through the palette in my pan set again so I filled the first page that way as suggested. I didn't map out the spaces first, just did it free-form.

I've finished the first week of filling in the spaces, seven to a page. I had to resist making it coordinated and instead let each day speak for itself. I'm not going to fight that so much going forward

There was a big chunk of paper that had been the start of an abandoned nebula painting. I didn't have any plans to go back to it so it made a great cover. I think it looks better than the original painting idea actually!

Thank you for the great class, Kiala!

Only a few more pages before it's full. 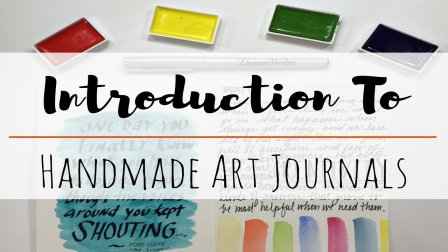