This is something I have been working on prior to coming to this class. I had been using the correct tools but picked up some new techniques from the videos and continued working up to what you see here. I wish I could show a higher resolution image.

The image is part of many from my Dad's old photo album. The original isn't horrible but my big goal was to remove the print texture reflection running through the image. Haven't figured that out yet. The texture is basically the detail, so I guess I would need to draw structured detail back in. I did do some with the dress and arm but faces and body parts would be tough. I guess a digitizing tablet would help.

I decided to add the darkened edges to add the 'old' back into the photo which became too new. I also left the bluish tinge picked up from the original print rather than convert to greyscale. 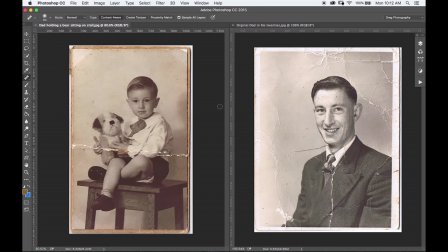