So a friend sugested a scene or something behind the "good-times" van. Tonight I added a door, shoes, boots and beers. Smoke too. 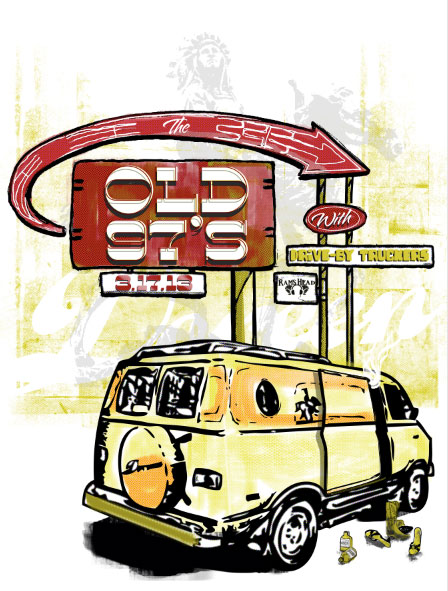 I NEED TO SIMPLIFY. I started out with getting the neccessary elements in place and then started to ad the dimensions where needed. I stripped colors and simplified the van. Probably needs more work, but it's late. Will have to hit it again tomorrow. — wait. 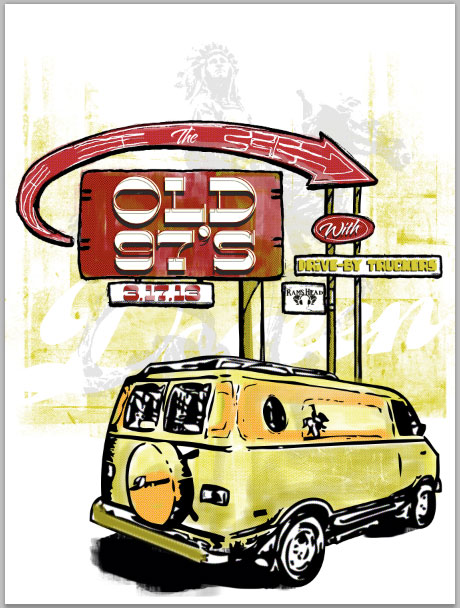 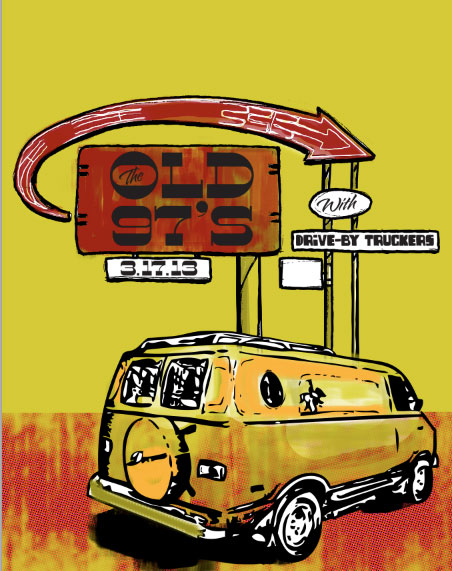 and then I started to combine/composite the sign and van together in .psd. trying to keep my colors relegated to as little as possible. 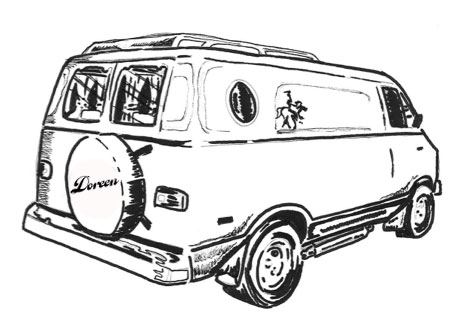 Then, after some study of other posters: I couldn't figure out how I wasn't achieving the "illustrated" stylings that I liked. So I ditched .ai and moved to a sharpie and .psd. With heavy cues to the 50's line-art as an influence: 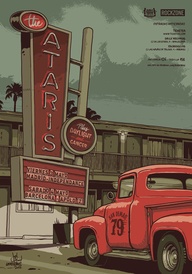 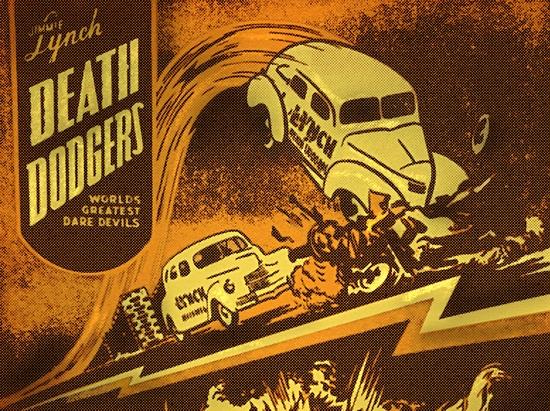 And so after I started drawing the van I was trying to figure out how I was going to give this thing some character and was in the same vein of the band's style. Then it occurec to me, "Where would a good-times van be going?" A seedy motel of course. So I started doing some reaserch on signage.

Then I started to pair the two together. — and it wasnt working. My first pass at it was: 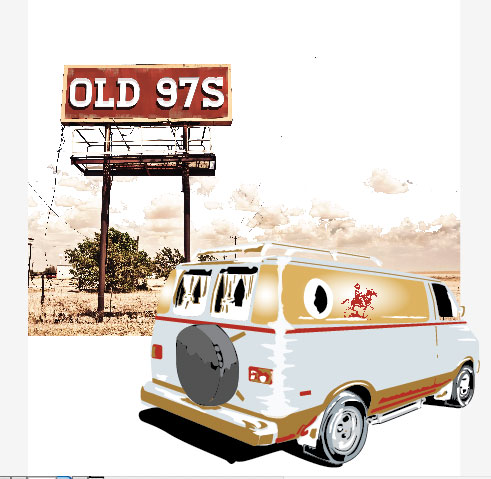 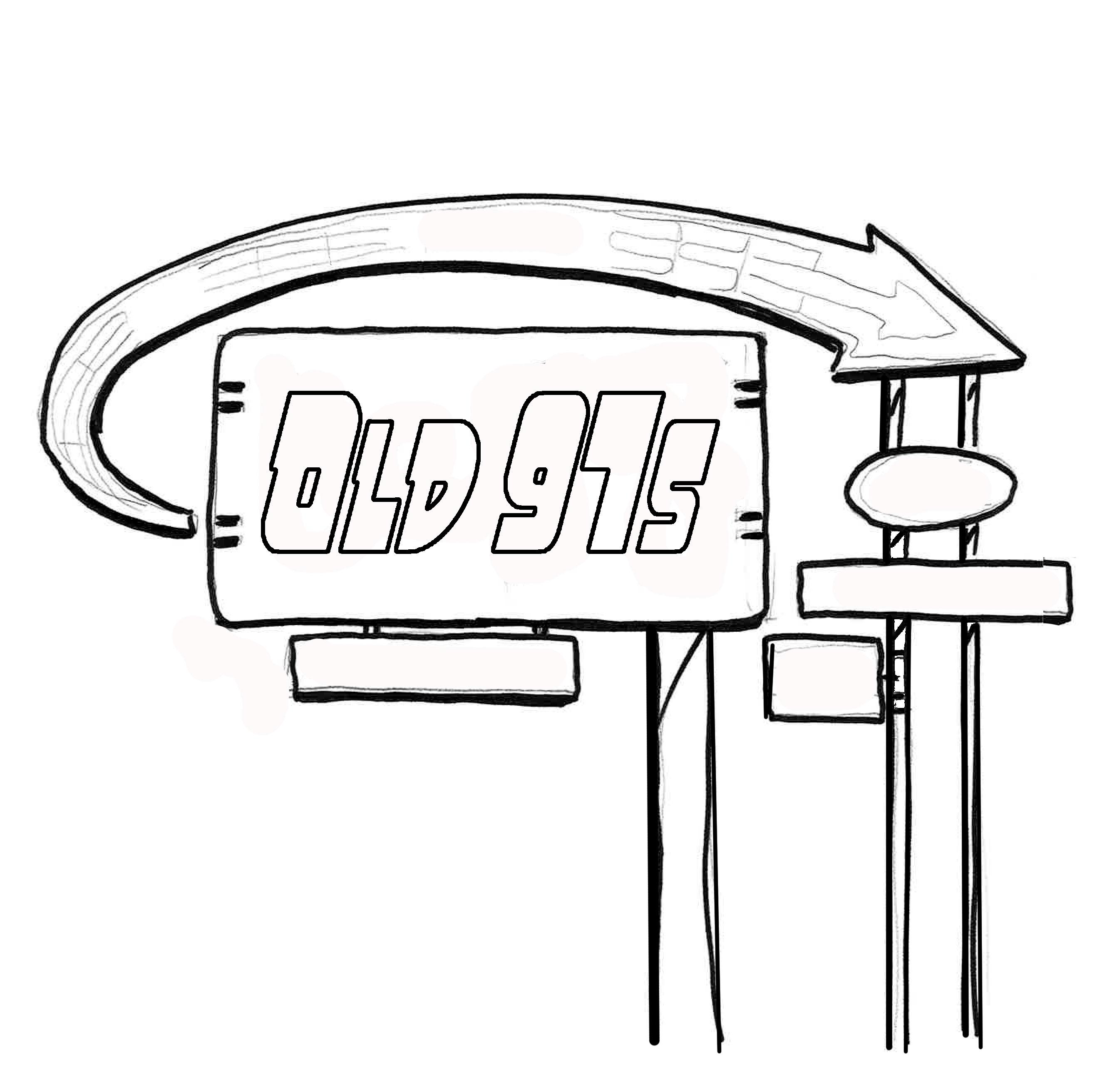 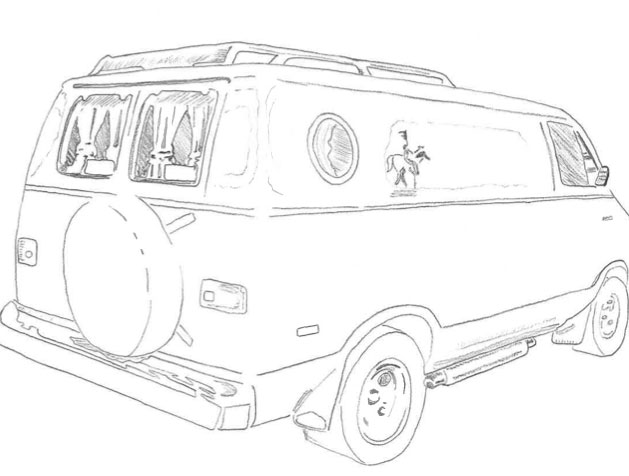 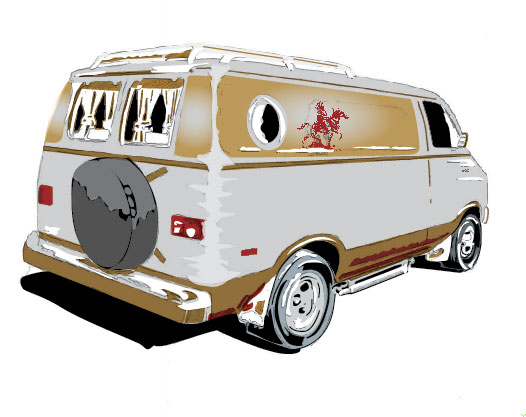 So... What can I say other than I have struggled with this a ton. After this first execution below, I wanted to take a new stab at it because I just wasnt feeling it and a buddy of mine liked the van I had from the original drawing. So I started re-drawing the van. 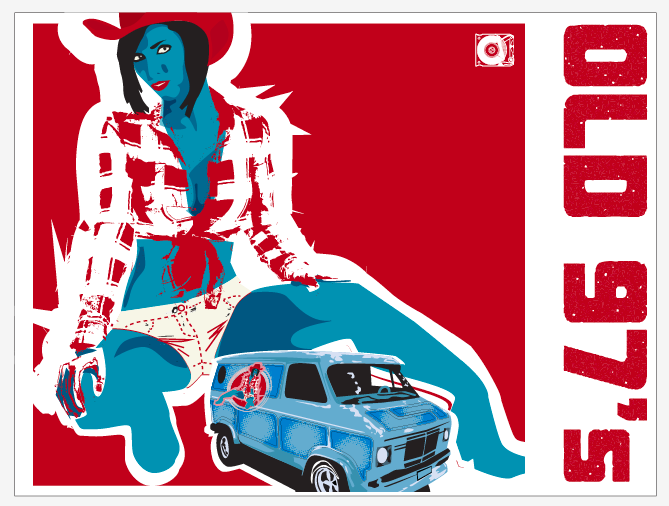 Loose sketch up of initial poster layout. I'm still working out type, tecture and composition. I found that once I had the van illustrated it felt very one dimensional. Another song, Called "Doreen" felt like it might have the answer. So I sketched up a character from an model and placed her. Colors I'm trying to keep to three with a tone of one or two. but would like to stay inside 4 colors for screen printing purposes. Still need to add "The Drive-by Truckers and the event locationa nd dates. This is still very far off in my opinion. Lot's of work to do.

The Old 97's are an alternative country band from Dallas, Texas. Formed in 1993, they have since released nine studio albums, two full extended plays, shared split duty on another, and have one live album.

So I discovered this band after I fell into the Alt/Country scene via the Avett Bros. and others. Good sound, entertaining lyrics that have deeper meanings and good writers with mellow hooks. So I was hooked. Only seen them once and had a great time.

I chose them becuse I didn't want to do a super popular or mainstream Indie band per/say, so here we are.

A little about myself:

I am a Sr. Art Director in Portland Maine. Been working design and Art Direction for almost 8yrs now. Went to school in Atlanta (Creative Circus) and undergrad in Virginia. Gig art is "to-be" the escape from annual reports and shitty B2B clients. You can see me here: http://www.niceguy-dave.com

I had a few ideas: The first, came to me when I was thinking about Texas. First thing that came to me were "fireflys". Now I have no idea if they have an abundance of fireflies in Texas but I had an idea with it so I ran... Se attched: 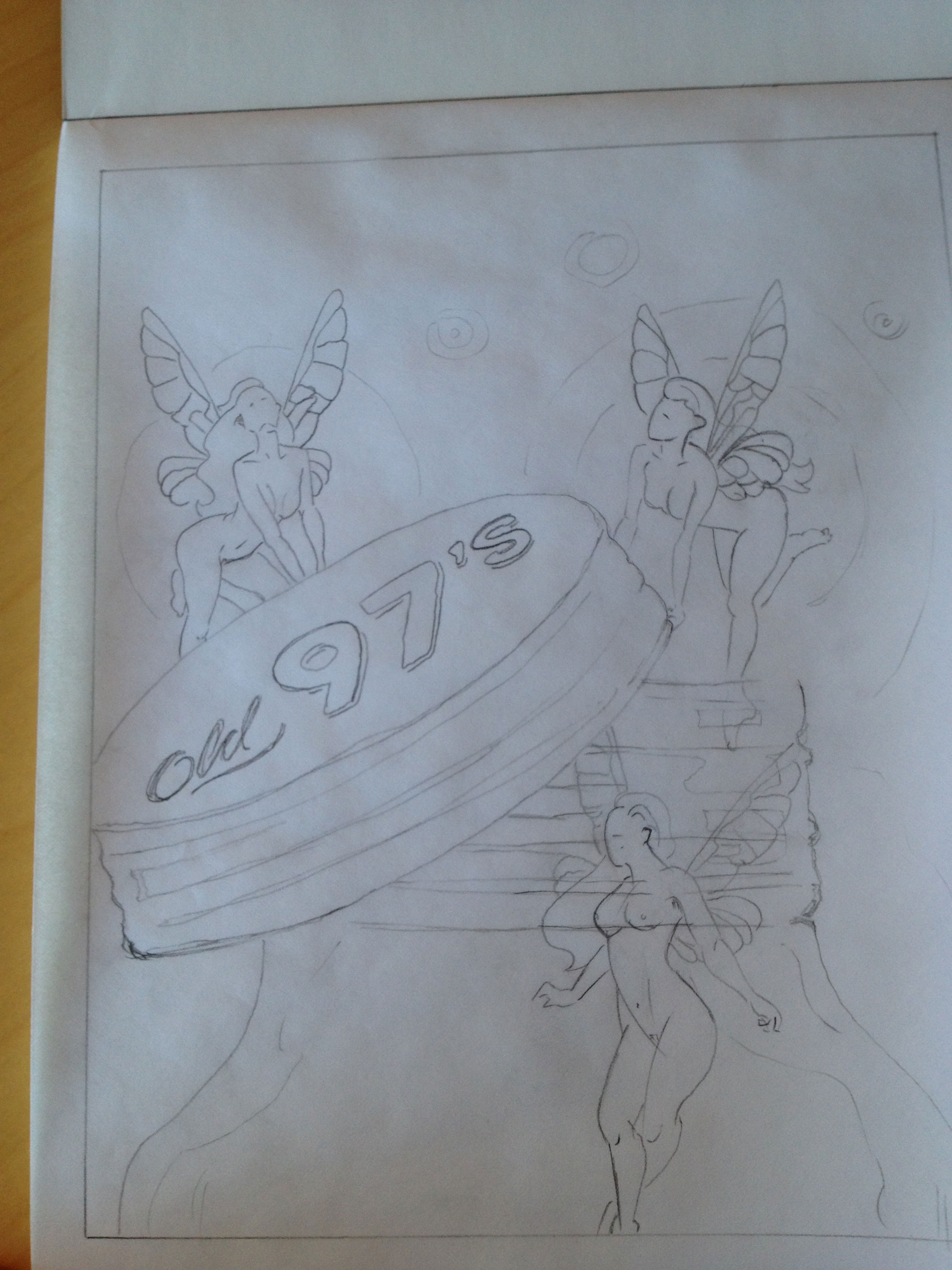 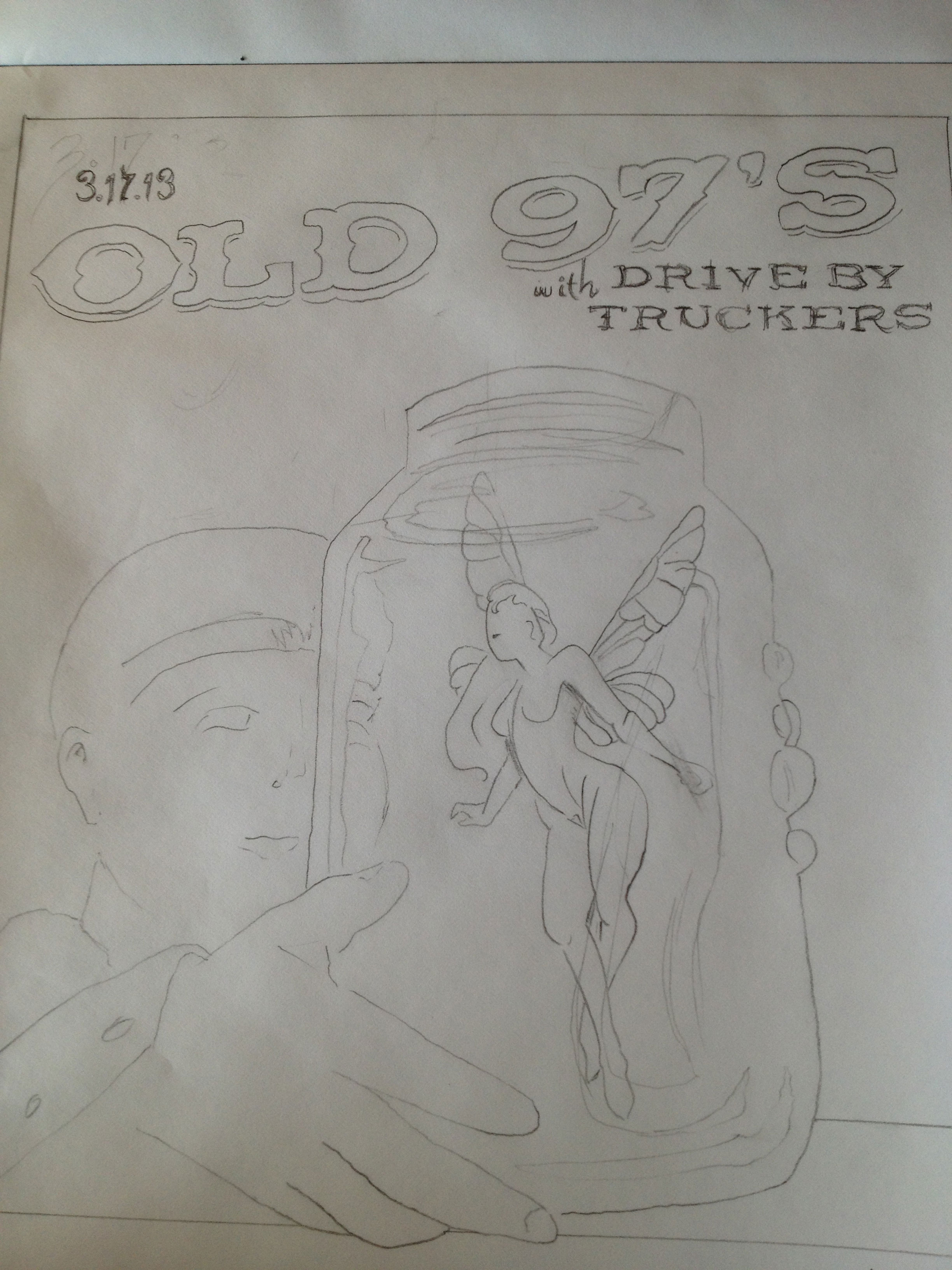 Next, I was thinking simply about the name. The image of the Old Spice bottle kept coming back to me: Simple idea, I know... but there could be something to a before/after concept. Before I was alone. ("Old 97's") After I was with a shit ton of girls or something like that... See attached: 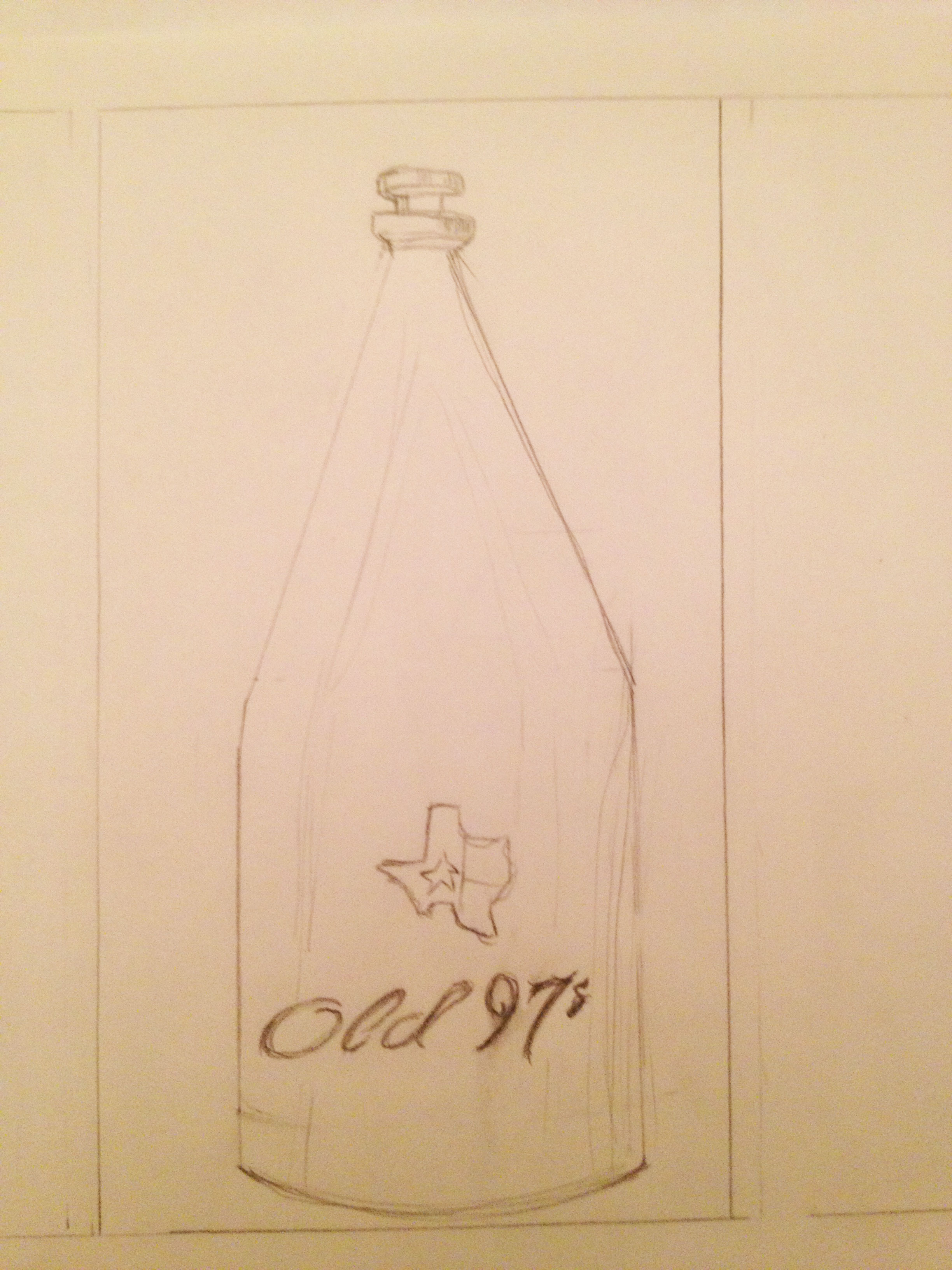 Finally, a song "Barrier Reef" make a refernce to a "Good-times Van" (Silver base with large purple, orange, and yellow stripes. Also featured smoked, Lexan bubble windows) sold by Ford in the mid 1970′s.  Not terribly original I guess, but it's something I thought I might have fun woring up...See attached: 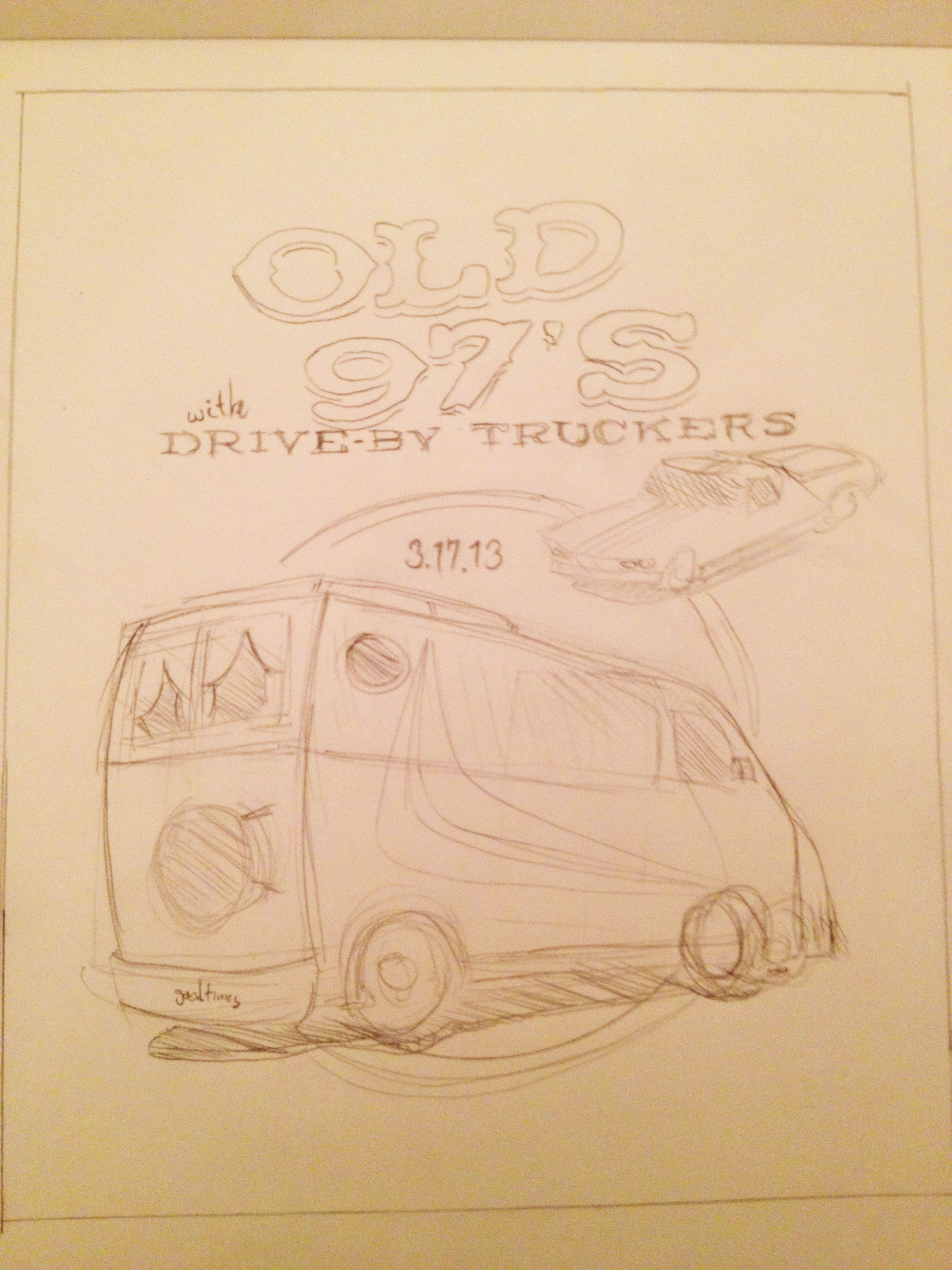