I felt that this exercise, along with the second part of it, really threw me right in the deep end. (In a good way) I love drawing characters, but they're mostly portraits or moving very slightly, so this first one really showed me I was at the right class, learning skills I really should use more as an illustrator and surface pattern designer.

I googled some pictures of dancer and came upon a fun one of Judy Garland swing dancing and drew from that. I had a hard time doing the sketches as simple as the teacher, Tom, does, but I'm learning!

I liked the initial first sketch (far left) but it felt too realistic, so I wanted to make the movement a little more exaggerated and whimsical, so I made the proportions a little weirder.

The last two sketches are the ones I drew from memory. I think my ultimate favorite sketch from all of them is the one mid-right - it's still whimsical but not over the top with the head proportion.

This exercise taught me to be more simple that I've been with my sketches and to see reference pictures through my own lense.

I've decided to only show you the cleaned up sketches (done with Illustrator) since the initial sketches were very weird and sketchy. The reference pictures were random google searches with "vintage swing dancing" as keywords and they're also very far from the final sketches. I'm happy about these funny characters and I had way more fun with these than I initially thought I would.

This exercise made me realize I really do like drawing big heads and big butts too! My favorite character from these is probably the male one with dark hair, he's so goofy!

I already had some ideas about where to go with this exercise, but I still tried to go with improvisation while sketching. I did feel like I made the pose as realistic and proportional as I could, unlike Tom did in the initial exercise. Because of the shape, I started to see this graceful woman inside a perfume bottle. I started to imagine the image being a perfume commercial and made her stereotypically naked with a see-through cloth around her. More on the perfume bottle lady in the bonus project!

I did two sketches initially just on pen and paper and thought she also deserves a cleaned up sketch version on Illustrator.

This exercise taught me not to be afraid of cramped spaces and even nakedness! I think after this exercise I'll even prefer my characters in the nude since you don't have to think about how the clothes fall or match or anything related to those damn clothes!

I really thought I'd hate this exercise, but in the end, it was really quick and fun! I did not have an idea in mind, I just started to cut from the feet (my go-to starting point apparently when it comes to cut-outs) and went with random ideas for the poses. As you can see, the proportions are way off and weird, but I sort of don't care! After seeing my cut out people I immediately saw a Charlie's Angels inspired fight scene going on, so that what I hope you'll see in the layout as well. I did not intend on making some sort of scene, but I wanted them to be cohesive somehow and through this scene I found the cohesiveness.

This exercise taught me not to be afraid of the scissors! I'm happy with this kick-ass result. I think I'll use this technique someday for random ideas.

Just as the lady in the perfume bottle, I already had an idea in mind with this one. I thought the cone would at first be really little but for interest, I made the initial object maybe just unrealistic instead of making it too big or too small. To compensate for the unsatisfying choice of object, I made the sunglasses huge, again made her body have a huge head, small body, long arms, a big butt, and a long tongue instead. I'm not a 100% happy about the sketch and how it related to the exercise given, but I just somehow wanted to make this ice cream licking weirdo of a woman. More on her also in the bonus project.

This exercise taught me that exaggeration really does make things interesting. I might come back to this exercise again privately to make something that's more like what is described in the original exercise, but for now, this will do.

For the bonus round, I wanted to complete both the perfume bottle woman and the ice cream on the beach woman. (I'll take suggestions for better names, hah!)

First of all, I tip my hat for anyone who works with Photoshop on all of their illustrations, but I completed these completely with my longtime trusty work pal, Illustrator. I like it when I have vectors that I can modify for other things later on.

As mentioned before, I immediately saw this woman inside a perfume bottle when I created the first sketch and wanted to make an illustration with her inside a retro perfume bottle with something cheesy written in French. Once I saw this idea in my head, I couldn't let go of it and went for it. The textures and brushes I used for the illustration are my own, that I already have on file on my Illustrator, so I did make some shortcuts with the textures.

I'm really happy with this, it turned out even better than I imagined. She's graceful, elegant and beautiful and after figuring out the color palette for a long while it turned out great too. Sort of thinking of privately doing a male version to accompany her.

This exercise did teach me to keep things flat for extra interest, though I did have to shade her body a little to make the limbs and body parts stand out.

For the second sketch, I wanted to complete, I decided to use textures differently and make the scene more alive than in the first one.

As I said before, this woman with her ice cream and long tongue, was not 100% the exercise, but overall I'm happy with the completed illustration. It'd be interesting to find a message to go along with this illustration and make her a poster or something later on. I'm hoping this illustration has exaggerated elements enough to make her special.

Again, I completed this illustration with Illustrator with my self-made textures and brushes that I have in my archives.

I absolutely loved doing this class!

I was afraid it would lose my illustration identity, so to speak, or that I would mimic too much of Tom's style, but I think this even showed me how to enhance my own style with the exaggeration and in a way, I even found my way back to my roots as an illustrator. These days when I work with pieces and prints for the gift wrap and greetings industry, I make a lot of "mainstream" work that loses my style as an illustrator, but this showed me that I still have a weird side that I can show off in personal pieces.

Thank you so much for the class, Tom, it gave me a lot of newfound confidence, techniques, and ideas! 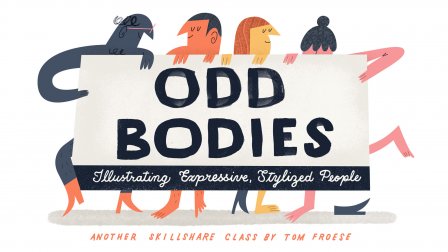