In order to prepare my mind to create the idea for my project I will make a list of my interests (past or present). This will allow me to base my project on something I already enjoy, am knowledgable about, and interested in. So in no order at all . . .

Lord of the Rings

What could my character's tagline be?

What Describes their role in life when the story begins?

What badge or stigma do they carry?

What event or complication in their life could make reader sympathize with them?

Fostered to and ally of a different race she is treated as a burden and an outcast by her foster family.

What desirable skills + admirable qualities could they possess?

What is their social standing?

What does the people they choose as their friends say about their values?

Dislikes: Injustice, the creatures that kill her family, her foster family and their house, hand to hand combat, cruelty, ignorance, prejudice, laziness

Extra Credit: think about what contrasting obstacle your character can face:

SUMMARY: At a musical match, King Midas disagreed with the river-god Tmolus’ choice for the winner.

Tmolus then cursed Midas with a pair of donkey ears for speaking out against him. Midas hid his new ears under a hat and the only other who know of them was his barber - who Midas threatened with death if he ever told anyone.

But the barber couldn’t keep it to himself. He dug a hole in a riverbank and whispered: “king Midas has donkey ears!” He covered the hole and left. However a reed sprouted from the soil and whispered Midas’ secret to the world.

SUMMARY: Said to have a heart unfazed by love and the desire to marry, Athene rejected romance. One day when Hephaestus (god of fire and metalwork) made a pass at her and Athene turned him away, a baby was born from the earth.

Athene took the child as her own, naming him Erichthonius. She sealed the baby in a chest and sent him off to life with Agraulos, Pandrosos and Herse. When they looked inside the chest, they saw Erichthonius as half-serpent, and fell to their deaths.

ASCALAPHUS - Gardener of the orchards of Hades, turned: screech-owl

SUMMARY: Ascalaphus told the gods that Persephone (who had been abducted by Hades in the name of love) had eaten a pomegranate while in the Underworld. This violated her release from Hades and forced her into becoming the Queen of Tartarus.

Ascalaphus was buried beneath a rock as punishment for tattle-telling by Persephone’s mother, Demeter, the goddess of the harvest.

Following his rescue by Hercules, Persephone turned Ascalaphus into a screech-owl. He became an “evil omen” and the bird of Hades.

WHAT INTERESTS AND INTRIGUES ME THAT I COULD ADD TO MY MYTHS:

Dee is a 11 year old Oakshroom girl from Fangthron Forest (a vast magical forest ruled by five noble houses) who is faced with exile from her foster home, and  a journey through dangerous territory to a home controlled by enemy forces.

Along side Thruk, a friendly Glyphbear, Dee has to navigate the dangers of Fangthorn Forest, which is filled with enemy soldiers, misleading sprites, and dangerous inhabitants to ultimately reach her home and rally the survivors of her destroyed kingdom.

WHAT COULD MY CHARACTER’S TAGLINE BE?

Tagline: “The quiet one”

WHAT DESCRIBES THEIR ROLE IN LIFE WHEN THE STORY BEGINS?

Dee is the only daughter of the noble house of Oakshroom. She is being fostered and trained as a page at the castle of house Kilcrakin. As a member of a different race and house she is treated as an outsider at the castle, and considered weak and strange by her colleagues.

WHAT BADGE OR STIGMA DO THEY CARRY?

Dee carries the stigma of being an outsider as well as a strange and dangerous due to her innate magical abilities and quiet nature.

WHAT EVENT OR COMPLICATION IN THEIR LIFE COULD MAKE READERS SYMPATHIZE WITH THEM?

She is treated with neglect by her elders and bullied by the other pages. Shortly after the story begins she loses her father and finds out that her house has fallen into enemy hands.

WHAT DESIRABLE SKILLS AND ADMIRABLE QUALITIES COULD THEY POSSES?

WHAT IS THEIR SOCIAL STANDING? WHAT DOES THE PEOPLE THEY CHOOSE AS THEIR FRIENDS SAY ABOUT THEM?

When the story begins, all of Dee’s friends are either books, plants or animals. This tells you that she does not feel comfortable, and does not to other the sentient beings around her.

Dislikes: Injustice, the creatures that kill her family, her foster family and their house, hand to hand combat, cruelty, ignorance, prejudice, laziness

low self-esteem/confidence, shy, timid: Since her first day of her training at house Kilcrakin she has been abused and mistreated. Gentle by nature, this has caused her to retreat into herself and cut herself off from the sentient world. She has developed a low self-esteem from the constant reassurance from the other pages that she is in fact worthless.

reliable, honest, hardworking, skilled, intelligent, nurturing, creative, resourceful, diligent, independent, compassionate, trustworthy, thoughtful: Despite this abuse, having been raised by her parents for the first seven years of her life, Dee was deeply instilled with the characteristics and values of house Oakshroom.

WHAT DRIVES YOUR CHARACTER?

A need to love and be loved by a family.

WHAT DO THEY DESIRE THAT SPEAKS TO A CORE NEED?

They desires to return home and search for anyone from her family that may have survived the attack on her house. She wants to be with people who love and accept her.

HOW CAN THEIR DRIVE OR DESIRE BE AT STAKE?

Her desire is at stake in two ways, first her home is miles away and on the other side of extremely dangerous territory. Second, the fate of her family and what she will find when she does return home is uncertain at best.

WHAT CAN HAPPEN TO YOUR CHARACTER THAT GETS IN THEIR WAY OF GETTING WHAT THEY DESIRE?

Countless dangerous and misdirection await her on the journey home, but her most formidable obstacle will be the self-doubt she learned at castle Kilcrakin.

Here's a drawing I did of Dee going about her duties in the castle:

Here's my first attempt at the Ottewts (haha let me know if anyone has a better name for the otter-newts):

Do or do not. There is no try. 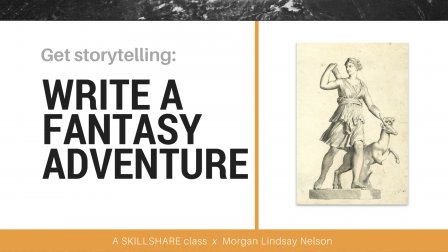