No strings on me

Three chosen objects are: Ukulele, sea shell, and ornamental jar. Because everyone has a Ukulele, right? Looking forward to developing these very different objects.

Only I don't have access to a light-box, so improvised by using grease-proof paper, over my original sketch. Because It's see-through. Once happy with the final picture I use the grease-proof paper to transfer onto my watercolour paper. See this link for how.

My ornamental jar has morphed into a nautical theme. Because the lid initially looked like barnacles on a turtle shell. When I returned turtle to the flat base though, it suddenly looked stranded - flippers in the air with nowhere to go. So octopus-like tentacles emerged, for all-terrain access.

I was tempted to turn the embellishments into barnacles, but wanted to preserve the ornamental nature of the jar. I will work on colouring next.

Today wasn't a good day for painting my nautical jar, as there were too many interruptions. So explored the idea with my ukulele, instead. The metal in the fret-board, became a gauntlet on the hand, no longer calling the shots. Broken strings, now wielding the plectrum!

I almost considered ditching the ukulele, as I was struggling to find places for appendages. When I thought hard about what a ukulele would want to haunt someone for, I realised it's strings are always being pulled by someone else's hand. OK, I can run with that - or rather, ukulele will!

Finalised the idea for my seashell. This was tricky to find a way in. As it's shape didn't lend itself to adding appendages and faces. Nor was it in the "tool" category either, so why return to haunt someone? I was regretting my initial choice, but ended up staring at it until an animal shape, emerged. I thought it suited a Puffin, pretty well. Now I just have to paint my sketches.

When initially looking for ways to change my shell, I searched for "barnacle scrapers", and found this vivid colour scheme. I knew I wanted to incorporate it into my shell somehow. So it became inspiration for colouring my puffin-shell.

I've used water colour pencils, because my paints were old and not coming out of the tube properly. Even though I was changing the shell into a puffin-like shape, I wanted to maintain as much of the shell structure as possible. Which provided a fun challenge for the head. I used minimal black pen to outline some areas, the watercolour didn't define very well.

I wanted to start with the shell, because it was my least favourite. But I ended up loving how all the contrasting spirals, dispersed the colours. Think I will tackle my turtle-jar next.

Finally coloured my turtle-jar, after much drama. By accident I used the back of the watercolour paper, for the puffin-shell. It was smooth and less absorbent. When using the front of the paper for my turtle though, it sucked up a lot of water and dispersed the pigment of my watercolour pencils. So I had to start all over again. The above, is my second attempt.

Let this be a lesson to anyone planning to used watercolour pencils. Don't use the absorbent side of the paper, which is perfect for paints. Pencils on the other hand, don't need much water to activate the pigment. Glad I stumbled upon the best side of the paper to use, as it made life so much easier! Last attempt, will by my ukulele.

Finished my final whimsical creature. I tried making some wood-grain marks, with the pencil, in the centre of the ukulele's face. I had fun trying to find the right colour mix, for an arm gauntlet, and the ukulele face. Just added some highlights in the wood-grain.

I even did a photoshop of them as a group. Fun to see them together!

So that wraps up my project, which took a little longer than I thought. It probably would have went a lot quicker, if I had a light-box. But still happy with the end results. 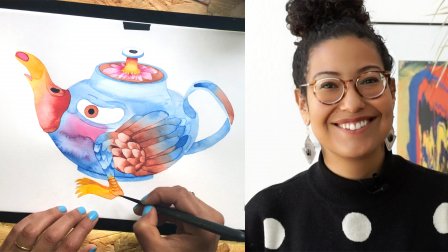