I'm super stoked about this class! Last year I've been so inspired by all the lettering artists out there but still a bit unsure about my own personal style of lettering.

For me this is a great push to acknowledge my typical handwriting, close to what I would do without trying too much, but still getting it to a next level. To start out, I selected three of my existing works from last year in which I think I used lettering in my own way without copying others. I'd love to hear what you guys think of it.

Meanwhile, I'm finding every spare moment to get on with the practice sheets and I'll be adding the final project soon!

Thanks for the classes Ana! Loved all of them and this one too!

I've done two alphabets now and played with the colors. One is fiery and the other galaxy. I discovered I not only like to put ombre effect within a letter but also within the letter group!

Then I did an editorial illustration (a bunch), in which the letters found their way. I love how they look once they're scanned. The handwriting is close to my own when I write really fast, but then 'made better'. From that lesson I developed this rounded calligraphy type, and the block letter, and one additional 'personal font' that's not in these illustrations. Right now I'm working on a quote, but it's going though some rounds of thumbnail sketching and color picking and detail practice... And simultaniously I've started the 'real life' challenge and I'm working on some 'have a great summer' - cards for the students at the high school where I teach.

What do you think of these fonts?

Here's my quote! Except it isn't a quote, it's my personal motto.

I've struggled with this one. The letters were quick in place, but I improvised with the background and embellishments. I think I overdid it multiple times. First the gold cloud. It made the green text dissapear. I then had to add outlines to the 'happy place'. Then I did gold veines in the leaves, to pull them closer to the gold cloud and to make them less massive. This lead to 'ART' not being clearly visible anymore. So, more black outlines there, and another layer of watercolor to intensify the orange and magenta. Then, white outlines and shine to 'is my' to make that stand out more as well. What a journey! But in the end, I'm not dissapointed, I think it's going in the direction that suits the feeling in my heart when I think of my motto. Bright, exuberant, lush, exploding. I might do more versions of these words <3

Well and then finally! The personalized cards. I did two different sets.

I noticed that with the first couple I set the bar a bit lower on the embellishment part (just a textured watercolor circle), and also made it a bit easier to write the names by using a brush pen instead of watercolors. I didn't plan that intentionally, rather intuitively - but when I realised this, I wanted to challenge myself to the next level: all watercolor.

I soon had a new opportunity and I made another couple of personalised cards. I am quite satisfied with the colors and the illustrations of starfish, though I might have liked the letters more skinny, looking back. Well, I'll just keep my eyes peeled for another chance. As mentioned in the class, it's a great little project to practice your lettering like this! Thanks again Ana for making us do so many projects in one class and really getting ahead with our lettering! 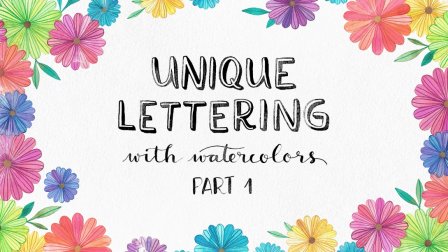