The project I'm working on for this class is one I actually began months ago: a new mobile game concept based on my app Brainbean.

I dropped the project a number of weeks ago to make room for other things, but I want to get back on it and actually finish it.

To do that I'm going to set some type of daily routine that will help me make small, incrimental progress on the concept so I don't get overwhelmed. Here's my plan:

I'll be posting regularly here, so if you're interested in watching my progress (and giving me feedback as I go) keep an eye out here.

The concept for this app will be built off of my latest app, Brainbean.

Brainbean is iPad only, but I want a way to bring it over to iPhone (which has a smaller screen). I first thought about taking each of the individual games from Brainbean and making them into their own, separate apps for iPhone... 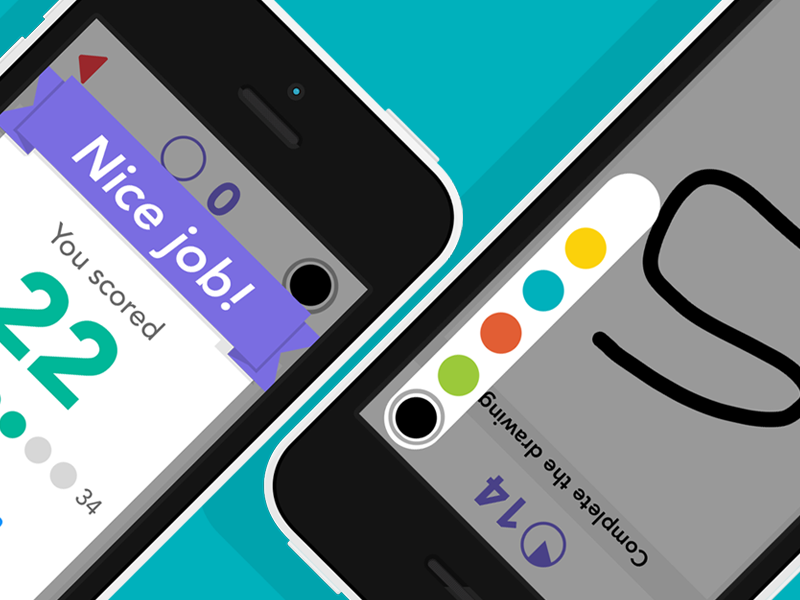 Now I have a new idea to create a challenge game where players are presented with a bunch of different types of creative challenges, in random order, and the goal is to see how many you can complete in 60 seconds.

I'm going to call it Brainbean Remix (or Remix for short).

More details to come as I make progress...

I had some extra time over the weekend to work on this. In total I spent about 30 minutes during my lunch hour on Friday, two to three hours on Saturday, and one hour on Sunday.

Friday I sketched some concepts for the main menu in the app, I'm struggling to find a good approach for it, but I know the idea will evolve itself as I work. 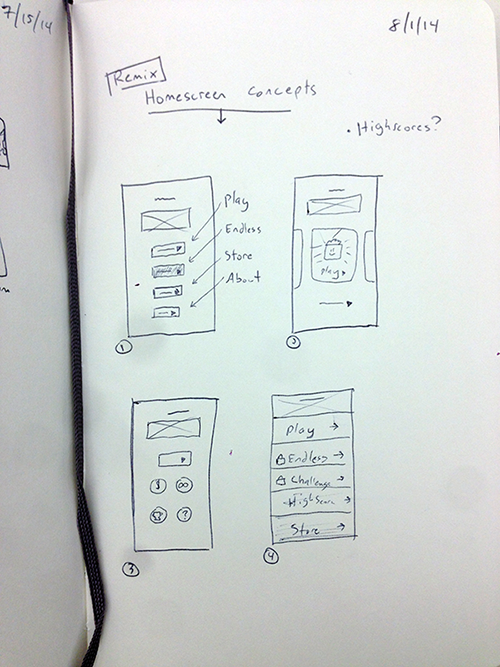 During the weekend hours I was able to take my previous app (Brainbean) and conceptualize how it would look on the smaller screen of the iPhone. Here's what I was able to come up with during that time: 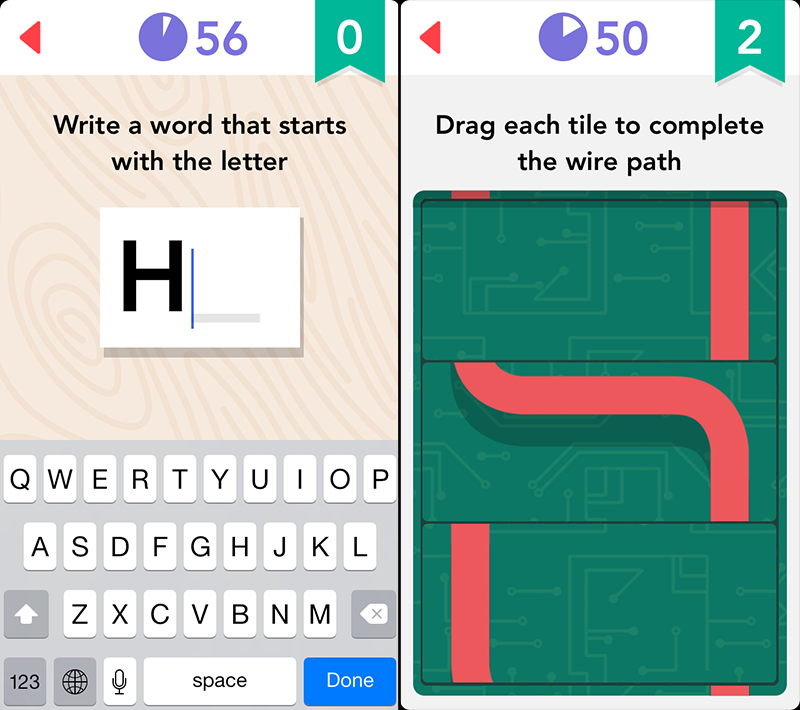 Looking forward to spending a few more minutes on this tonight, hopefully getting an extra hour in if I can squeeze it.

I've been seriously slacking on this the last two or three days.

I had some time to work on programming a few of the mini games within the app — and decided that 30 seconds was much more fun than a full 60 seconds — but feeling stuck on the main menu and what additional features I could include in the app to generate revenue.

I have a planned vacation in one week, so I'd like to get as much done on this as I can before then. Expect a much bigger update in the next few days, as I dedicate a big chunk of this upcoming weekend to the project. :)

Some quick updates on progress: today I was able to dedicate a solid hour and 1/2 working on a fun feature of the app.

Whenever you complete a certain task, you'll either see a screen congratulating you on completing it, or a screen displaying some type of error/fail message. I've programmed the animation of what that will look like (apologies for the low-quality gif):

For that screen to work well, I wanted to create a series of custom icons. This is a pretty big task, as I want there to be a lot of random little fun icons for users to see. Here's what I've got so far: 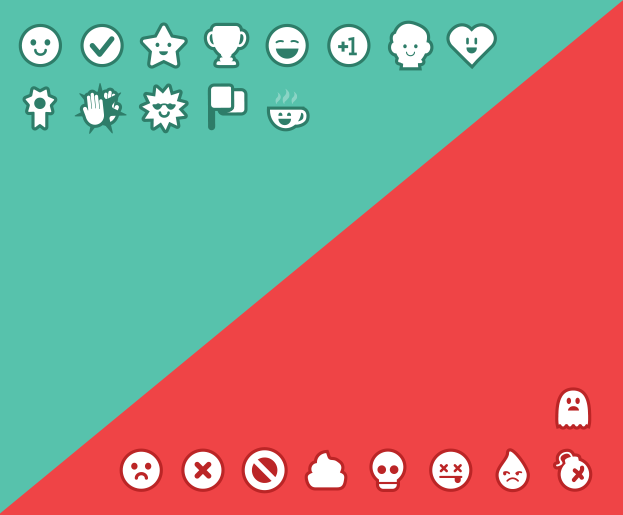 As you can tell: there's a lot that still needs to be done. But I'm happy with the direction this is going in, and a lot of these icons are turning out to be fun.

Still struggling with how to design the main screen, the game over screen, highscores, etc. So a lot of work in front of me, but I'm excited to see how this comes together.

My biggest problem right now is pursuing perfection. I have to keep reminding myself to have fun with this!

I've kept up with my goal the last few days: spending at least 30 minutes a day working on the project.

Yesterday I didn't do any designing or developing, but I did spend 30 minutes sitting down with my brother (founder of app development company TapFuze) to get his thoughts on the app and how it was coming along. He gave me some good praise and a few ideas for where to improve the concept.

Unfortunately I'm going on vacation all of next week, so there won't be many more updates for a bit. While I'm away I'm still planning to do some drawing/note taking on ideas for how to build out the app so when I'm back I can take those notes into action!

Back from vacation and diving right back into the work.

I've been catching up on day job work, updating my personal website, and trying to build out other projects, but I'm also making good progress on this project as well.

Today I was able to add a number of beautiful animations to the app, they really add to the character of it and make it a little more fun/friendly. Here's a short YouTube video of the progress I've made on the app so far: Brainbean Remix prototype on YouTube

I'm not happy about where the project is at a month into it. I find myself easily distracted and overwhelmed. I just want to get it done at this point.

I spent 30 minutes during my lunch hour at work yesterday sketching more ideas for the main menu, end screen, and a possible scoreboard for the app. I'll see if I can upload a picture of the sketches later.

Today I spent an hour updating some of the nerdy aspects of the app, and I feel like I'm heading in a good direction. After I make a few more adjustments to the code I think everything else will go along quickly and I can have this thing done in a few weeks.

The scope of the project keeps changing slightly, but I think where I'm at now is the best option (in order to get the app out the door). Rather than having players collect items or anything like that, I'm going to implement a public leaderboard where people can see where they place and try to get the high score. Players can also "challenge" their friends to see who can score more points in the app.

The only thing that is really standing in my way of progress is figuring out a way to make money from the app. I know I want it to be free, but if I don't make at least a little money from it then I won't be able to work on projects like this in the future. Indie developer problems!

I swear this project isn't dead!

I've been doing a lot of thinking and evaluating my career the past few days, and I'm not sure the direction this game was heading was where I wanted it to be. To be more accurate: it wasn't a good reflection of the type of work I wanted to be doing.

So I'm working on simplifying the design, I'm also leaning towards making the app completely free (with no in-app purchases) just to get it out the door so I can focus on other things that have popped up over the past few days. Including reworking some of my previous apps and helping the thousands of people who use them everyday. That's a big motivator to *quit* this project, but I'm going to stick with it a few more days just to see what comes of it.

Wow this is *almost* embarrassing. TWO YEARS after I set out on this project, I finally launched it.

So what got in the way? Other ideas. Trying to scale this idea too much. Moving to California to start working at Facebook. Writing a book. And so many other life changes.

But alas, two years after I started this project it has officially launched. Check out what it's become by downloading it in the iPhone App Store.

Or just watch the trailer I made for it: 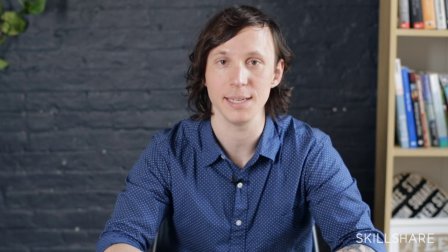