Belief and ritual. Many people set these as their foundation to a meaningful life. "Nafovanny" musically represented a visual idea I had about how belief and ritual are the foundation for all other experiences in life.

The music video would take place in a bare bones monastery. The monastery is an ancient, unchanging, and place. What does change are the people that come through the monastery. This building will be the only thing we see of the world. The only thing that would inform the viewers of a more modern world would be at the end.

The start of the video opens with a lone, female figure entering the monastery. It's a wide shot and not much detail is given about the figure. It scales down a bit to show more detail of the figure and shows her getting ready to perform some sort of meditating ritual. She is dressed in simple clothing that have basic colors.  Her back is to the camera as she seats herself on a rug and crosses her legs. Then the camera starts to slowly circle around her. We see her face. Her eyes are closed and she begins to stretch. She settles into meditating. 10 seconds into meditation there appears to be whisps of colored fog appearing around her head. Her hands move to a different position and the fog changes to a more solid fluid that is now dancing. She changes her hand postion again and it becomes more amplified. She does a final hand position and her space is illuminated with color. Almost like an aura. It is undulating, changing color, and constantly moving. She takes a slow deep breath, exhales, the aura reacting with her breath, and opens her eyes. When the viewer gazes into her eyes they find she is not human at all. She has circuits that can very be faintly seen glowing through her skin. Her eyes do look human but there is still a machine glow coming from her eyes. She smiles as the aura is still dancing about and the video ends. 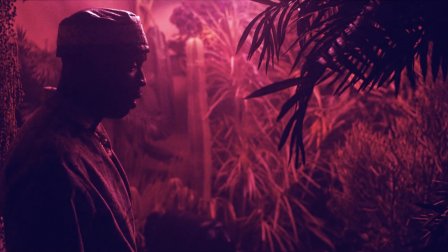