Now, I don't want anyone to worry about copying or being influenced because by and large, we are probably drawing from the same videos ..... there are going to be overlaps of content!

Anyway, Picasso said artists should steal and I think that emulation and copying is a really important aspect of improving and growing as an artist. Obviously you shouldn't make a career out of copying someone's style, but as a learning tool in order to create your own style, everyone copies from someone along the way!

It goes without saying that you have the most amount of time in this video, so it's normal for this image to have greater detail and more content, with each smaller time limit obviously looking more sparse and more "rushed". This is fine.

I really wanted to fill the space in this one, I spent most my time on the box in the top left, a really nice little framed section of the material I think. I made up the palm tree, don't forget to invent stuff and put in things that you just like to draw if there is room and time!

Also, as I've stated elsewhere, it turns out that skillshare doesnt actually allow very high video quality. However don't let this put you off, you've no time for immense detail!

This is a tough one, people whizz by so you'll have to rely a lot on memory and imagination. This is a great opportunity for your own style to shine through. Get down what you can, pick out sections you think would look great framed and keep the pen moving!

I'm not expecting anyone to have a lot of content for their 5 minutes sketch. I want people to really just go for it in this one, just make lines in vaguely human shapes and I think you'll be pleasantly surprised with your outcome. It doesn't matter if angles are correct or hands are drawn properly or even faces. Look are the plants, the people, the balloons, the atmosphere and have a nice sketch!


I look forward to your submissions, and happy sketching!

PS: I'm more than happy to answer any questions or elaborate on anything so either comment here or in the main community tab. 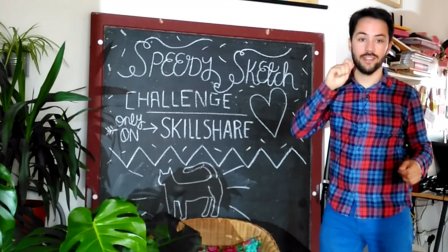