I run, from myself

From everything I know

Too much to bear

No space to grow

I need a way

A new path to walk

I embrace the dark

Chase the demons away

Keep within a minimum blow

In any way that I could

And through writing I glow

I'm safe to be me

I got this, I have

Keep on going, the end isn't so.

This is not what my intention was at first. I have written a lot of poetry but none like this. I just went with it. I had an argument in my head about what people will think or I was in "editor" mode but having done the meditation beforehand I was able to quieten those voices and just carry on until I felt satisfied I was done. I'm not sure if it even classes as poetry anymore , so many different types and ideas or guidance. I have this thing that I'm trying where I tell myself there are no rules. Just write what I have in my head and sort it out later. Sometimes the raw, 'messy' work is actually better than the 'edited' version so I'm trying to be as fluid as possible. I've blocked myself so many times and been unable to write anything as I put too much pressure on myself on how it should look, if people will like it, if I can even write anyway.. self doubt is a dangerous game and I won't play anymore. I'm taking everything seriously and really making an effort to have fun and remain proud of my progress along the way.

I found it relatively easy to write today as I had words bubbling away under the surface. Never before did I understand why meditation before writing was so important. I was able to flow so much easier and think more/criticise myself less.

Thank you for your helpful, subtle push to share the poem as I probably wouldn't have done. This is part of the growth and I would really like to keep learning. 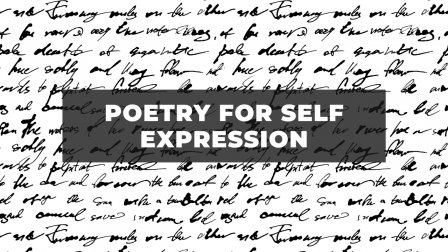 Poetry For Self Expression
Zachary Phillips