First off, Umber I want to thank you so much for this great class. I did not test the rough puff yet but the focaccia is already a hit.

It was my first project with yeast, as I am a confident cook but a rather intimidated baker. Started off a little bit twisted because I misread "2 tbsp of yeast" instead of "2tsp", ending up emptying two packs in the water. But it turned out perfectly. I chose to let rise overnight (in fact it rose from 5pm to 8am this morning) and you can see that the dough rose A LOT.

I was afraid the yeast would be an issue when I came at the cookie sheet/piano playing step. The dough was very bubbly and had some stickiness that I couldn't quite see on the video. But I kept on and added the toppings.

For my first focaccia, I chose portobello mushrooms, cherry tomatoes, red onions, dark olives, rosemary and parsley. I added pepper and 2 pinches of "Fleur de sel" (closest to kosher salt that I can get in France). As you mentionned, it really feels like painting a landscape and for the next one I will definitely try to give it some meaning.

I baked it, as mentionned at 425°F (220°C) with convection the first 20minutes then turned it around for the next 10 minutes but since it already had some brown edges I set the temperature at 200°C (392°F). I had no issue whatsoever to lift it off the baking tray once done.

The taste is amazing, so is the texture : crispy on the oustide and soft on the sinde, with those pockets of air. And I have so much! Depending on the bite, you get a whole range of flavours ! And the looks !!
I will definitely try it again, with a sweet version, and the regular amount of yeast. It is a very easy recipe and I could not be more thankful for the tips you give throughout the course ! 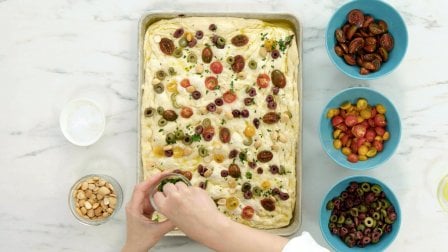