Hi Katia, Here is my class project with some additional pictures to show how the design evolved from the original to the final. So excited, it is my very first low content book. I made the flowers like doodles since it is a combination notes and sketch book. I hope you don't mind I did a notes and sketches book too.  It took me forever to decide on the colors and orientation of the pattern :)  I did several iterations of the design and decided on the purple and orange one.

First I did the black and white pattern and then vectorized it in illustrator with the image trace tool.

Then I made a pattern swatch in Illustrator. I rotated and scaled down the pattern. I also tried a different outline color like shown below, also keeping in mind you mentioned not to use a white background (forget which course of yours you mentioned that in).

Kind of boring, all the one color, so I tried more color variety by carefully snipping the paths in illustrator so I could color the flowers individually. Below is my color experiment. Lesson learned, next time I will draw on separate layers in Procreate and even export them separately so I don't have to snip the paths in Illustrator :)

Still not happy with the pattern, I decided to try a fill on the doodle flowers and enlarge the pattern a bit. I kept the same outline colors as above, just added the fill.

I really liked the fill, but I decided it was far too busy and the text on the cover would be hard to see without a color block or plate behind the text. I played around some more and decided not to make the pattern so uniform and ended up with this design below which is the final design I chose because I felt it had more visual interest.  I did add a solid color for the spine which turned out really nice because I measured it so it would line up with the indented bend on the cover when the book is opened.

It was so exciting to order it and get it in my hands!!!  I have been using the sketch pages to draft more cover designs because it is the perfect size to help visualize what the cover will actually look like size wise.

I used information I learned in your other classes to create the pattern. I used Procreate, Illustrator and Indesign to create the book. Before I uploaded it to KDP, I used Placeit to create this mockup below (along with a mug design I made) just to see what it would look like because I have trouble visualizing things in the flat digital space.

So this is a mockup from Placeit

Thanks Katia! Awesome course and you made it easy to follow. I am looking forward to trying the coloring book next :) 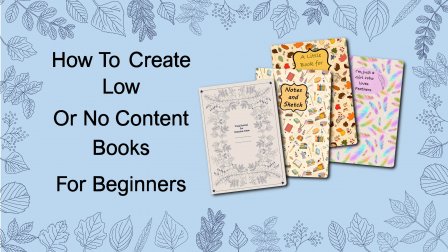