My editorial illustration (with sketches)

Using Emiliano’s sample story, I tried my hand at this project.

First, I sketched out a few ideas after reading through the piece. My brain tends to think a bit more literally than in abstract metaphors. I want to improve on that in the future.

Using my iPad, I quickly put some sketches together (it can be difficult if you’ve watched his process because those ideas are already in your head). I tried to empty it and pick out some key concepts. The first sketch is someone given a jetpack to fly to a bustling floating metropolis, only he’s tied down and will never reach there like having a degree and the knowledge but the debt and economy will never let you get there.

The second sketch below was using the same concept — the goal being out of reach except this time the mirage in the desert is the goal of the graduate, a promise that’s made to them but doesn’t actually exist. Maybe I’m a pessimist, but this felt more accurate to the story.

The third and fourth sketches dealt with the rebirth of the phoenix, the metaphorical second act. But in my head, the phoenix can’t be reborn into another phoenix like in the myth. To fit the article, we’re reborn into something that can never quite reach the potential we’re promised with more degrees. So the phoenix is reborn into a duck... just a lamer bird without the majesty and that feels funny.

To add to the phoenix rebirth, I could have tied the University of Phoenix logo into the background as the article talks a lot about for-profit schools being part of the issue with producing useless degrees and indenting students. This would have worked best in the last sketch with the duck coming out of the ashes as it would need more imagery to make it understandable why a duck is coming out of grey stuff (ash is hard for me to visualize drawing).

Whittling down the ideas, the jetpack was fun but did Ii wasn’t sure how easily it read. The diagram of the phoenix rebirth didn’t feel like a piece of art although it was the easiest read of the four. However, most editorial illustrations in bigger pubs seem to like more abstract concepts. The last illustration of the duck in the ashes with the U of Phoenix in fire in the background would have been my other choice but I kept questioning if people would understand the duck or the metaphor at all if the visual elements would put the story together easily.

So I went with the mirage in the dessert.

You can see in the sketch, I just had a hand reaching out towards the mirage, but after attempting that, I felt like it could have been anyone and it didn’t come back to the concept of the second act. I changed it to the man crawling in his business suit towards the mirage while leaving his graduation cap and degree behind him as it was useless baggage.

I‘m not sure if the mirage looked more like a true oasis in the end but I tried to make it look ephemeral with a cloudy haze and multiplying the layer so you can see through it but I still wasn’t sure.

Overall, I think I could have improved it but I will keep trying and hopefully improve. 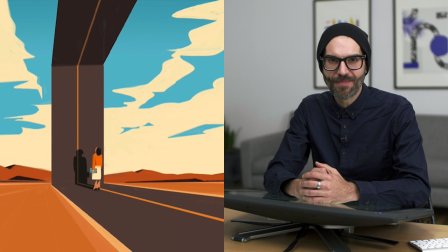 The Art of Illustration: Find, Develop and Express Your Creative Voice
Emiliano Ponzi