My attempt at Bruschetta

K, so got all the ingredients ready first. Those eagle-eyed among you will notice the absence of onion. PANIC NOT! They're just out of shot to the left there. I went with red onion for a little variety!

Check out my ingredients!

OK, so I used a REALLY small baguette for my first attempt, didn't wanna go TOO nuts. Sliced it at kind of an angle to get longer bits so I could really load those babies up!

Ready for toastin' complete with a brush of olive oil, good tip that one...

So while that was in the oven catching a tan, I prepped the ingredients and mixed the salsa! Toms were a bit on the ripe side so kinda spat everywhere but hey, all part of the fun, right? I think I added like half a Jalapeño chilli which almost didn't register so I'd say if you're using that variety, go 'full chilli'. If you're using birds-eye chillis, those things are the devil and you should probably only just SHOW it to the salsa instead of actually throwing any in. I also used fresh basil instead of parsley (as the Mrs doesn't do parsley). Smells amazing.

So final touches were to whip out a posh chuck of wood 'a la Jamie Oliver' and spoon on the salsa! Also (coz I'm a jerk) I drizzled some balsamic vinegar over the top. 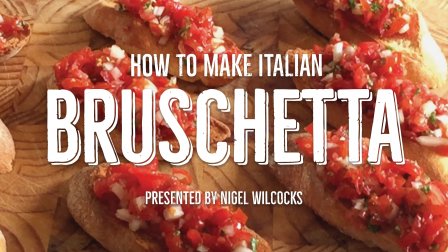