When I first started painting and experimenting with art a couple of years ago I did not have any idea what sketchbooks were. I thought that the people who drew in sketchbooks were just not able to purchase blocks of more expensive watercolor paper.  When I finally realized the purpose of sketchbooks I became obsessed with them. Every time someone in a class mentioned the sketchbook they liked I would buy one. So I have a lot of sketchbooks but I am afraid to use them as I think I am not good enough and I do not want to ruin them.

So my favorite sketchbooks are the cheapest ones, Bienfang Mixed Media by Speedball.  They are very inexpensive and they handle everything I have tried on them (except for wet in wet watercolor). I just love experimenting in them.

I also love my handmade sketchbooks. I have made a few and Lana Novko, aka Calico Brush, made me the most beautiful book (with the watercolor lemon).

Note: Gouache knight and castle are copied from the beautiful book Imagination a Forest.

Finally, I have my commercial sketchbooks.  Someday I might feel more comfortable experimenting but right now I feel that I need to try to be perfect when I paint in these.

Copying Anna's projects while watching the videos helped me gain confidence in using copic markers before starting my final project.

For my final project I did a copic marker sketch of the carousel rhino at the San Diego Safari Park zoo.  I did the rhino as I wanted to practice more blending with grays and I also love rhinos. I plan on sketching the red panda carousel animal next but he is hidden among other animals so he will be more difficult. 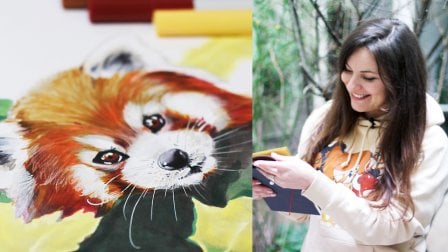 Recharge Your Creativity: 5 Techniques to Grow Your Sketching Skills with Markers
Anna Sokolova