Here are the main POD sites that I use.

I've been playing around with Society6 and Redbubble for about a year now but only recently started to take them seriously after logging in one day a few months ago to Society6 to see that some of my work had actually sold. Since November I've been featured a few times on Redbubble and I make the most sales on that site. My experience with Redbubble so far has been awesome. I've been as active as I possibly can in the Redbubble community and I think that really helps. I've learned that to make any money on the POD sites you have to be active in their communities by networking with other artists. The more you engage, the more visible you become. After making enough money to cover down on my electric bill last month I now see PODS as a viable source of income.

Thanks Nic for a great class. 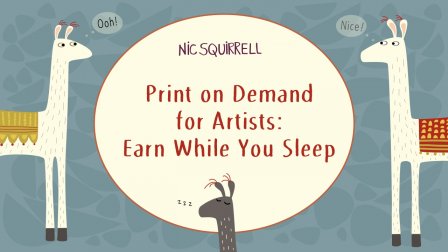 Print on Demand for Artists: Earn While You Sleep
Nic Squirrell