My Mother's a Serial Killer

Hello, all! My name is Natalia, and I recently got into short horror stories called 'creepypastas.' I like to scare myself by reading creepypastas such as 'My Father Punished Me When I Talked to Ghosts,' 'Annie96 is Typing,' and 'My Friend is a Plastic Surgery Monster.' Anyway, since I liked the genre so much, I decided that I wanted to write my own . . . Enjoy! ^^

I've been blind ever since I turned two years old, but other than that, I was the prim little angel that everyone wanted me to be. Short, ocean blue hair cut in a pretty bob, and innocent, round, green eyes. Onee-san (my older sister) always told me that I looked like a life-size doll when she would brush my hair or tell me a bedtime story, and I kinda feel like one. Onee-san wasn't her real name, of course. Her real name was Sachiko Adachi. Mine was Nao.

Since I was blind, I usually had to feel around the house to figure out where I wanted to go, but by the time I turned four, I had pretty much memorized the layout of the house. I didn't go out much, since Mommy wanted to keep me at home, so Onee-san would always help me with learning things.

As a little girl of six years old, I was expected to keep still and stay quiet. I had both parts down, which prompted several of Mommy's friends to tell her that I was such a well-behaved child and asked her secret. Mommy told them that she had no secret, and I could always hear their shocked gasps.

One day when Onee-san was brushing my hair, I reached out and tried to feel out Onee-san's face, reminding myself of what her features looked like. She was more comfortable with it than Mommy was,

I asked her where Daddy was, and her mood seemed to droop a little.

"Daddy? Mom sent him away when you were just a baby. He's not allowed to visit us at all, and Mom's never said why. She just changes the subject when I ask."

I sat down, my six year-old mind mulling over this new information and tugging it apart. Why couldn't I see Daddy? What could be wrong with him that Mommy didn't want me to know about?

It puzzled me, and I hated to be puzzled.

I heard Mommy calling for Onee-san, and she told me:

"Stay here. I'll be right back, and we'll finish getting you dressed up for tonight. Okay?"

I nodded, and I heard her running footsteps as she went to Mommy. There was silence for a little bit as I waited patiently for Onee-san to come back. But . . . a strange feeling came across me, one that I had never felt before. It was as if spiders were crawling all over me, taking the time to make sure I felt every movement across my skin. Cold shivers raced down my spine, and I swallowed hard. My throat was dry all of a sudden, and my lips moved, but no sound came out. A sudden itch started to bother me, and I scratched my neck while my mind raced.

What was going on?

A loud scream shattered through the large silence, making me jump. It sounded like Onee-san, but where was she? And why was she screaming? What happened? I scrambled to my feet, my heartbeats echoing in my ears and drowning out anything else as I ran looking for Onee-san.

Why couldn't I think properly? What was wrong?

Endless questions circled around in my head, and I felt sick inside.

I heard another muffled voice that got louder and louder, until I was hugged by a pair of arms suddenly. I squirmed around like a fish out of water, twisting and wriggling, not knowing what was going on. I was in the dark. Literally. I could smell a horrible, purely evil stench coming from Mommy for some reason, and that scared me further.

"Shh, Nao, it's alright now," I heard Mommy's familiar voice say to me.

I calmed down some, but I was still crying. I felt around Mommy's familiar figure while demanding to know where Onee-san was.

Why are some places of Mommy wet? I wondered helplessly. What's going on?!

I scratched at my neck relentlessly, and I couldn't stop.

"Nao, your sister . . . she's gone. She's not coming back," Mommy said softly. Gently. It contrasted sharply with her smell. Why did she smell like that? Why was Onee-san gone?

And what did she mean by gone, anyway?

My questions were unanswered, and from then on, Mommy never spoke of Onee-san again. Mommy took care of me, filling in for her, but it wasn't the same. I mean, Mommy hadn't really been in my life until now. So, naturally, it took me quite a while to get used to my new routines.

She had been too nice to me, even though I wasn't the sister she had probably imagined. I just wished she would come back, even for a little, just to tell me what had happened and that everything would be okay. I might have hoped for that to happen, but deep down I knew that it wouldn't happen, even if I didn't know why. I just had that feeling, deep down in my gut.

I asked Mommy once or twice about what happened to Onee-san, but she never answered. Maybe it was too much for me to understand. Or maybe she just couldn't talk about it. When that happened, I never questioned her about it again.

Sometimes I would walk around the house, and whenever I came close to a certain area, I would get the feeling that I had gotten before Onee-san had screamed, and it wouldn't go away until I walked somewhere else. And . . . my itch would come back, taking hours to go away. Naturally, my curiosity was piqued, and one day I couldn't take it any longer. Mommy and I were sitting together while she taught me some braille, when suddenly the doorbell rang.

"Hey, Sweetie. I'll go answer that, and you keep on, okay? It's probably just someone who wants to sell something."

I nodded, but inside my heart jumped. And . . . the feeling came back. I didn't know why, but maybe it would be answered soon enough.

So I waited until Mommy answered the door, then I got to my feet and snuck back to that place where I kept getting the feeling. But since I already had it, my only clue as to where it was would be if it got stronger. And my itch came back.

Soon enough, I felt something creeping over my shoulders, feeling more real by the second, so I felt around, and I found a door. My hand touched the doorknob, and I twisted it open slowly, feeling my heart pound harder in my chest. I cautiously stepped inside, and I smelled something putrid and purely evil in the room. I felt eyes on me, but when I felt around to see if there was other people in the room, I tripped over a large thing on the floor. The smell overwhelmed my senses, and I kept feeling around, trying to make some sense of this. My hands felt a familiar face, and I started to cry. It was Onee-san!

But why did she feel so cold? Why wouldn't she move? Was she asleep?

"Onee-san," I whimpered. When I got no response, I tried her real name. "Sachiko?"

No response still. Warm, salty tears ran down my face as I tried to get her to say something, do something. I scratched relentlessly at my neck, but my itching refused to go away.

"Onee-san, please talk to me," I cried, shivers crawling down my spine.

I stopped suddenly when I heard a voice in my ear. It was so distorted, so evil-sounding, that I let out another cry. But . . . it sounded familiar.

"Go away!" I pleaded, scratching harder. I had never felt so scared in my life.

An airy touch dropped onto my shoulder, and I let out a shriek at the unexpected sensation.

The same feeling crept up my face and tore at my eyes. My cries turned into screams as the horrifying and painful feeling intensified. But, all of a sudden, I could see shapes forming in front of my eyes.

"It's okay, Nao. You have to get revenge on Mom for the both of us."

Wait, was Onee-san talking to me? But her body still didn't move. What was going on?

All of a sudden, I stumbled again and the pain stopped. I blinked, then realized that I could see again.

I looked around and saw multiple corpses strewn on the floor, dried blood staining the carpet and lifeless eyes staring at me. But one or two corpses had no eyes at all, instead having blank, hollow sockets in the skull, dried blood all over the place.

It smelled like pure evil, and I hated it.

But before I had time to react fully, a presence crept up on me and latched itself onto my body, dictating my actions. The touch reminded me of Onee-san, but was it really her? Or was it something else?

My hand moved and felt around near Onee-san's body, and I simply stared at what had used to be my sister. Her pretty face was smashed, dark red was spattered all over her. I grabbed some random object in my hand, then suddenly I got up mechanically, walking with firm, resolute steps to where Mommy was. Ironically enough, Mommy was looking for me too.

"Nao, where were you? I told you to stay where you were!" she said in an exasperated tone.

Now that I could see, I looked up at her, taking in her looks. She looked like a beauty, bewitching, with long chestnut brown hair pulled into a bun and sparkling green eyes with porcelain-colored skin. But deep down, I knew she wasn't at all what she looked like.

"I'm sorry, Mom," I said in a distorted voice, eerily similar to Onee-san's while still holding traces of my original voice. "But you're not."

My itch became stronger and I reached up to scratch my neck in response to the now familiar feeling as Mom saw the thing that I was carrying. Her face whitened even further.

"Where did you get that?"

I gave her a sweet smile, my left hand slowly feeling heavier, and I simply said:

Pleas for mercy filled my ears, but my course was dead-set. Screams got louder, as I mercilessly raised and lowered my hand over and over. I never lost my smile, but it grew more twisted and crazy. I was filled with a strange feeling, one of maddening ecstasy. I was getting revenge. And it felt wonderful . . .

When I was satisfied, my hand felt lighter, and my knife dropped to the ground, blood dripping everywhere and soaking stains on the oriental carpets. My mother was staring straight at me, the life gone out of her eyes, blood streaming from open wounds all over, and I didn't care. I couldn't.

SO . . . here it is. My original creepypasta. I hope everybody likes it. I'm trying to work on my horror writing skills, but I'm not sure that this turned out okay. Please let me know your thoughts in the comments, and I'll try to keep working! Thanks for reading!

Why is everyone around me so noisy? 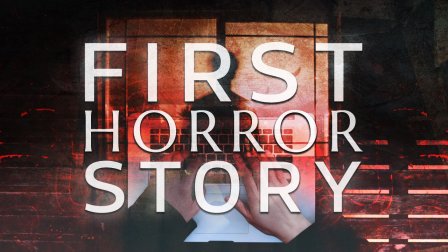