I love everything about this class. But if I have to pick one, I would say my biggest takeaway would be Dylan’s advice to power through the ugly!

I was close to giving up more than a few times during the entire process. It was tough, because I didn’t immediately like what I made and refused to believe that it would work out in the end. But now when I look at the completed work, I’m so glad that I kept at it.

I did the initial sketches on Procreate, and switched to Adobe Fresco when refining. With Fresco, I was creating layers after layers with reckless abandon!

For this class, I decided to use a quote by Detective Chief Inspector Barnaby from the cozy murder mystery tv series, Midsomer Murders. In the series, DCI Barnaby and his sergeant investigate murders in the idyllic fictional English county of Midsomer. There is a whimsical lightheartedness to the show that I hope to capture in this project.

At first, I wanted to frame the quote with quaint cottages and greenery, with the detectives looking down at the chalk outline of a body. I also explored the idea of adding a maypole dance, with ribbons from the maypole looping around the quote. The one I settled on was maypole ribbons morphing into police lines — macabre with a touch of whimsy.

I chose the bottom right layout to flesh out

I applied what Dylan showed in this class: a quick scroll through Pinterest and noting down bits of what I liked without lingering too long on any one picture. Some of my searches were “book covers”, “vintage/retro/midcentury illustrations” and “botanical illustrations”. I also went out to get some faux flowers for sketching.

I’m new to hand lettering so I was nervous and didn’t know where to start. And with so much going on outside the frame, I wasn’t confident that I could balance the artwork. I ended up referencing and tweaking the official tv show title and a condensed sans serif typeface to keep it simple.

I liked this layout but I decided to place the flowers on top of the maypole instead.

During assembly, I had the most difficulty with the maypole ribbons. Specifically, how do the outermost ribbons transition into police lines? If the ribbons are the same width as the police lines, that would mean the maypole children at the top would be holding thick ribbons too. With the big flower arrangement at the top of the maypole, thick ribbons would clutter up the top half of the artwork.

I decided to draw thin lines as ribbons and hide the top half of the outermost ribbons behind some lilies of the valley. Trouble is, the buds of the lilies of the valley face the same direction. As the stem curves, the buds/flowers would all be facing inwards, towards the maypole children and the lettering. I would have loved for this to work in a deliciously ominous kind of way to fit the theme of the artwork. But it just looked too heavy and crowded.

Lilies of the valley facing inwards

I really struggled with color.  I was so hung up on keeping a particular shade of blue because it was the colour of the police lines in the show. And that kind of painted me into a corner. I just couldn’t make the color work with the colors of the floral elements and the quote. At one point I considered a chalk/outline style for the supporting elements as a cop-out. I think I would have liked it eventually if I had gone this direction, but I didn’t pursue it.

I like the colors here when it's just the characters. I couldn't make it work with the other elements, though.

I like how it looks, but it wasn't what I had in mind for this project.

I then remembered that Dylan talks about reality in illustration in the context of achieving balance, and how it’s ok for the illustration to not conform to reality. I found that both incredibly illuminating and freeing. So I got rid of the blue and decided to rock coral instead. After that, it wasn't as difficult to find complementary colors that I could work with. This palette feels lighter and is closer to what I had in mind for the project. Now I find myself quite attached to my completely unrealistic coral police lines!

I used the watercolor brush to apply a green to cream gradient as the maypole ribbon transitions into the police line.

At times, I had the Skillshare video floating picture-in-picture while working in Fresco. It almost felt like I was drawing alongside a friend. To see Dylan pushing through the challenging parts kept me motivated throughout the tricky sections of this project. I really enjoyed this class. I went away with so, so much. Thank you, Dylan!

I've never used the picture-in-picture feature on the Skillshare app before because the video frame is just too small. But it's perfect for this. 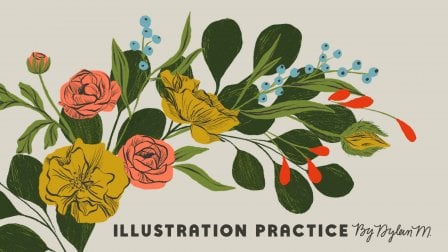