Huh....I guess I can make a book after all!  The way that the process was laid out in the videos and associated materials made it really clear, and each of the individual steps was pretty clear and straightforward.  I went for purple thread and cover paper (as purple's my wife's favorite color and I figured I'd make it for her) with a green cardstock endsheet on the insides of the covers.The only struggle I ran into was in working with the glue.  As I figured for a first try I'd go for what  I could find locally and inexpensively, I got a clear, "tacky" glue that didn't spread as easily or well as what's shown in the videos.  As a result, the back cover's a bit uneven from where the glue was thicker or thinner.

The one thing I also did differently was getting my own thread and then waxing it.  As I'd gotten regular cotton thread, I doubled it over (to give it some more strength and thickness) and waxed it using a block of beeswax.  It overall worked fine, though I did have to struggle a bit more to keep it from getting tangled, especially at first when I was drawing long lengths through as I made the stitches.  I also ended up having to figure out how to deal with a knot I couldn't untie, which eventually meant I cut it out and then re-tied the ends of the thread together.  The resulting knot was a bit of a pain to get through the stitching holes, but nothing too difficult.  I was lucky that that spliced knot ended up on the inside of the book and not in the stitching along the spine where it'd be more likely to show.

One other hobby of mine is leatherwork.  I've done leather covers for books before, and now this has me thinking about not only making a cover, but making my own book to put into the cover! 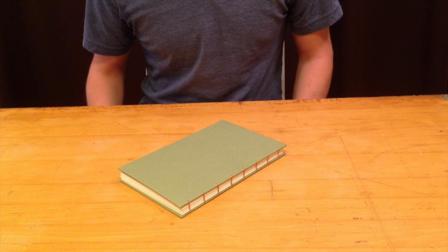