And here's the whole set :) Feedback anyone?

Just about finished with Wall-E!

So when I started out, I took a lot of the colours and details as they were off the original character - I figured I'd edit things out once everything was in place.

But this was the really challenging part - retaining the details and the light and shade and structure but using only five colours. I eventually ended up with two different versions - one where each colour has a darker version of itself, and one where I've created shadows with a whole different colour - blue. I quite like how the second one turned out, though it needs work. *The blue is in there because I need it for R2D2 :)

So after a lot of deliberation, I've decided to make an icon set of movie robots. I went through a whole list and decided to pick the friendly ones to begin with - Wall-E, R2D2, and Weebo (from Flubber).

This whole thing mostly started because I really wanted to do Wall-E, I think.

I've got sketches for all three - here they are:

The rule is that I'm using the circle more as a background, with the robot standing in 3/4th view in front of it. (Or floating, in Weebo's case, that's where the rule breaks and I use a shadow as compensation.)

For Wall-E, the background has a suggestion of his environment which is a great garbage dump, possibly shaded in layers, and a starry sky. I've also added a really tiny plant in there, for fun.

For R2D2 its a desert background - I was playing with the idea of maybe two suns? And maybe a fighter flying across.

For Weebo I'm struggling a bit, because she's indoors - I've got a bookshelf a blackboard for now, trying to see how I can make it better. Would love some suggestions :)

So that's it for now, back with an update soon! Thanks for the class! 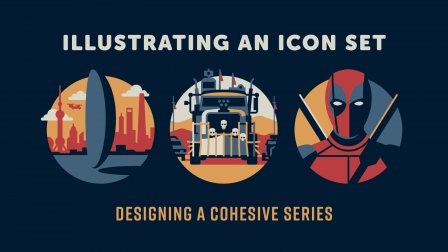