Um, was this the funnest piece I've done in a while? YES. Liz, this class was fun. Did I mention that I had so much fun with this? I'm definitely going to be creating more pieces but when I was finished with this one, I was so happy and wanted to share it so I'm jumping the gun before finishing the class by sharing now. THANK YOU for making this class. So happy to have spent some time with you via the internet. :)

I wanted to create something that was based on my love for the earth. It was of course all stemmed around the original image I found in Flickr Commons (thank you for introducing me to this incredible archive). While most of my artwork is centered around nature and GREENERY, I surprised myself when I didn't include any of it here. I think it almost made me love it even more.

I always forget to capture my work in steps but luckily the iPad lets you work in layers so I was able to turn some off to share my process here. After creating my lady cutout, I added a desert scene. It was much different than my usual go-to but so was this class so I wanted to really stretch  my norm. This one worked well because the log helped with the fact that I didn't have her other foot in the cutout. The image had it cut off so I needed to be creative here.

I decided to add some larger-than-life bees surrounding the woman. I applied a color mask to enhance more of a neon yellow undertone to them so they'd pop.

While I loved the desert scene, I felt that it needed to be broken up with a major contrast. I played a little with water, but ultimately went with a galaxy. You just can't go wrong with galaxies.

I also gave her a line art halo to draw attention to her as a strong figure.

During the creation process, I played with a few elements that didn't end up making the cut such as ocean water and light roses. Neither evoked the vibe I wanted my final piece to present so I opted to remove them and save them for a later project.

My wife saw what I was working on and mentioned that the log she was sitting on should be set in a river, so I added one and it turned out to be the final piece I needed to add. After putting it in, it felt complete!

The surrounding rocks were gray so I applied a color overlay to go along with the desert color scheme.

And voila! A masterpiece was born (haha okay maybe not but it is for me because I had so much fun creating it)!

Thank you again, Liz. Now I'm off to do a blog post on how everyone needs to take this class. ;) 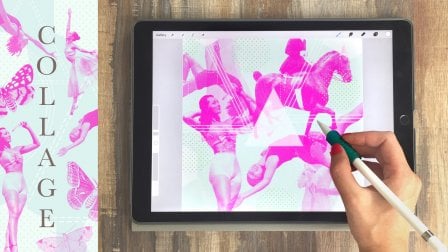