Moon in the Day Sky - Creating a Dragon

A.  Creating Nevela, a baby dragon  I have pictures of each step.

1. I started with a woman (my daughter) holding a lizard

2, I changed (photo edited) the lizard to orange

4. I hand-colored the additions with colored pencil

B.  Kassy's dragon sculptures of Nevela and her mother, Tryphosa

C.  Images of Dragons my readers have created

Legend of the Dragon Carver

E.  Interviews from the point of view of dragons

“We, a delegation of scribes from the United Clans of the Eastern Slope of Rama, have traveled to the North Lands to interview the most ancient bearer of knowledge.  We are here at the Cavern of the Archives and are speaking now with the Great Dragon Sire, Antiquity.  Please tell us, Noble Antiquity, how dragons came to be.”

<<There is much confusion and misunderstanding regarding the subject.>>

“That’s why we’re here, to clear up some of that misunderstanding and to record an accurate account of the beginnings.”

<<I perceive that your intentions are honorable, therefore I will tell you what you request.>>

“Thank you.  We are ready to write your story.”

<<In the old times, Magic continually split the sky stabbing out with jagged swords of light, exploding in balls of flame, and striking any upright thing.

The ancient ones, humans, lived in caves deep beneath the surface of Rama hiding from Magic’s great anger.  When curiosity enticed them to the mouth of the cave, they looked out at a verdant landscape and wished to live in the open air among flowers and streams, but the first lightning flash always drove them away from the vision of freedom and back into the dank interior of the mountain.  No matter how they longed for open spaces, protection was a far more powerful lure.

One among them, a man skilled in the arts of stone work, dreamed of setting his people free.  He ventured near the cave opening, looking out upon the lush world.  Many warned him to flee from the danger, but he told them he must listen to the song the Magic sang.  “Perhaps I will learn the secret of his anger.”

"More likely you will be its next victim!" they cried.

"We will see," he told them as they cowered away from Magic’s wrath.

He returned to them later, appearing as a mad man.  His hair stood on end.  His eyes opened too wide.  He neither spoke nor responded to any, but disappeared into a long tunnel that led deep into the mountain near a lake of fire; a place the old ones seldom ventured.  No one followed him.

When he emerged, he carried a wondrous sphere of carved stone.  The outside was set with jewels and inlaid with gold -- treasures of the mountain.  The shell had a cross hatch design with diamond shaped holes exposing two carved winged serpents on the inside; one of red stone, the other of green.

The clan gathered around him to see the marvelous workmanship, but he pressed through the crowd and made his way to the mouth of the cave.  Thick black and purple clouds boiled in the sky.  Wind whipped the Old one’s cloak and carried the dusty scent of doom.  With the entire clan to witness, he climbed atop a boulder and held the carved sphere above his head.

"Magic!"  He addressed the lightning flashes, "You cry out for a purpose.  I bring you offspring of the mountain.  With your touch, these creatures will breathe.  With your essence, they will live and you will find expression.  Your power will no longer rage in wild fury against every obstacle, but will be channeled as you choose."

Sky fire ripped the heavens.  Screams of terror pierced the roar of the storm as the clan members witnessed fingers of light dancing on the stone sphere, latticework shell, and jewels.  The biting stench of sulfur curled up in a yellow vapor as the light passed through the jewels and focused upon the red serpent inside the sphere.  The green serpent, beside it, began to glow; not from an outside source, but from within. The shell and jewels charred and broke open.  Stone wings began beating the air as Magic infused life into the hatchlings.  The hardness of stone melted into supple iridescent skin; Magic made flesh.

"I name your kind 'Dragon'." declared the Old one.  Before this moment, no dragon had ever existed, but here they were -- A red male and a green female -- new creatures with the mountain as their mother and lightning as their father.

"Dragons."  The Old one called.  They came at his beckoning and lighted, one on each shoulder.  "I will teach you all I know of your elements; the essence of stone and gem.  And you will teach me your song."

"What have you unleashed on us?"  The people grabbed stones and clubs and rushed the Old one.

"Put down your weapons!  It is better this way," he cried.

But they would not listen.  They swarmed up the hill, hurling their rocks.  The dragons cried kitten-like sounds.  The Old one put the hatchlings behind him, shielding them with his body.

"Look at you!" he shouted at his people, "You’ve left your cave and stepped into a larger world!  The dragons have given you freedom!  Go now and enjoy the life you’ve always wanted."

From that time, people went forth upon the land to dwell in the open air.  And the Old one?  He returned to the caves to raise the hatchlings.>> 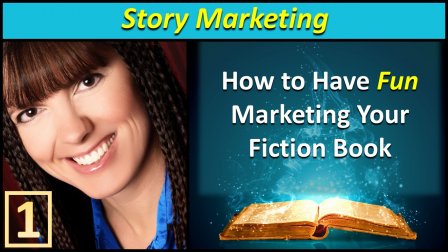 Story Marketing: How to Have Fun Marketing Your Fiction Book
Leah M Berry