Galaxy Assignment:
Things I learned: India ink works a LOT better for the blacks than the black watercolor I'd been using when I painted galaxies. I still sometimes like a dark indigo instead of black. Bombay white ink is NOT opaque and does not cover watercolor/ink. I ended up redoing all the white and white lines with gouache. I have a jar of Copic white on order.  I think I'm a purist. While I kind of like the idea of picking out the constellations, in practice I prefer the look of a Hubble photo to a star chart, even with my favorite constellation of Orion picked out. I think, looking back, that I'd rather have put the constellation in but not the lines connecting the stars. I have ideas for the future of this, though. So we'll see what I do in the future. I hadn't thought of using this technique for other types of backgrounds (although I do something similar with acrylic already! Interesting what we don't think of transferring between media!) Since I took this photo I've acquired some copper ink. I'm planning on adding a touch of it to the nebula and stars...

I tried first on large paper with a salt and water spatter background. (I love the background.. Originally I wasn't fond of the result, until I redid the jellies' tentacles in inks... They pop more now. I'm from Seattle area, originally, and I wanted to get our two main jellies in -- the moon jellies at the top don't have tentacles... they're just like big gumdrops, and fun to hold in your hand. Once every few years they invade one or two harbors in Puget Sound - there are so many of them that they touch - and descend from the surface into the water for about 2 feet deep.  Just solid jellyfish. I've only run into the lion jellyfish on the beach (or the aquarium!) it's the big orange one in the middle. Sizes to scale. The other two are inventions from my brain.

Then I did this one, where I didn't have to worry about the background. In the long run, I like both of them.

I'm not new to watercolor, but most of my learning in it has been looser techniques. I actually came here from Ana's Texture in Watercolor class... decided I wanted to back up and see what techniques she uses in more detail! :)

My Monochrome study was so fun that I did two. And I like them so much that I think they will become crewel designs in a next life for the business. Or maybe greeting cards. Or both? We'll see.

Next up: jellyfish, although I've already been playing with them a bit. I've learned that you really Can't swap pastel paper for watercolor paper and have it work. Durn it. I wanted a pre-colored background! LOL! Practice jellies with no outcome in mind:

Needlework and art. With cats. 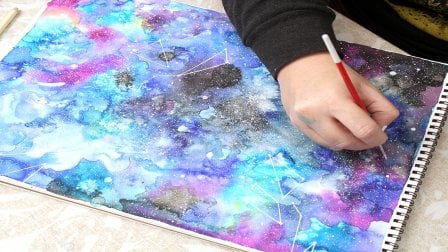