What a fun project! I tried a couple of different ideas and approaches with the three pairs.

Forgive the bad phone photo here. My blue was so washed out, but I decided to let that be an experiment. The yellow was very opaque, and the red was in between. They all worked out ok, but my personal preference was for the ones that were more opaque in the end.

I started with some kind of traditional scandi designs from mittens I found online. note my kung-fu death grip of the pencil. I used prismacolors which have very pretty hues, but definitely took some elbow grease to lay down. This is the first pass.

For the blues, I ingored stich-patterns altogether and went with some of other motifs I was playing with. It is probably something I would have done on the teacups, but I was curious if it would work for mittens, or if I should just stick to stich-patterns. I think its ok in the group, but I definitely like the geometic look on the mittens.

I had the absolutely hardest time with the yellow. When I laid down that musatrd colored paint, I just loved it so much that I agonized about what I would do over it. I don't love the resulting color as much, but I do like what happened with the white ink on top. The waxy pencils repelled the ink so it took on a fuzzy yarn look. Happy accident! This design approach was my favorite in the end.

Then into photoshop they went for some cleanup and fun...

Thank you for a fun lesson! I look forward to doing your teacup one next! 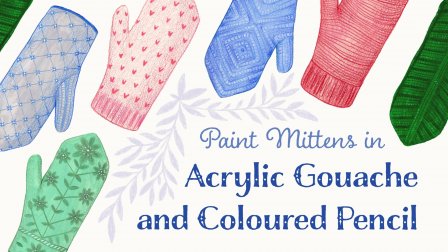