UPDTAE: I have gotten started on my first round of illustration just getting the lines down pat and base color layers on the artwork only. The layout and placement of this artwork comes later after I finish this up. 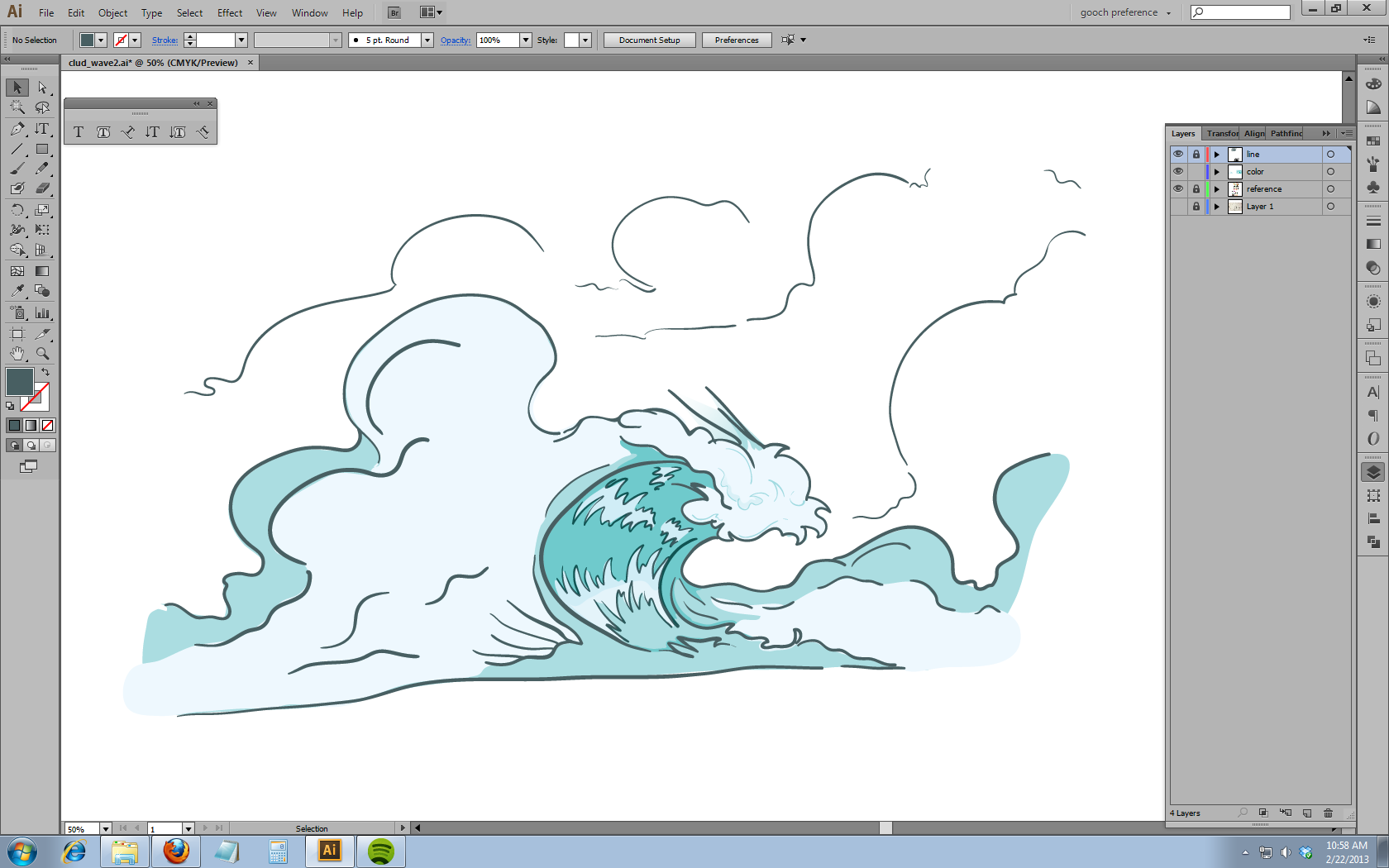 Well I am late to start posting but I have been working through some concepts. For my poster I have chosen to design for the Waves Overhead Tour coming through to the Fillmore Charlotte here in NC next month. Minus the Bear has been one of my favorite bands for some time now. I am somewhat unfamiliar with CIrca Survice and they are co- headlining this tour.

I started my initial idea with a tidal wave in my mind. I couldn't move past it at first and kept seeing a scene from that movie Deep Impact. 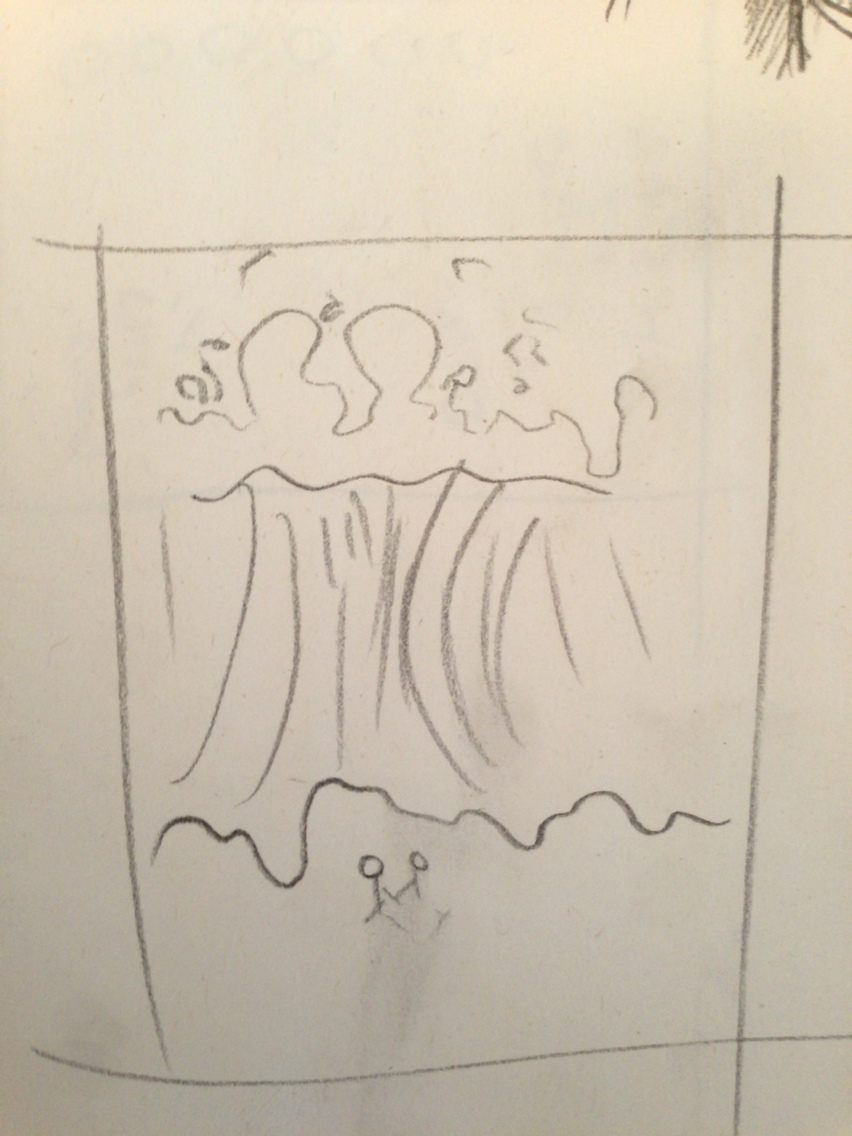 I never felt as if this was a strong idea but I certainly wanted to explore my first instinct.

From there I started thinking of other ways to represent a  large tidal wave and started placing versions of boats in the wake of a giant wave as well just representations of waves. 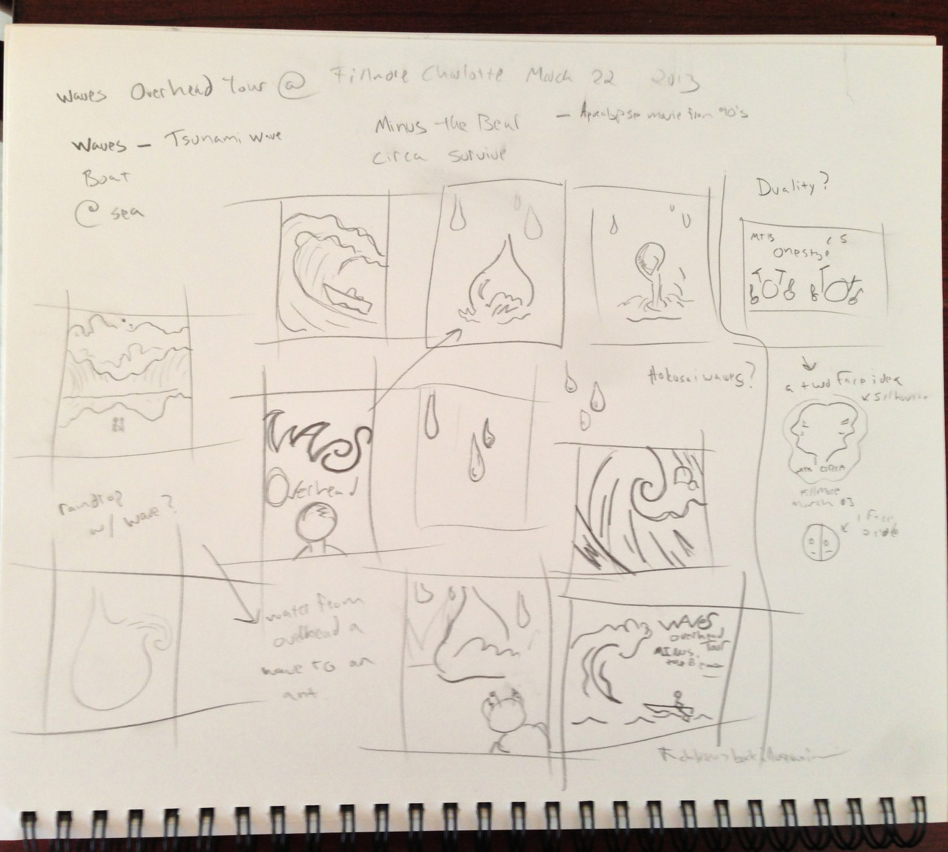 I wanted to move from this idea since I never felt it was really that stong. My mind took me to thinking of different versions of "waves overhead" and I thought how massive a rain drop can feel in scale to maybe an ant or small insect and started looking to ways of interpreting a rain drop into a wave and back and forth with the tidal wave idea. I was still unsatisfied and completely ruled out the boat wave idea for fear of it looking too much like a Hokusai print.

As you can see on the image above I started changing my approach to focus on the duality of the two bands functioning as co-headliners. I started to look for a few ways to focus on them both toying with the idea of building up two sets of instruments in vector shapes side by side on stage and just general ideas of duality. 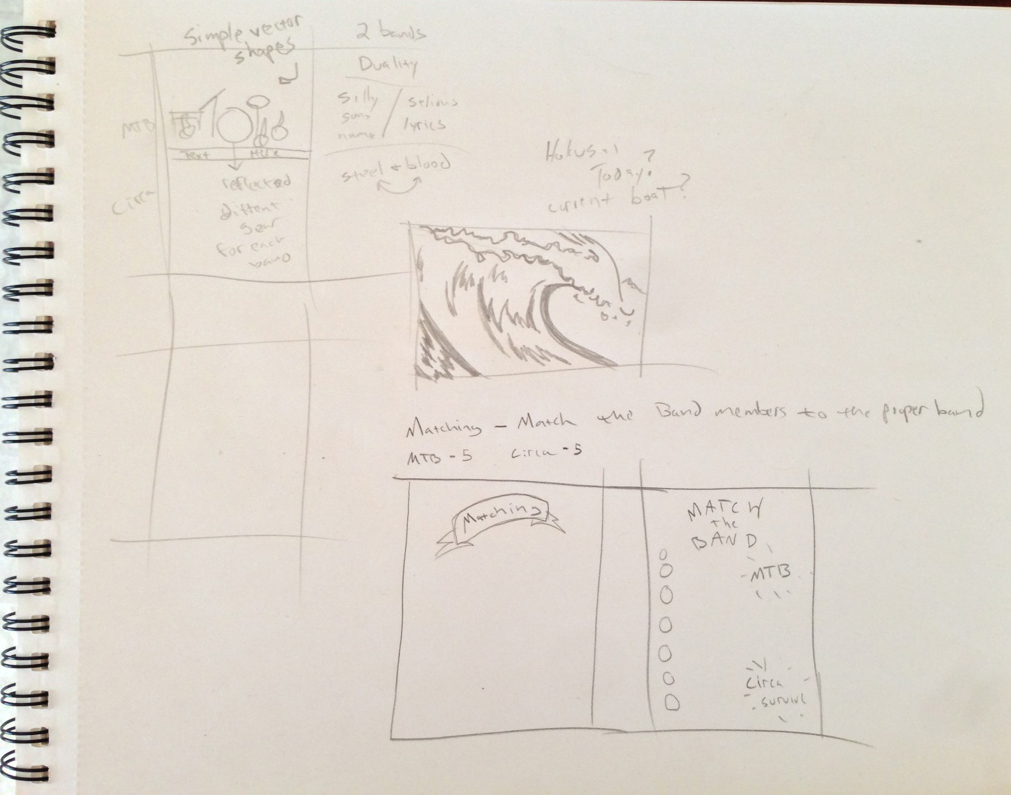 Amongst this I had an idea to create a matching game where I would have vector avatars for each band member and create a matching game to match the members to the correct band like a quiz question. I thought it was a cool idea but realized I don't have the time to fully develop it and build the parts so I moved on. 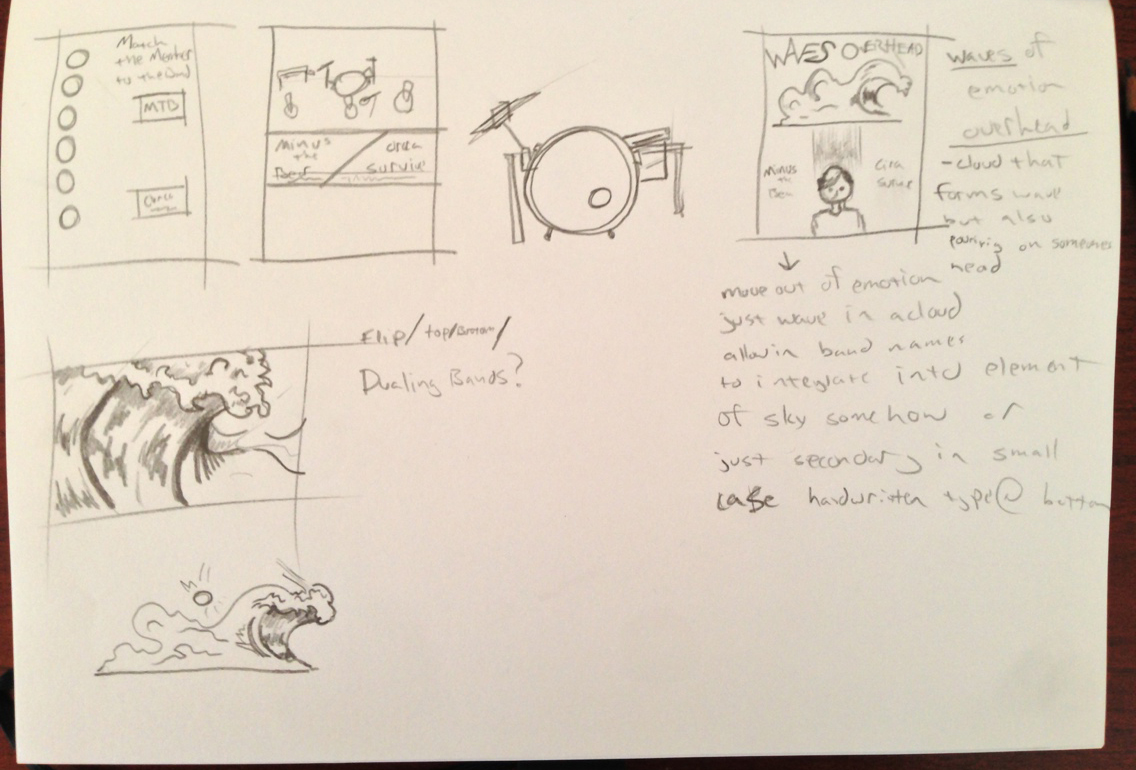 I kept exploring waves and my mind moved to a wave of emotion. When I though of a wave of emotion overhead I had the idea for a cloud of emotion puring over someone and in the thumbnail above you can see I drew a person with that individual cloud overhead raining on them. I can only associate a bit of negativity with that emotion and that's not what I want to represent here but it did take  me to the idea of mixing a wave and cloud into one graphic. Which as a literal interpretation of Waves Overhead should have come to mind a lot sooner. This idea is what I intend to explore a littel further and hopefully complete a poster of. 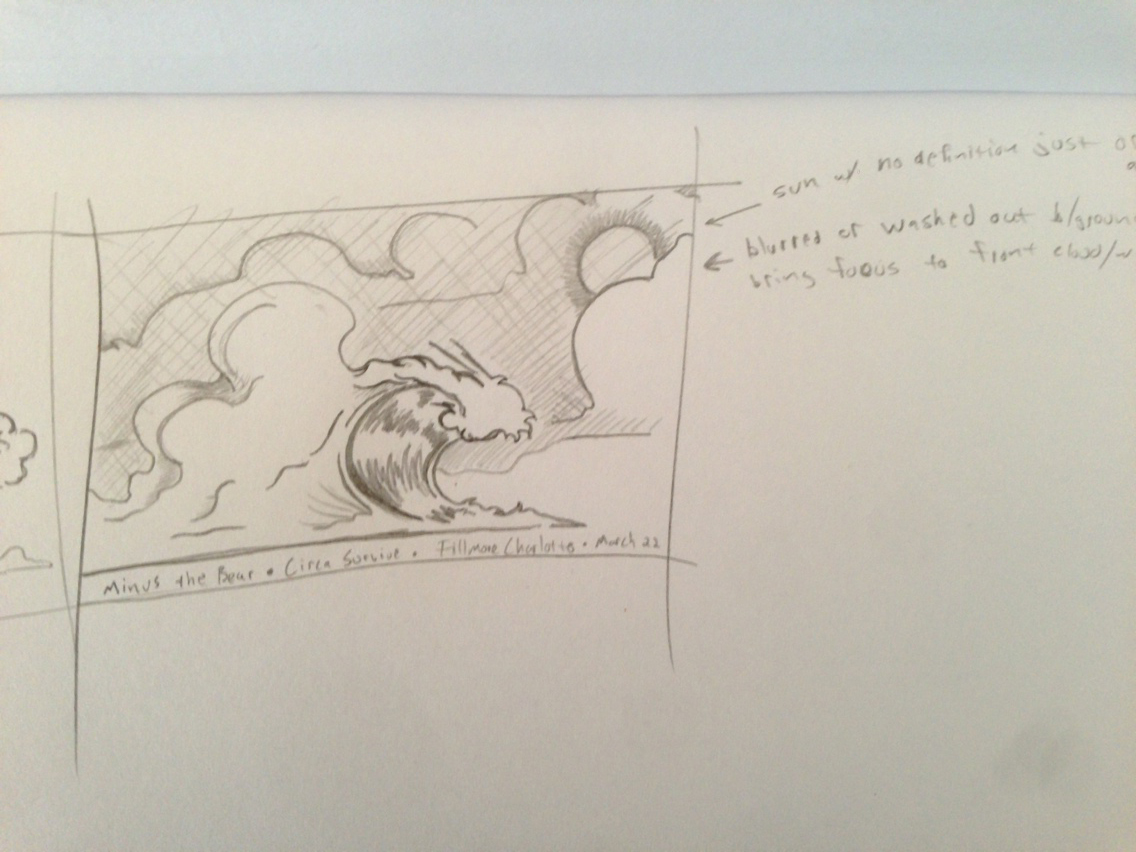