Disclaimer: this is my first attempt at lettering EVER, and my first time putting pen to paper in probably 10 years. So... yeah.

I began by going through some calligraphy exercises, just to get a sense of where the weight on the letters should be. In addition to the great tutorials that Neil posted, I found the following three videos by Paul Antonio helpful: http://www.youtube.com/watch?v=1aUHjuNu-8M&list=PLFAF83B8E5DABB10B. I tried practicing some lines, writing my name, writing my phrase ("Milady De Winter"), and testing out some Copperplate script.

Next, I tried doing copying one of Hamid Reza Ebrahimi's Copperplate videos, resulting in my own personal contribution to the "Nailed It" meme. (In my partial defense, I was using the wrong type of pen nib. Mine was flat, and his was oblique. I didn't realize that 'til later).

Finally, I tried my hand at actually doing some lettering. I used the font PF Champion Script Pro as inspiration, but changed a lot of the details, including the x-height. I had a sketchbook that I bought from Muji, but it wasn't very good, because when I erased, it made the paper rough and difficult to draw on. I wish I'd used Bristol paper or something similar.

I've scanned my progress, but now I need to clean it up and add embelleshing details. Also, I am thinking that some proportions need to be adjusted. For example, the second letter "e" is different form the first "e." I really like the way the "r" came out.

Questions: where do you guys think I should put the swashes and flourishes? Does joining the "M" and the "D" work, or does it look stupid? Is there anything about this that looks unbalanced? Does it look bad that the dot in the letter "i" touches the swash of the capital letter "W"? In general, how can I improve this? Any and all feedback is welcome. Thank you! 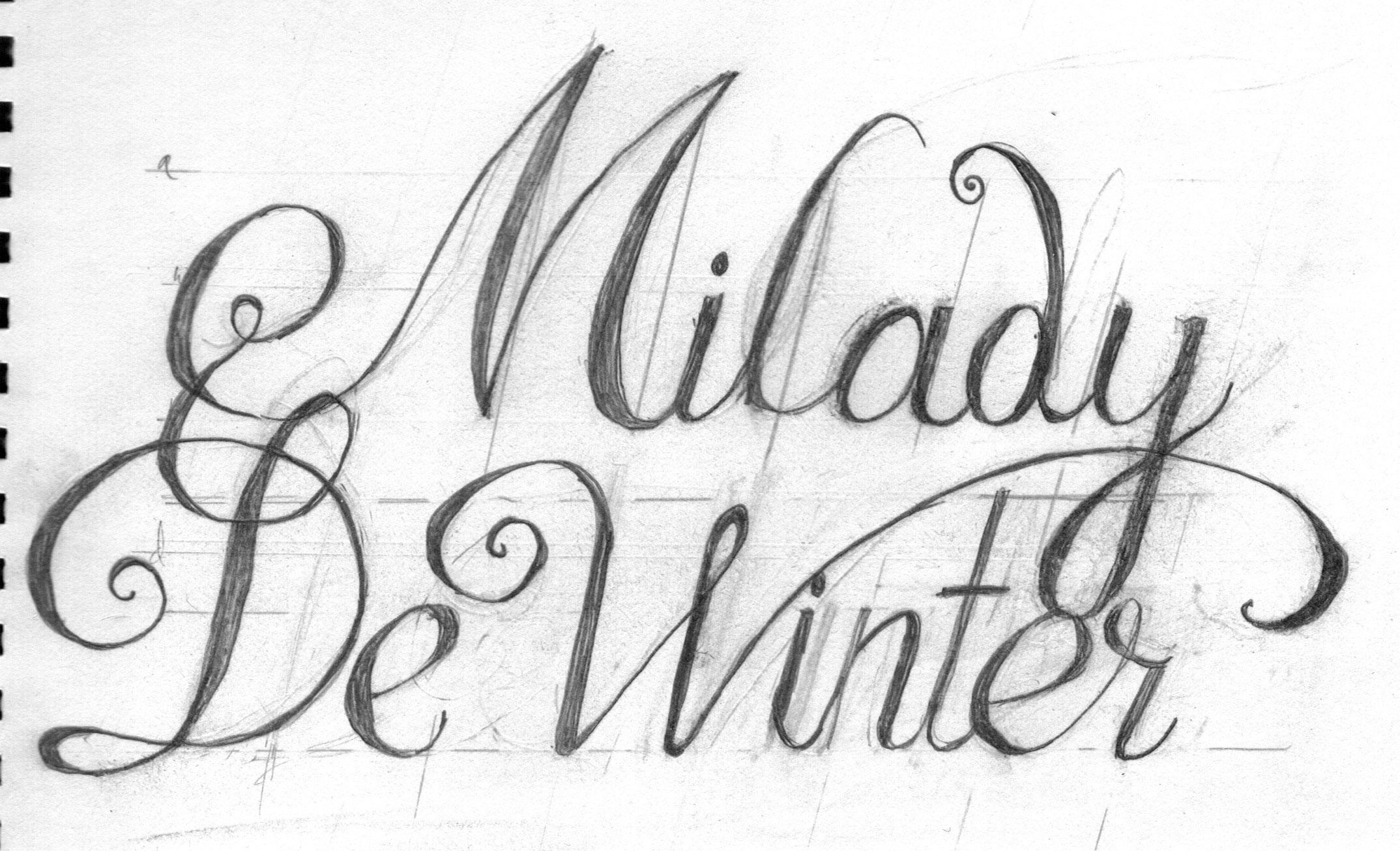 ORIGINAL CONCEPT: When I was a kid, Milady De Winter from Alexandre Dumas' "The Three Musketeers" was my favorite character. She was the original femme fatale.

I also made a portrait of my friend Mildred titled "Milady De Winter." I would like to draw/collage an original title for it. I want it to capture the cold, seductive quality of Milady's character in the book.